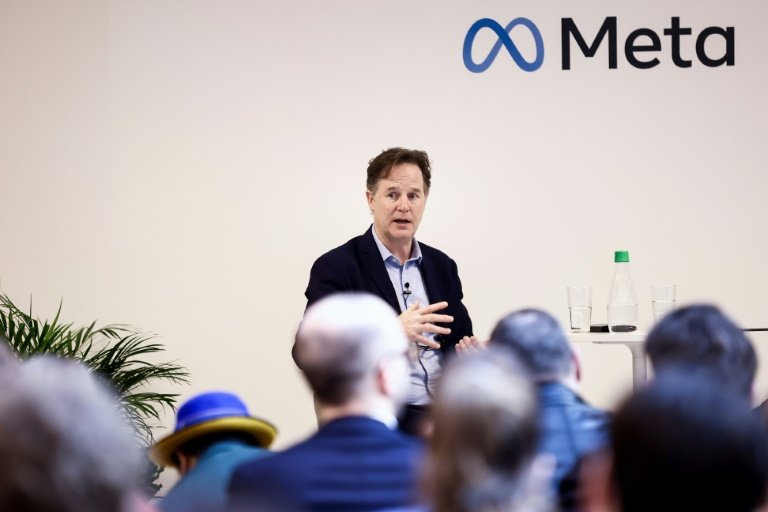 Facebook parent Meta may be in the Big Tech club but it sees itself as being dwarfed by "Giant Tech" company -- and corporate foe -- Apple, a top executive, Nick Clegg, said Wednesday.

"I mean Apple is now, what, eight times the size of Meta" in terms of stock market capitalisation, he said.

The comparison underlines Meta's steep market slide over the past 16 months -- and the bad blood with Apple, which has eviscerated Meta's data collection strategy.

Apple last year introduced a data privacy option on its hugely popular iPhones that prevents Meta and other online data collectors getting user tracking information they previously relied upon to target advertising.

That has contributed to a halving of Meta's third-quarter profits this year.

The US company's costly focus on the metaverse, a virtual world where users appearing as digital avatars can interact, has also played a role.

Meta -- re-branded to reflect its focus -- has spent a staggering $100 billion to date on building that technology, whose widespread adoption is forecast to be many years away.

Meta last month announced it was axing 11,000 employees -- 13 percent of its workforce -- in a general tech belt-tightening that has also seen jobs shed at Twitter, Amazon and Hewlett-Packard.

Apple's over the same period has stayed steadily above $2 trillion since late 2020, and is currently around $2.3 trillion.

Meta has long complained that Apple is building a "walled garden", with its users locked into its devices, operating system and app store, at the expense of Meta and other online players.

Both Meta and Apple, as well as other Big Tech ones, have repeatedly come under the regulatory microscope in the European Union and the United States as commercial strategies butt up against anti-trust and data privacy concerns.

But Clegg said China was increasingly challenging the US domination of the online world.

"You've got US and Chinese big tech now really kind of looming over the whole scene," he said.

"And don't, by the way, underestimate how aggressively Chinese big tech is investing in the metaverse," he added, pointing to the Pico VR headsets being marketed by ByteDance, the Chinese owner of popular social app TikTok.

Meta's own investment into VR and Augmented Reality -- collectively known as XR, or extended reality -- showed its belief that "the biggest bets are the bets which are furthest away... and they're also the ones where the technology is most expensive," Clegg said.

Investor criticism of that focus, and a "narrative of pessimism" about Meta's focus on it, "profoundly underestimates the very, very strong health of the underlying business" of the company, he said.