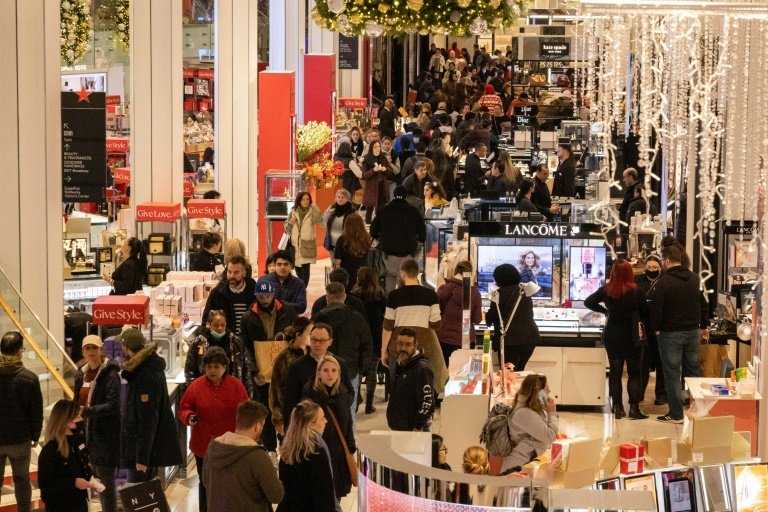 US retailers unveiled a trove of fresh promotions Friday, as they try to coax sales from reticent shoppers whose holiday cheer has been tempered by inflation and worries over a softening economy.

"Black Friday," the unofficial start of the US holiday shopping season, announced itself with the annual day-after-Thanksgiving deluge of online deals and early store openings.

Traffic was steady at Macy's flagship store in midtown Manhattan, where crowds braved drizzly, chilly weather to survey the mammoth department store and take in holiday windows that feature a Santa surrounded by disco balls and fox family of stuffed animals clad in plaid.

But industry experts have been cautious about this year's prospects, in light of price pressures that have exacerbated concerns about an oversupply of goods.

A year ago, retailers faced product shortfalls in the wake of shipping backlogs and factory closures related to Covid-19. To avert a repeat, the industry front-loaded holiday imports this year, leaving it vulnerable to oversupply at a time when consumers are cutting back.

"Today's problem is having too much stuff," said Neil Saunders, managing director for consultancy GlobalData Retail.

Saunders said retailers have made progress in reducing excess inventories, but oversupply will mean deep discounts in many categories, including electronics and apparel.

"This is a holiday season where retailers are going to have to work very hard for very small gains," he said.

The dynamic has created opportunities for savvy shoppers like Carla Forbes, who began scouring for holiday discounts weeks ago. She nabbed a jacket Friday at Macy's for $79, down from an original price of $225.

While promotions on watches and jewelry have got "better," she noted that such deals are not available for staples like food, for which prices have soared. 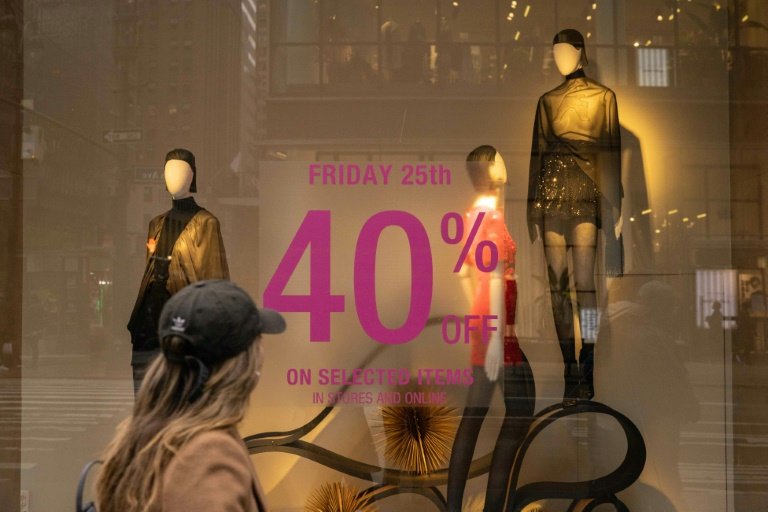 "Black Friday," the unofficial start of the US holiday shopping season, announced itself with a deluge of deals / © AFP

Leading forecasts from Deloitte and the National Retail Federation project a single-digit percentage rise in sales, but this is unlikely to exceed the inflation rate.

Consumers spent  $7.28 billion up through 6:00 pm Eastern time (2300 GMT) for Black Friday, according to Adobe. The company anticipates that when the final tally is in, consumers will spend between $9 billion and $9.2 billion for the day, setting a new record for online sales on Black Friday.

Countries like Britain and France have been marking Black Friday too, but with soaring inflation, merchants there face a similar dilemma.

"The worry is that it could turn out to be more of a Bleak Friday," said Hargreaves Lansdown analyst Susannah Streeter.

Anne Campbell, who was visiting New York from Scotland, said the mood felt very different from home, where worries about energy security and a weakening economy dominated.

"Things are very tight in the UK for a lot of people," she said, contrasting this with spending in the US.

US shoppers have remained resilient throughout the pandemic, often spending more than expected even when consumer sentiment surveys suggested gloominess.

Part of the reason has been the unusually robust state of savings, with many households banking government pandemic aid payments at a time of reduced consumption due to virus restrictions.

But that cushion is starting to whittle away. After hitting $2.5 trillion in excess savings in mid-2021, the benchmark fell to $1.7 trillion in the second quarter, according to Moody's.

Accompanying this drop has been a rise in credit card debt visible in Fed data and anecdotally described by chains that report more purchases made with food stamps.

Target stood on the downcast side, pointing to a sharp decline in shopping activity in late October, potentially portending a weak holiday season.

"We've had a consumer who has been dealing with very stubborn inflation for quarter after quarter now," Chief Executive Brian Cornell told a conference call with analysts.

He added that customers are "shopping very carefully on a budget."

But Lowe's, another US chain specializing in home-improvement, described the same late-October period as "strong."

Friday's crowds in New York were more robust compared with a year ago, said shopper Marvin Thomas, who also ventured out for Black Friday in 2021.

Inflation is a "big problem," he told AFP, catching his breath outdoors after finding a deal on a hat at Foot Locker.