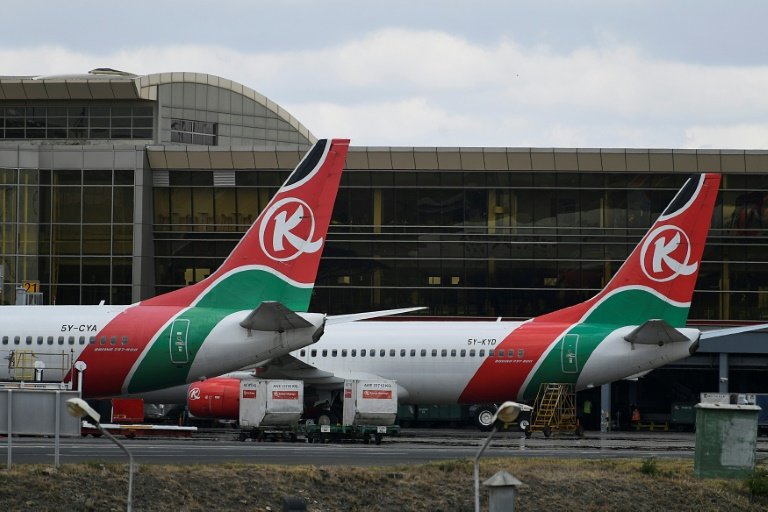 Kenya Airways pilots launched their strike on Saturday in defiance of a court order against the walkout. / © AFP/File

Kenya Airways cancelled most flights Monday as a pilots' strike entered its third day, with thousands of travellers stranded and the government threatening disciplinary action if staff don't return to work.

The pilots launched the strike at Nairobi's Jomo Kenyatta International Airport at 06:00 am (0300 GMT) on Saturday, defying a court order against industrial action and leaving thousands of passengers stranded.

"Due to the ongoing unlawful industrial action by Kenya Airline Pilots Association (KALPA), most of our flights have been cancelled," the carrier said in a statement, which came hours after the country's transport minister threatened the protesting staff with disciplinary action.

The strike has exacerbated the woes facing the troubled national carrier, which has been running losses for years, despite the government pumping in millions of dollars to keep it afloat.

The airline, which is part owned by the government and Air France-KLM, is one of the biggest in Africa, connecting multiple countries to Europe and Asia.

On Sunday, Transport Minister Kipchumba Murkomen urged the pilots to return to work, warning them against "defying a court order".

"Considering the defiance of KALPA and their total disregard for the existing court order –- which is at the heart of the rule of law -- the Ministry of Labour now has to activate the procedures governing industrial relations," the newly-appointed minister said.

KALPA has not responded to the government warning but said earlier on Sunday that the strike would continue for the foreseeable future.

"The public should expect major flight disruptions t continue," it said on Twitter, blaming the airline's management for failing to resolve the stalemate.

On Sunday, the airline said 56 flights had been cancelled due to the strike, disrupting 12,000 passengers' plans.

The protesting pilots, who make up 10 percent of the workforce, are pressing for the reinstatement of contributions to a provident fund and payment of all salaries stopped during the Covid-19 pandemic.

Last week, the airline won a court injunction stopping the strike, but an official at KALPA, which has 400 members, told AFP the pilots "were acting within the provisions of the law" and that they were yet to be served with a court order.

The carrier has warned that the strike would jeopardise its recovery, estimating losses at $2.5 million per day if the pilots went ahead with their plans.

The airline was founded in 1977 following the demise of East African Airways, and flies more than four million passengers to 42 destinations annually.

It has been operating in large part thanks to state bailouts following years of losses.