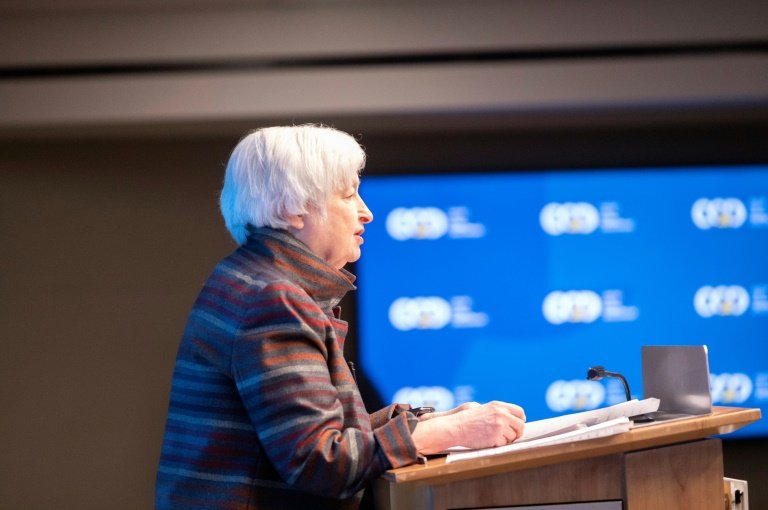 Treasury Secretary Janet Yellen remarks at the Center for Global Development on October 6, 2022, came just days before policymakers were set to gather in Washington for the annual meetings of the International Monetary Fund and the World Bank / © AFP

The World Bank and development lenders need to evolve to tackle the complex challenges that the world is facing, such as by going beyond country-based lending, US Treasury Secretary Janet Yellen said Thursday.

Her comments, delivered at the Center for Global Development think tank, follow warnings that global recession risks are growing on the back of shocks like the coronavirus pandemic and Russia's invasion of Ukraine.

"Emerging markets and developing countries are often most acutely affected both by global shocks and by spillovers from the policies of advanced countries," said Yellen.

While efforts to combat poverty have mostly been country-focused in the past, a different approach is needed in the face of problems such as climate change and pandemics, she said.

Yellen's remarks come days before policymakers gather in Washington for the annual meetings of the International Monetary Fund and World Bank.

"I, along with leaders from a broad group of countries, will be calling on World Bank management at the annual meetings next week... to develop a World Bank evolution roadmap by December," she said.

The meetings come at a tough time for the global economy, which has largely controlled the virus but faces surging inflation and rising interest rates that threaten to choke off nascent recoveries.

"We welcome the discussion on capital adequacy and Secretary Yellen's leadership on the evolution of international financial institutions," said a World Bank spokesman.

While multilateral development banks have a strong record of financing national projects like infrastructure, there is not yet a "sufficiently robust toolkit" to quickly address cross-border challenges, said Yellen.

For example, there could be moves to lower costs of financing for investments where benefits are shared broadly by the world, like in clean energy projects, the Treasury official added.

Apart from the traditional country-based lending model, Yellen called for considering expanded options, such as for development banks to support both global and regional entities.

She noted that global organizations like Covax were key to speeding up the rollout of Covid-19 vaccines to developing countries.

On Thursday, the Treasury also announced a new nearly $1 billion contribution to the Clean Technology Fund, a climate investment fund.

Yellen also urged for major bilateral creditors to "meaningfully participate in debt relief" to help lower- and middle-income countries, noting that China in particular has delayed providing debt treatments to borrowers in distress.