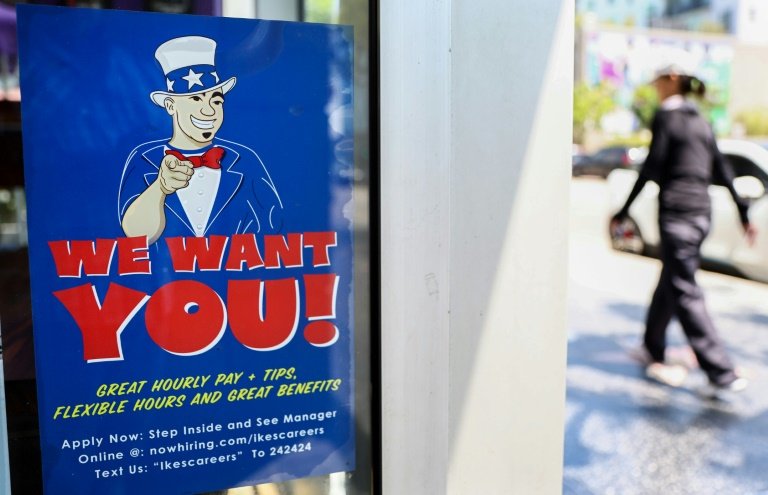 All eyes are on the release of US jobs figures, with analysts warning that an a reading above expectations could spark another sharp drop on markets / © GETTY IMAGES NORTH AMERICA/AFP

Global equity markets mostly fell Thursday and the pound retreated once more against the dollar ahead of key US jobs data as IMF chief Kristalina Georgieva warned of rising global recession risks.

Oil prices advanced, building on gains made before OPEC and other major producers led by Russia decided to slash output by two million barrels a day.

OANDA market analyst Craig Erlam said European markets erased early gains as "investors take a cautious approach" ahead of Friday's release of the critical US jobs report that could influence the Federal Reserve's next move.

Wall Street also endured a dreary session, with the S&P 500 losing one percent on worries that a better-than-expected employment data could send stocks lower due to expectations for more aggressive interest rate hikes.

"You'd have to be very courageous to make a big bet today before the jobs data," said Gregori Volokhine of Meeschaert Financial Services. "Today people are playing the waiting game."

Stocks snapped higher at the start of the week after disappointing US economic data fueled hopes of a moderation in the Fed's efforts to counter inflation.

"The narrative in recent days of weaker data being positive as it could be a precursor to slower tightening didn't seem sustainable and it's already proving to be the case," added Erlam.

Instead, he said he believed the rally to be a response to the sharp drop in shares in the previous weeks as the Fed made clear it would keep raising rates until inflation is brought down, even if that triggers a recession.

In a speech ahead of the IMF's annual meetings next week, IMF chief Kristalina Georgieva urged policymakers to address rampant inflation.

She acknowledged that if central banks move too aggressively to tamp down price pressures, it could trigger a "prolonged" economic downturn.

But in an interview with AFP, she said policymakers "have to stay the course," because right now "The risk of doing not enough is bigger than the risk of doing too much."

Oil prices advanced further after the announcement from OPEC+ nations on the biggest reduction in output since the Covid-19 pandemic.

The move should support crude prices, but as high oil prices have been stoking the inflation that is driving central banks to raise interest rates, the move will further exacerbate the situation.

"The oil producing nations want to support the oil market, but a high oil price hurts most nations, so in a roundabout way, the move will probably add to global inflation," said analyst David Madden at Equiti Capital.

The pound tumbled against the dollar after Fitch ratings agency lowered the outlook for British debt to negative from stable.

This comes after the government of new Prime Minister Liz Truss recently announced a budget packed with debt-fueled tax cuts.

"The large and unfunded fiscal package announced as part of the new government's growth plan could lead to a significant increase in fiscal deficits over the medium term," Fitch said in a statement.

"We consider that statements by the Chancellor (finance minister) hinting at the possibility of additional tax cuts and the likely modification of fiscal rules legislated in January reduce the predictability of fiscal policy."

Shanghai - Composite: Closed for a holiday