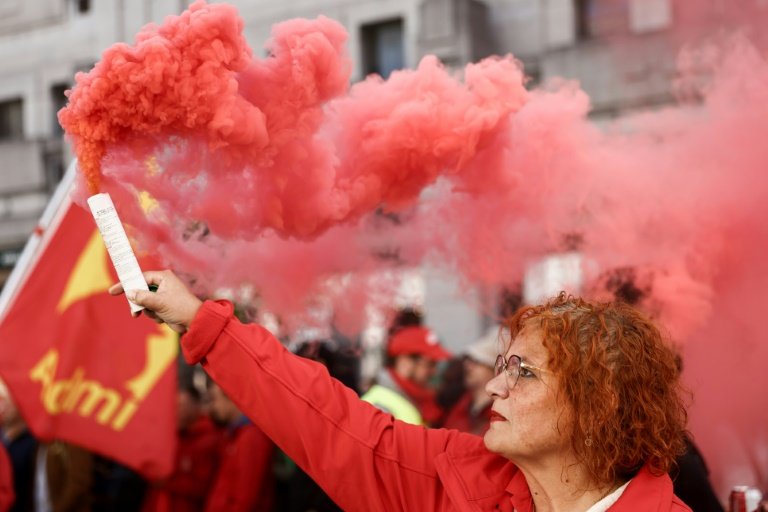 Stoked by a staggering 40.8 percent rise in energy prices, the yearly inflation rate in the 19-country single currency area hit its highest level since records began, according to Eurostat.

Nevertheless, markets in Paris and Frankfurt ended the day with gains of over one percent, pushing higher after recent losses.

London stocks also ended the day with a small gain as the British pound advanced again following the Bank of England's surprise intervention in the bond market Wednesday after sterling sank to an all-time low against the dollar.

"Sterling has been all over the place this week," said Fawad Razaqzada, analyst at City Index and Forex.com. "For traders, the pound is a confusing arena to be in right now."

A poll Friday showed 51 percent of people think new UK Prime Minister Liz Truss should quit after championing a large tax cut in a bid to boost the economy that drew an unusual public rebuke from the International Monetary Fund.

Back in New York, major indices again finished decisively lower to conclude another difficult week defined by worries over inflation and the worsening Russia-Ukraine conflict.

Meanwhile, a closely-watched measure of US inflation released Friday showed the annual pace of price increases slowed slightly in August compared with the prior month.

However, the inflation rate still exceeded analyst expectations, a dynamic that will likely keep the Federal Reserve on its current path to hike interest rates aggressively. The yield on the 10-year US Treasury note, a proxy for interest rates, rose closer to four percent.

In Asia, Shanghai dropped as data showed China's manufacturing and services sectors struggled again in September from Covid lockdowns in parts of the country that have battered the world's number-two economy.

There was also little reaction to news that Beijing would allow some cities to reduce mortgage rates for first-home purchases as it tries to support the property market.

Market sentiment continues to be eroded by rising fears about developments in the Ukraine war, as Russia annexed four occupied regions of its neighbor Friday, with President Vladimir Putin threatening to use nuclear weapons to defend the territories.