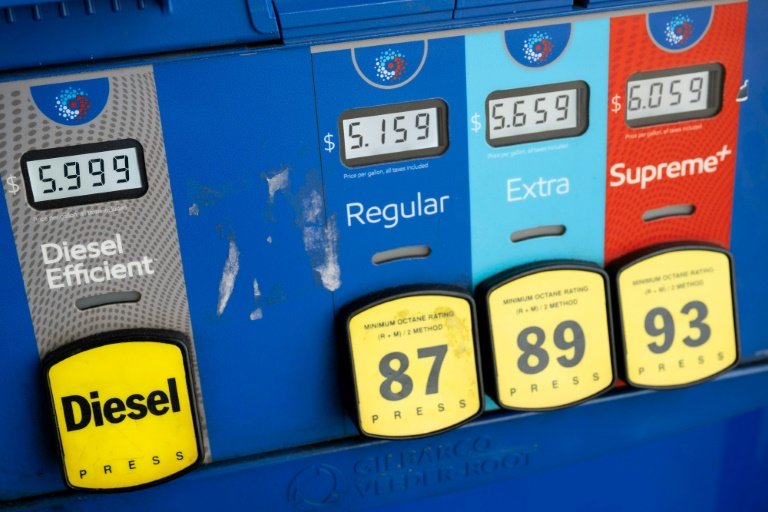 World stock markets mostly sank Thursday on intensifying recession fears, while oil prices receded after an OPEC decision to proceed with a limited boost to output.

London ended the day down two percent, with both Frankfurt and Paris close behind.

That followed a largely downbeat performance in Asia, although Shanghai rose after data showed a forecast-beating improvement in China's services sector on easing Covid restrictions.

Later on, Wall Street joined the sell-off, with major indices falling around one percent, concluding the S&P 500's worst first six months of a year since 1970.

Crude futures slumped as major oil producers led by Saudi Arabia and Russia kept to a decision on a limited boost to output despite the risk that high oil prices may help push the global economy into recession.

"Stock markets have fallen heavily in June so it seems only fitting that they're ending the month with big losses as reality continues to bite," said Craig Erlam, senior market analyst at trading platform OANDA.

"There really is a lack of good news for investors to cling onto, and the near-term outlook looks bleak."

The threat of an extended period of elevated inflation and painful interest rate hikes has left traders fretting over the threat of a prolonged economic downturn, while the Ukraine war continues to sow uncertainty.

Sweden's central bank on Thursday announced its biggest hike in 22 years, raising its main rate by 50 basis points to 0.75 percent.

There had been hope that policymakers would ease off their hikes as economies show signs of slowing, but analysts say some officials are less concerned about a recession than letting prices run out of control.

US data released Thursday showed that a key annual inflation measure held steady at 6.3 percent in May, but spending rose just 0.2 percent in May, less than half the increase in April and part of a steady downward drift as consumers pull back amid surging prices.

But when inflation is taken into account, the data show a decline in real consumer spending, analysts said.

Two weeks ago, the Federal Reserve enacted a supersized three-quarters of a point interest rate hike, the biggest increase in nearly 30 years. Markets are weighing whether to expect the same thing in July.

"Inflation came in a little bit better than expected today but probably not good enough to prevent the Federal Reserve to raise interest rates 75 basis at the next meeting," said Tom Cahill of Ventura Wealth Management.

"At the same time we had the personal spending coming in negative for the month in real terms," Cahill said. "People are starting to get the sense that perhaps the Federal Reserve is going to push the economy into recession."