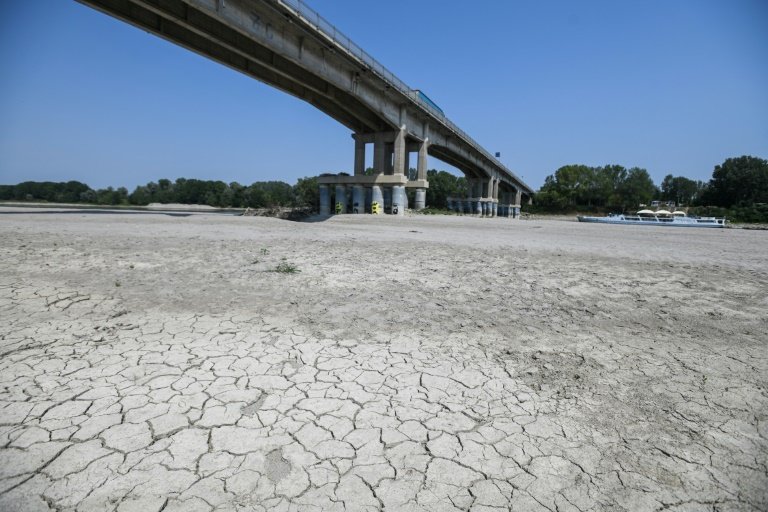 The Po River is suffering its worst drought for 70 years.  / © AFP

Hydroelectric power in Italy has plunged this year thanks to a drought that has also sparked water restrictions and fears for agriculture, industry sources said Friday.

Hydropower facilities, mostly located in the mountains in the country's north, provide almost one fifth of Italy's energy demands.

But the lack of rain is causing problems, at a time when Rome is desperately trying to wean itself off its dependence on Russian gas due to the war in Ukraine.

"From January to May 2022, hydro production fell by about 40 percent compared to the corresponding period in 2021," a spokesman for Utilitalia, a federation of water companies, told AFP.

"Hydro production has been steadily decreasing since July 2021," he said, blaming "the severe shortage of water even at high levels".

An industry source told AFP that while the situation was constantly changing, estimates for the first six months of 2022 suggest nationwide hydroelectric generation will be almost half the equivalent period of 2021.

One small plant near Piacenza, southeast of Milan, was shut indefinitely on June 21 due to low levels on the River Po that feeds it, the Enel energy company said.

"Considering the current drought situation, other hydro plants are not operating at full capacity," a spokesman added, without giving further details.

The Po River is Italy's largest reservoir of fresh water. Much of it used by farmers, but is suffering its worst drought for 70 years.

Italy's largest agricultural association, Coldiretti, said the drought is putting over 30 percent of national agricultural production and half of livestock farming in the Po Valley at risk.

On Friday, the northern region of Lombardy called a state of emergency due to the drought, that recommends, among other measures, less water use by consumers and directs mayors to curtail non-essential water use, such as street washing and watering parks and sportsgrounds.

Further to the west in Piedmont, water is being rationed in more than 200 municipalities, according to the ANSA news agency.

The Maggiore and Garda lakes are both far lower than usual for this time of year, while further south, the level of the River Tiber that runs through Rome has also dropped.