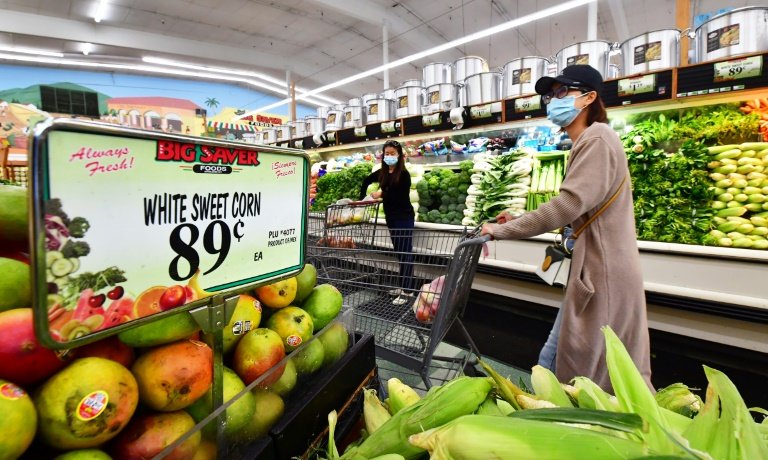 Food and energy prices have surged since the Russian invasion of Ukraine, but US inflation showed signs of easing last month / © AFP/File

The relief was good news for consumers who have been the key support for the US economy, but also for President Joe Biden who has made battling rising prices his top domestic priority.

Surging prices at the grocery store and at the gas pump have hit families and become a political liability for Biden and his Democratic party heading into midterm congressional elections in November.

The world's largest economy has been battered for months by a cresting inflation wave, made more painful by the surge in energy prices sparked after Russian leader Vladimir Putin ordered the invasion of Ukraine in late February.

Over the last 12 months, the key inflation measure slowed to 6.3 percent, according to the data.

Biden cheered the signs of progress.

"This morning's decline in inflation is a sign of progress, even as we have more work to do," he said in a statement.

"At the same time, inflation is still too high and Putin's price hike continues to impact food and energy prices."

He noted that annual core inflation for the latest three months averaged around four percent compared to six percent in the three months before it.

The central bank has launched a counter-offensive against inflation with a series of aggressive interest rate hikes to cool the economy.

The process began in March and was followed early this month by a half-point increase, the biggest since 2000, and the Fed signaled similar big hikes are likely in June and July.

Fed policymakers argue that the US economy is strong enough to withstand the increased borrowing costs, and though the hot housing market has cooled, consumers show no signs of reducing spending.

Buoyed by rising wages, US personal income rose 0.4 percent compared to March, while personal consumption expenditures (PCE) increased 0.9 percent, slower than the prior month but far stronger than analysts were expecting.

But economists caution it may be too early to declare victory on inflation, given the continued pressure from the conflict in Ukraine on food and energy prices, and ongoing impact on supply chains from the Covid-19 lockdowns in China.

"Consumer spending remained resilient in April. That is a double-edged sword as those gains are creating a floor for how much inflation can moderate on its own," said Diane Swonk, chief economist at Grant Thornton.

"In response, the Fed will have to more aggressively rein in demand to align with a supply-constrained economy."

She said central bankers aim "to avert rather than repeat the mistakes of the 1970s."

Outlays on services were the biggest element of the increase in spending last month, led by food services, but also travel, hotels, housing and utilities.

The report said spending rose across all categories, except for gasoline, led by outlays on autos.