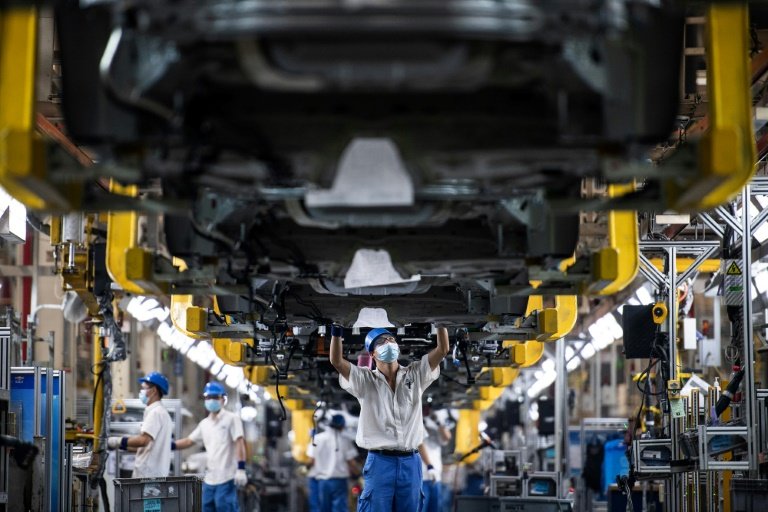 Wall Street stocks rose for a second straight session Thursday on a mixed day for global equities, while China's premier offered an unusually stark warning as the country's zero-Covid strategy bites into growth.

After a positive session in Europe, the S&P 500 finished Thursday's session up two percent, positioning the broad-based US index to potentially snap a seven-week losing streak depending on Friday's session.

"The market was very oversold, and way overdue to bounce," Adam Sarhan of 50 Park Investment said shortly before the market closed. "And what's happening now, the market is bouncing pretty strong."

Stock markets have taken a beating this year as central banks have begun to raise interest rates in order to curb the highest consumer price rises in decades.

But US stocks pushed higher on Wednesday after investors took a positive view of the Federal Reserve minutes, which raised hopes that while the central bank would move aggressively to lift interest rates, it might be able to halt additional rate hikes as soon as this summer if inflation recedes.

Wall Street kept up the positive momentum Thursday following strong earnings reports from a range of retailers including the discount firm Dollar Tree, as well as department store Macy's and the more upscale Williams-Sonoma.

Besides the strong retailer results, moves by Southwest Airlines and JetBlue Airways to lift their revenue forecasts -- another sign of strong consumer behavior -- also boosted the momentum.

Earlier, Asian markets had a mixed session after China's premier warned of more economic difficulties ahead.

In some ways, the challenges now are "greater than when the pandemic hit hard in 2020," Premier Li Keqiang told a State Council meeting on Wednesday, according to a readout by the official Xinhua news agency.

"We are currently at a critical juncture in determining the economic trend of the whole year," Xinhua quoted Li as saying.

China is the last major economy welded to a policy of mass testing and hard lockdowns to eliminate virus clusters, but the strict curbs have battered businesses.

Li's remarks are the latest in a growing chorus of calls from officials and business leaders for more balance between stopping the virus and helping the ailing economy.

Meanwhile, oil prices surged above $117 a barrel, hitting levels not seen since March, fueled in part by strong gasoline demand in the United States ahead of the Memorial Day weekend, the traditional start of the summer driving season.

Shares in Broadcom climbed 3.6 percent, while those in VMware rose 3.2 percent.