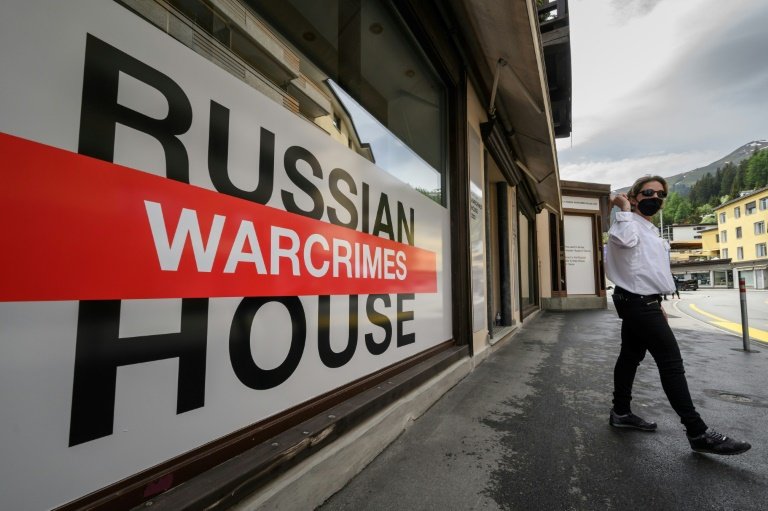 With Russians banned from Davos, their den in the Swiss mountain resort was taken over by Ukraine and given a new name: "Russian War Crimes House".

The "Russia House" was traditionally used by Russians to hold events and network during the annual World Economic Forum in the Swiss Alps.

But organisers excluded them from the meeting of the world's business and political elite following Moscow's invasion of Ukraine.

Instead of a place to entertain, the house with red shutters on Davos' main street is now used by Ukrainians to display the atrocities the say Russia is committing.

It features photos of cemeteries, people in body bags, a bloodied hand on a pavement, a child in a respirators in a hospital, a baby in a soldier's arms, buildings in ruins.

Ukrainians are using the building to hold several events during the four-day Davos summit as part of efforts to win more support against Russia, three months after the invasion began.

"If we tell the story of this tragedy as wide as possible, maybe it will save some lives," said Ukrainian oligarch Viktor Pinchuk, whose foundation is among the organisers of the event.

After the presentation at the "House of Russian War Crimes", Ukrainian President Volodymyr Zelenksy used the WEF congress to plead for more weapons for his country, and more sanctions against Russia.

A parade of Ukrainian lawmakers and officials attended other events on the summit's first day to hammer home the need for weapons and sanctions to defeat Russia.

At the "Russian War Crimes House", the goal is to bring attention to the alleged atrocities committed by Russia.

Next to the photos, an entire wall is covered by a map that lists the "war crimes" committed by Russia. 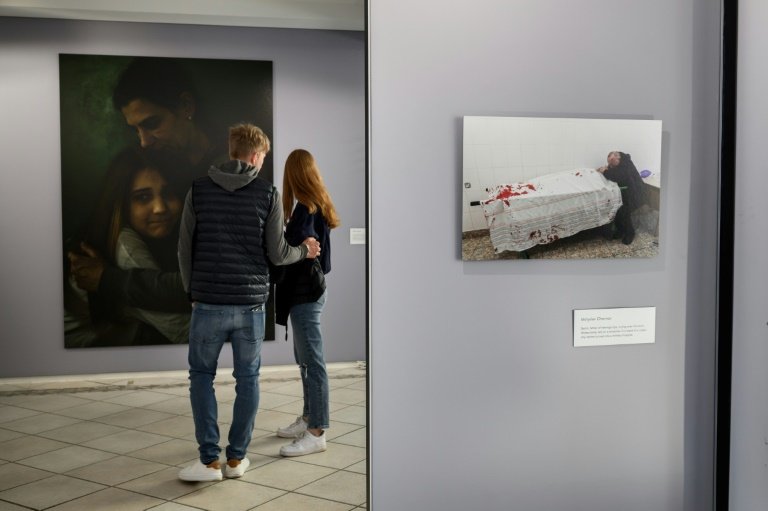 Detailed figures for each region are written across the map, except in some places such as Mariupol, where there are only question marks following Russia's relentless assault on the southeastern port city.

"Today we need you," Andriy Yermak, head of the Ukrainian presidential administration, said in a video appearance at the "Russian War Crims House".

"We are fighting not just for ourselves. The fate of Europe and the world is a stake," Yermak said.

Doctor Oksana Kyrsanova travelled to Davos to testify about her last days in a Mariupol hospital that no longer had any heat or medicine.

"Small children were brought in very critical condition ... and we couldn't help them," she said.

She recalled the death of a pregnant woman.

"Can you imagine: how (do) you put in a black sack a young woman and a baby?" she said. "It was the most awful day." 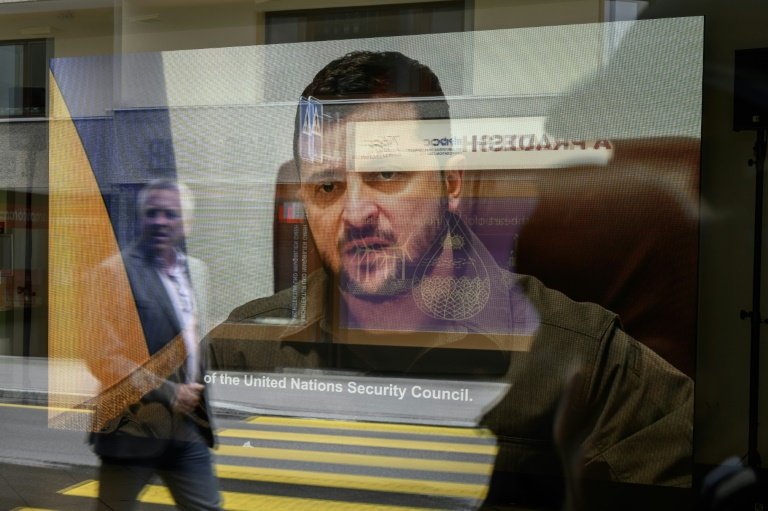 Ukrainian President Volodymyr Zelensky, seen here on a video at the Russia House, also used the World Economic Forum to to plead for more weapons for his country, and more sanctions against Russia / © AFP

The mayor of Bucha also made it to Davos.

His town became synonymous with allegations of war crimes by Russian troops since dozens of bodies in civilian clothing were found lying in the streets, some with their hands tied, after Russian forces left on March 31.

"Why would they kill the peaceful civilians of our town?" said Mayor Anatoliy Fedoruk.

"I believe the WEF is the platform where Ukraine should be present and talk of the crimes of the Russian federation," he said.

This happened, he added, "because the crimes weren't punished in the past"

"We sincerely hope that there will be justice."