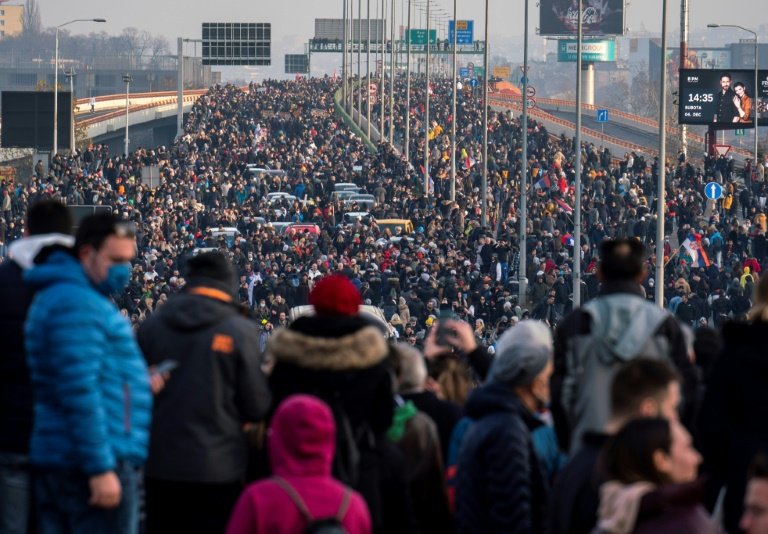 Serbian authorities have abandoned plans to build a controversial lithium mine, the prime minister said Thursday, following weeks of protests against the project set to be built by Rio Tinto.

The surprise U-turn from the government comes months ahead of likely national elections with President Aleksandar Vucic's administration looking to shore up support from voters following a series of major protests that gained traction across large swaths of the Balkan country.

"We have fulfilled all the demands from the environmental protests and have put an end to Rio Tinto in the Republic of Serbia," said premier Ana Brnabic during a televised address.

"Everything about the Jadar project is finished," she added, referring to the mine that was set to be built in western Serbia.

The mining project appeared to tap into smouldering anger against Vucic's government, which has been lambasted by critics and activists for allegedly turning a blind-eye to the potential environmental harm that could by unleashed by the projects of foreign firms.

For weeks, thousands have swarmed key roads across Serbia to protest against the government's handling of the lithium project.

Vast deposits of lithium -- a key component for electric car batteries -- are found around the western town of Loznica, where the Anglo-Australian company had bought up land and was awaiting a final green light from the state to begin mining.

The company had intended to invest $2.4 billion (2.12 billion euros) in the project.

The mining giant said late Thursday it was "extremely concerned" by the prime minister's statement.

"Rio Tinto is reviewing the legal basis of this decision and the implications for our activities and our people in Serbia," the company said in a statement.

Earlier this week, Brnabic said the government was prepared to "fight against" any potential lawsuit from Rio Tinto linked to their cancellation of the project.

Critics of the project, however, accused Vucic's government of paving the way for illegal land appropriations and brushing aside environmental concerns.

On Thursday, the premier added that Serbian officials had "never signed contracts" with Rio Tinto.

Following Thursday’s announcement, activists called on opponents of the mine to double down until the government banned future lithium and borate mining projects in the country

The hunt for lithium has set off a "white gold rush" across the globe as major corporations, including automakers, scramble to secure sufficient supplies to meet their ambitious goals to transition to greener fuel sources and technology.

Rio Tinto has been mired in controversy in recent years. A public backlash forced the firm's chief executive and several senior officials to resign last year after the company destroyed a sacred indigenous site in Australia in 2020.

Critics of the mine also highlighted the Vucic government's poor record with regulating its industrial sector, saying the administration has shrouded many projects backed international investors in secrecy.