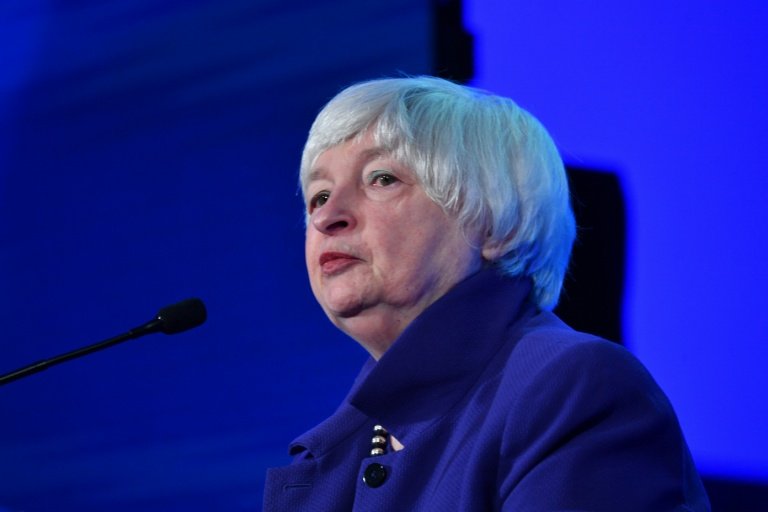 The US economic recovery will endure the setback caused by the Omicron variant, Treasury Secretary Janet Yellen said in Washington on January 19, 2022 / © AFP

The latest coronavirus variant will weigh on US economic growth in the months ahead but will not derail it, Treasury Secretary Janet Yellen assured the nation's mayors Wednesday as they gathered in Washington.

"Yes, Omicron has presented a challenge and will likely impact some of the data in the coming months, but I am confident it will not derail what has been one of the strongest periods of economic growth in a century," Yellen said.

"None of this was guaranteed. I think it's important we recognize that," she added in her appearance before the US Conference of Mayors.

"There's a very real counterfactual where Omicron did derail our recovery; a scenario where the new variant hurdled our economy backwards towards its state on Inauguration Day 2021" when Joe Biden assumed the presidency.

The Omicron variant has led to a surge in infections and quarantine cases, keeping many Americans away from their jobs.

Airlines, for example, have cancelled thousands of flights since Christmas due to staff shortages.

As a result of the Covid-19 surge, growth is expected to slow in the first quarter of 2022, economists forecast.

But Yellen insisted the American Rescue Plan passed by Congress in March 2021 under the impetus of Biden, just weeks into his White House job, "acted like a vaccine for the American economy, protecting our recovery from the possibility of new variants."

"The protection wasn't complete, but it was very strong -- and it prevented communities from suffering the most severe economic effects of Omicron and Delta," she said, noting that $350 billion in emergency funding was funneled to local governments.

The first year of the pandemic "decimated government budgets" and forced mass layoffs and the collective furlough of some 1.3 million workers including teachers and health care workers deemed essential personnel, Yellen said.

But the funding allowed communities to better prepare against and battle Omicron when it began spreading, she added.