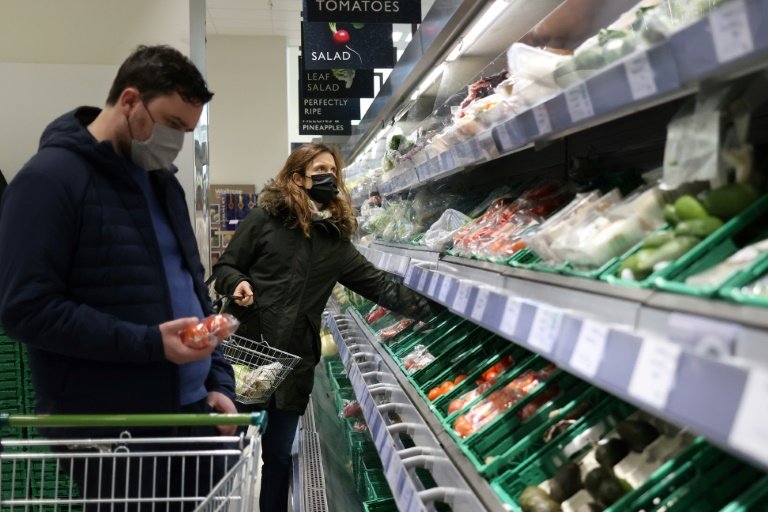 Prices for food, clothing and domestic energy rose in December in the UK / © AFP/File

The annual rate of inflation in Britain rose to a near 30-year high in December, official data showed Wednesday, stoking fears about a cost-of-living squeeze as wages fail to keep pace.

The UK's inflation rate hit 5.4 percent last month and could move even higher with domestic energy prices set to rise further, according to analysts.

Economies worldwide are battling decades-high inflation that is forcing central banks to lift interest rates, including the Bank of England which last month raised its key borrowing cost for the first time in more than three years.

The BoE, whose chief task is to keep inflation close to 2.0 percent, is now expected to raise rates again at its next meeting in February amid easing concerns over economic fallout from the Omicron coronavirus variant.

The pound on Wednesday hit a near two-year peak versus the euro on increased expectations of another rate rise, while the European Central Bank has yet to follow the BoE in tightening monetary conditions.

BoE governor Andrew Bailey, addressing a cross-party panel of MPs Wednesday, refused to be drawn on the rate outlook, but said the prospect of prolonged high energy prices was "a cause of concern".

However, the main opposition Labour Party argued that families would be rocked by "substantial" tax rises and "huge" increases in energy bills.

The cost of living in Britain is forecast to soar even higher in April owing to a tax hike and further planned increases to domestic energy bills, according to analysts.

National insurance, paid by workers and employers, is being increased to help fund social care for the elderly.

In addition, electricity and gas prices are set to rocket higher when the UK government shortly lifts a cap on energy bills amid record-breaking wholesale costs.

"With consumer prices rising at their fastest rate for three decades and wage growth slowing, Britons are being squeezed ever harder by the cost of living," said Jay Mawji, head of trading provider IX Prime.

The last time UK annual inflation was higher was in March 1992 when it had stood at 7.1 percent.

It had already reached a decade-high of 5.1 percent in November.

"The inflation rate rose again at the end of the year and has not been higher for almost 30 years," said ONS chief economist, Grant Fitzner.

At the same time, real wages in November fell on the year for the first time since mid-2020, official data showed on Tuesday.

"More pain lies ahead in the form of tax rises in April and a likely 50-percent jump in energy bills," said IX Prime's Mawji.

The BoE has in December raised its key borrowing cost to 0.25 percent from a record-low level of 0.1 percent.