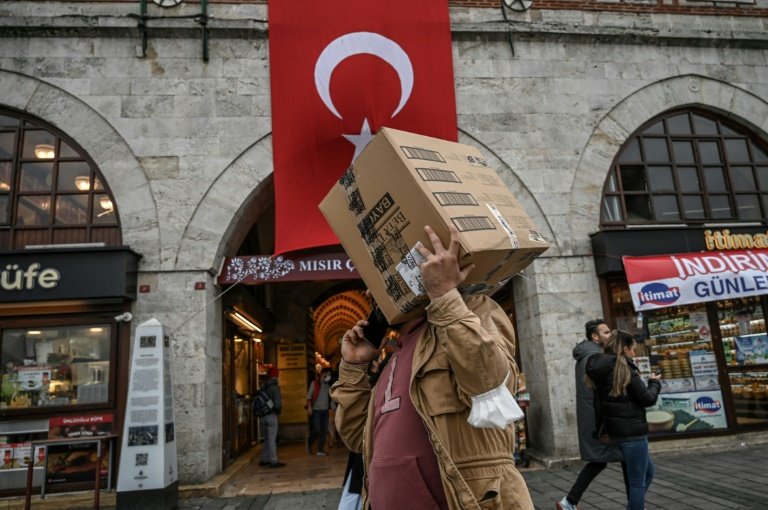 Turkish President Recep Tayyip Erdogan defended Wednesday his "risky but correct" economic policy of low interest rates as the central bank intervened in markets to prop up the falling lira.

Under pressure from Erdogan, who has sacked three governors since 2019, the central bank made a series of rate cuts since September despite double-digit inflation.

"What we are doing is right. We have made and are making a politically risky but correct plan," Erdogan told ruling party lawmakers in parliament in Ankara.

He said Turkey had moved away from a policy based on high rates and instead switched to a growth strategy based on investments, employment, production and exports.

The focus on growth is paying off as the economy recorded growth of 7.4 percent year-on-year in the third quarter of 2021, official data published on Tuesday showed.

Turkey's economy is expected to grow by nine percent this year and 3.5 percent in 2022, according to the European Bank for Reconstruction and Development.

Shortly before Erdogan's address, the central bank intervened to support the embattled lira which has lost nearly 30 percent in value against the dollar in a month.

The bank said in a statement it "started to conduct transactions at Borsa Istanbul Derivates Market (VIOP) due to unhealthy price formations in exchange rates."

The lira rallied following the announcement, gaining nearly three percent in value to reach 13.02 lira for one dollar.

It has lost over 43 percent in value against the dollar since the start of 2021.

After the 2018 currency crisis, the central bank's foreign exchange reserves -- worth $128 billion according to the opposition -- were used to support the lira.

But the Turkish leader last month hailed the bank's strong reserves, which he said had grown to $127 billion.

Before the intervention, "there was a growing chorus of concern around the imposition of capital controls," emerging markets economist Timothy Ash said in a note to clients.

Official discussions on increasing the minimum wage began on Wednesday, led by the labour minister with expectations that it could rise by 30 percent.

The issue matters since six million people in Turkey receive the minimum wage and Erdogan is keenly aware of the importance in making sure the economy is healthy and people feel comfortable ahead of elections in 2023.

Consumer prices data for November will be announced on Friday, the first set of data since the latest currency crisis. Annual inflation was 19.89 percent in October.

But he said the government "understands sincere concerns" over uncertainty driven by soaring prices and fluctuations in the currency, he said, adding that they were "carefully monitoring" the situation.

"This is our job," said Erdogan.