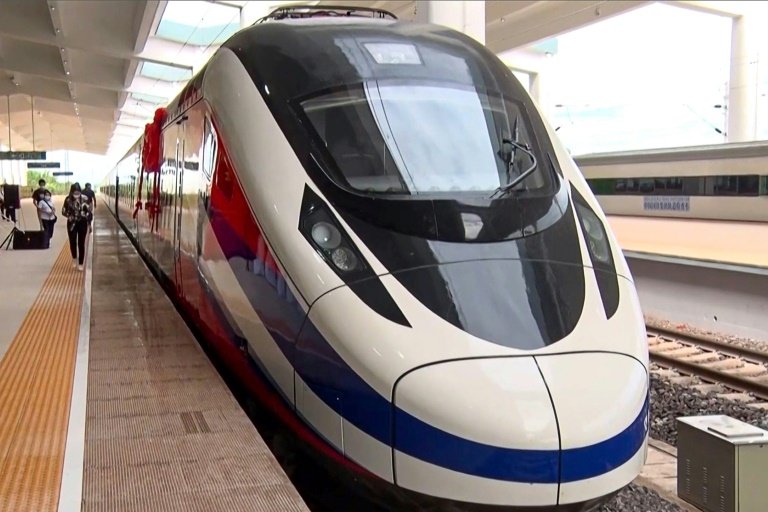 A new $6 billion Chinese-built railway line opens in Laos this week, bringing hopes of an economic boost to the reclusive nation, but experts are questioning the benefits of a project that has seen thousands of farmers evicted from their land.

Struggling strawberry farmer Anouphon Phomhacsar is hoping the new railway will get his business back on track.

His farm usually produces up to two tonnes of the red heart-shaped fruits a year, but the pandemic has hit the 2021 harvest hard.

It currently takes Phomhacsar three to four hours to send his strawberries to Vientiane by road, but he hopes the new railway will cut this delivery time in half. 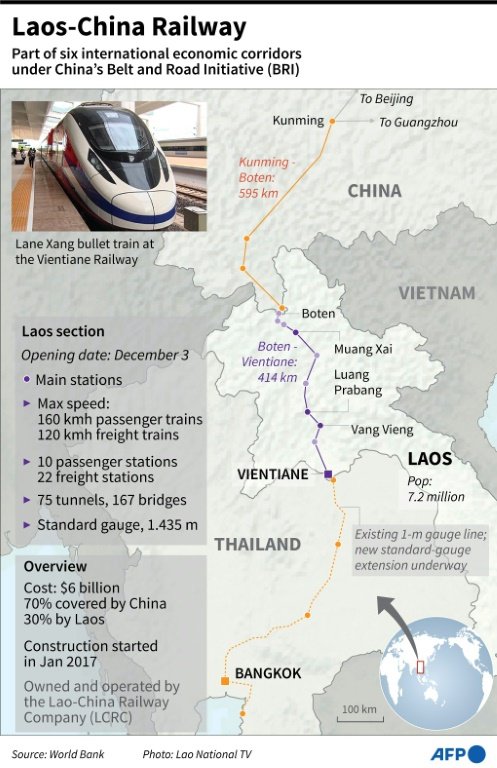 And he says it will also be easier for tourists to travel to camp under the stars and pick berries.

"In the future, foreign tourists coming to the farm could be in the tens of thousands," he told AFP.

The train route will connect the Chinese city of Kunming to the Laos capital, with grand plans for high-speed rail to ultimately snake down through Thailand and Malaysia to Singapore.

But now sleek red, blue and white bullet trains will speed along the new line at up to 160 kmh (100 mph), passing through 75 tunnels and across 167 bridges, stopping at 10 passenger stations.

Despite registering only dozens of Covid cases until April, Laos' economy took a pandemic battering -- economic growth declined to 0.4 percent in 2020, the lowest level in three decades, according to the World Bank.

Hopes for a 2021 rebound were dashed -- Laos locked down as it clocked up roughly 70,000 infections in the past eight months.

And while the railway could boost tourism, freight and agriculture, according to a World Bank report, the government needs to undertake substantial reforms, including improving border clearance processes. 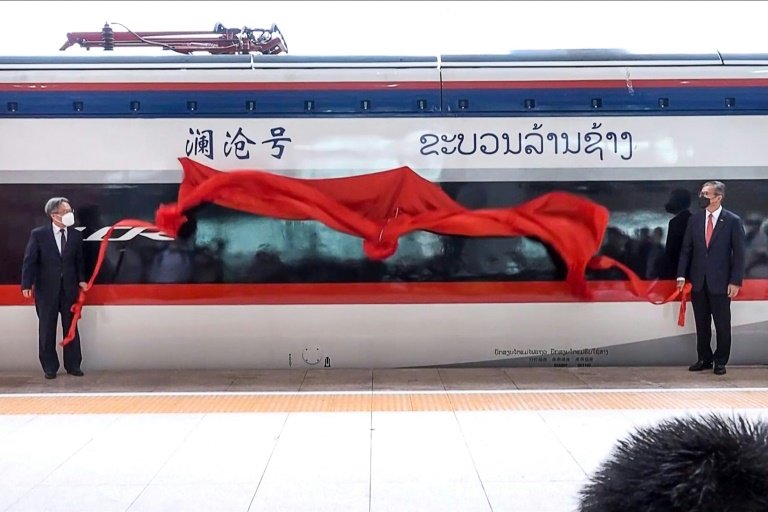 The 414-kilometre route, due to open on December 3, took five years to construct under China's trillion-dollar Belt and Road Initiative / © LAO NATIONAL TV/AFP

"The new railway is a major investment that has the potential to stimulate the Lao economy and allow the country to take advantage of its geographical position at the heart of mainland Southeast Asia," Sombath Southivong, a senior World Bank infrastructure specialist, told AFP.

The tourism industry is desperate for a pick-me-up after the pandemic caused an 80 percent downturn in international traveller numbers in 2020 -- 4.7 million foreign tourists visited the previous year.

Pre-pandemic young nomads crammed on to buses at Vientiane for the four-hour ride to adventure capital Vang Vieng -- a journey that will now take about an hour by train.

The town, which has a former CIA airstrip, was notorious for backpackers behaving badly at jungle parties before it re-branded as a eco-tourism destination. 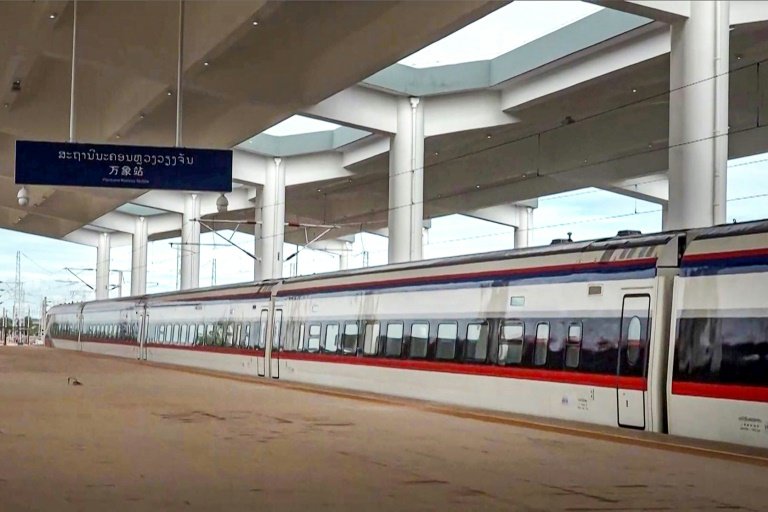 While the railway could boost tourism, freight and agriculture, according to a World Bank report, the government needs to undertake substantial reforms, including improving border clearance processes / © LAO NATIONAL TV/AFP

But the kayaks, river rafts, ziplines and hot air balloons have been empty of late.

Inthira -- a boutique hotel nestled on the banks of the Nam Song River -- shifted from a full occupancy rate to only a trickle of domestic travellers on weekends, says general manager Oscar Tality.

Tality hopes the railway and reduced travel times will give the industry a shot in the arm.

"Along the way people will see magnificent views of the mountains and will cross over bridges and tunnels. It will be a wonderful trip for those on the train," Tality told AFP.

Despite local optimism, some Laos watchers are concerned about the long-term viability of the project. 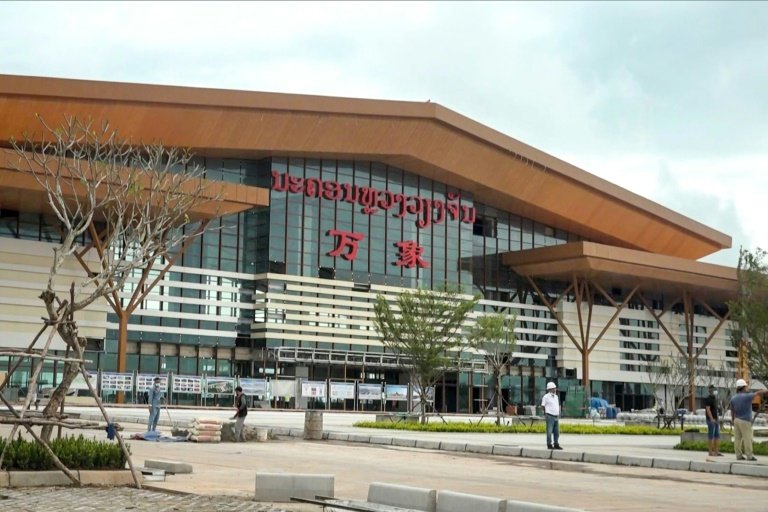 Laos' tourist industry is hoping for a boost from the railway, which will drastically cut travel times / © LAO NATIONAL TV/AFP

"The issue for Laos though is whether their economy ... their private sector is positioned to take advantage of this transport system," Australian National University lecturer Greg Raymond told AFP.

Two-thirds of Laotians live in rural villages toiling on the land, and the minimum wage is around $116 a month -- a reported $13.30 train fare from Vientiane to the border town of Boten has attracted some social media criticism for being too expensive.

"When you look at the juxtaposition of this super modern railway and the countryside it is passing through – it's very stark. One does wonder whether the Laos people will be the beneficiaries?" Raymond said.

The project has already left some 4,400 farmers and villagers reeling after they were forced to surrender land.

Many have faced long delays receiving compensation or have been paid inadequate amounts, the Lao Movement for Human Rights said in a report.

"The compensation rate is very low. If you are asking villagers to move, how can they afford new land?" Laotian MP Vilay Phommixay told parliament in June last year.

But for others it's all aboard.