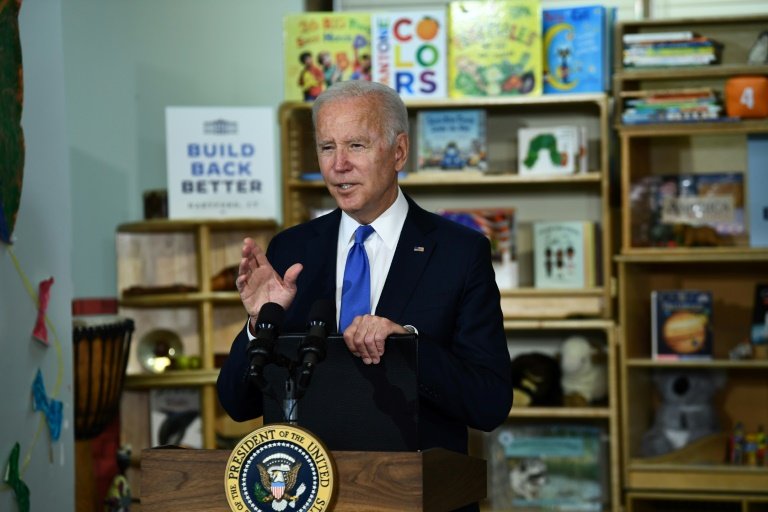 US President Joe Biden promotes his Build Back Better Agenda, highlighting the importance of investing in child care, during a speech at the Capitol Child Development Center in Hartford, Connecticut, on October 15, 2021 / © AFP

President Joe Biden made a deeply personal appeal Friday for a transformation of America's lagging child care services, saying that the crash that killed his wife and daughter demonstrated the importance of helping parents struggling with work and raising families.

Biden, who became a single parent juggling a political career and two young boys after the accident in 1972, said during a speech in Connecticut that he "could not afford the child care" on a senator's salary, forcing him to commute daily between Washington and Delaware.

"It made me realize how difficult it is for the vast majority of people who need help," Biden said at child care center in the state capital Hartford.

Part of a national tour to drum up support for his proposals, Biden's second presidential visit to the Constitution State came during a crucial phase for his historic but controversial spending plans, which face opposition from his own side as well as from Republicans.

It is far from the first time he has spoken publicly about the crash that killed his wife Neilia and their one-year-old daughter Naomi.

But the president reframed the horrific episode as a learning moment that made him realize most Americans don't have the help of an extended family that he benefited from when they are struggling to raise families.

"I've been conscious of the concern in a lack of access, and a lack of financial ability to have child care, for a long time," he said.

Child care is being held up as critical to the economic recovery from the Covid-19 pandemic -- but the administration argues that the United States invests far less in children than comparable economies.

The Organisation for Economic Co-operation and Development says the nation invests less in early childhood education and care relative to the size of the economy than all but two of the world's 37 leading developed countries. 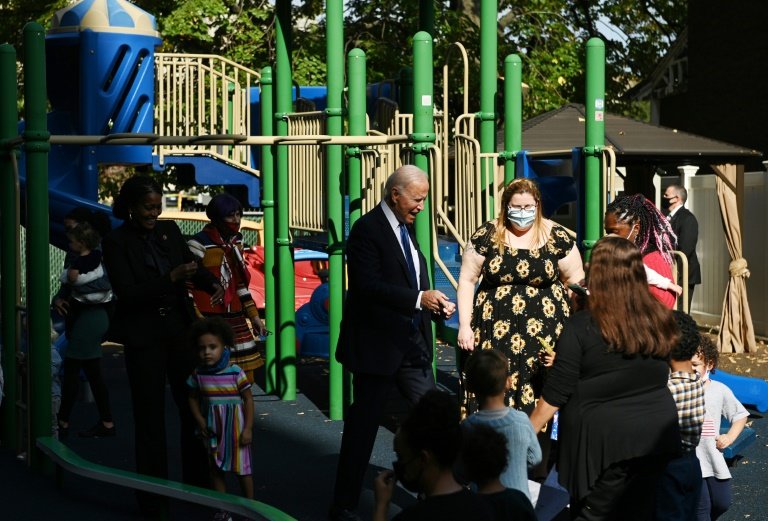 The cost of child care for the average family in Connecticut is $16,000, according to Hartford's Democratic mayor Luke Bronin, who called the Biden child care agenda "a game changer."

"How can we compete in the world if millions of American parents, especially moms, can't be part of the workforce because they can't afford the cost of childcare?" Biden said.

Parents' difficulties in hanging on to jobs also contributes to a wide gender gap in workforce participation between mothers, who still take on the greater burden of care, and fathers.

Biden is proposing to bridge the gap with federal subsidies for low and middle-income Americans that would cap families' child care expenses at seven percent of their income.

He wants to offer large subsidies to child care centers, raise wages for those who work in the industry and increase child credit from $2,000 to $3,000 a year for children aged over six.

"It's never a good bet to bet against the American people. It's time for us to invest in ourselves, show the world that American democracy works," Biden said.

"We've always led the world not by the example of our physical power, but by the power of our example. That's why the world has followed."

The Democrats in Congress have enough lawmakers without Republican help to pass the historic blueprint -- which includes improved benefits for college students and seniors, cash for health care coverage and provisions to help rescue a warming planet.

But House of Representatives liberals balk at cutting the $3.5 trillion top line to $1.5 trillion over 10 years, which a small group of moderates favor.

Biden has told progressives that the end goal should be around $2 trillion as he tries to wrangle sufficient Democratic votes.

This means confronting grueling choices between funding fewer programs for longer periods of time or more programs for shorter stints, in hopes they will be renewed by future Congresses.

Polling shows that as little as one in 10 Americans known specifics about the contents of the plan but Bronin said broad improvements in child care were overwhelmingly popular among Americans.

"It would lift up families across this country, open up pathways to opportunity, make sure that we keep our middle class strong," he said.