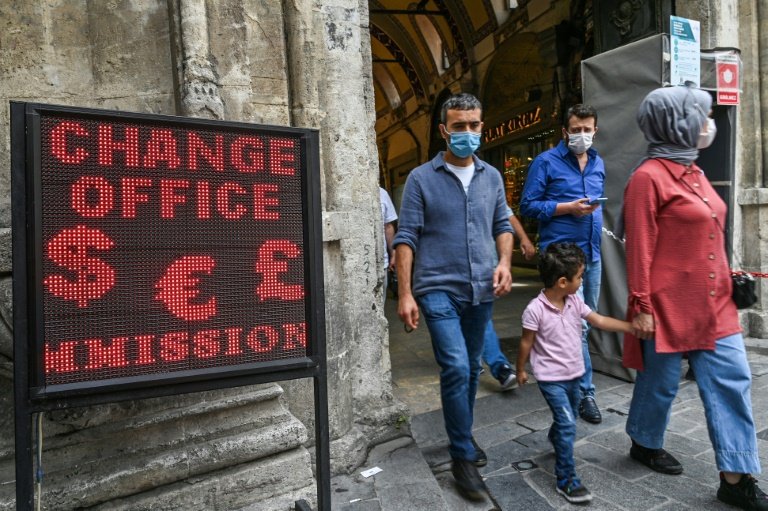 The Turkish lira sank to a record low against the dollar on Thursday after President Recep Tayyip Erdogan fired three central bank members in an overnight decree.

The embattled Turkish currency has lost nearly a fifth of its value so far this year as market concerns over the policy-setting bank's independence hit fever pitch.

Erdogan removed two deputy governors and a member of the monetary policy committee in a directive published in the official gazette.

One of the dismissed bankers was reportedly the only one to vote against a surprise interest rate cut that sent the lira on a new downward spiral last month.

"The direction of travel is worrying and there can't be many (if any) investors left that believe the central bank of Turkey is still taking the fight against inflation seriously," analyst Jason Tuvey of Capital Economics told AFP.

The Turkish lira had a volatile trading day during which it lost about one percent of its value while touching a new historic low of 9.198 to the dollar.

Emerging market currencies are weakening across the world on expectations that the US Federal Reserve and European Central Bank will soon start raising interest rates, making their assets more attractive.

But Turkey's currency is falling faster than most others because of political concerns about Erdogan.

The lira moved past the nine to the dollar mark for the first time on Monday, when Erdogan suggested that Turkey might conduct a new military operation in Syria.

Erdogan has fired three central bank governors since 2019, undermining investor confidence and leading to losses in the value of the lira that make life more difficult for ordinary Turks.

But this push for economic expansion at all costs has seen the annual inflation rate soar to nearly 20 percent -- four times higher than the government's official target.

Current central bank governor Sahap Kavcioglu had resisted lowering interest rates during his first five months in the job, leading to speculation that he was about to be dismissed.

The bank surprised most Turkish economic analysts by lowering the one-week repo rate to 18 percent from 19 percent on September 23.

"The odds of another rate cut at the next meeting on October 21 have now increased even as lira weakness accelerates," currency economist Lee Hardman of Japan's MUFG financial group wrote in a reasearch note.