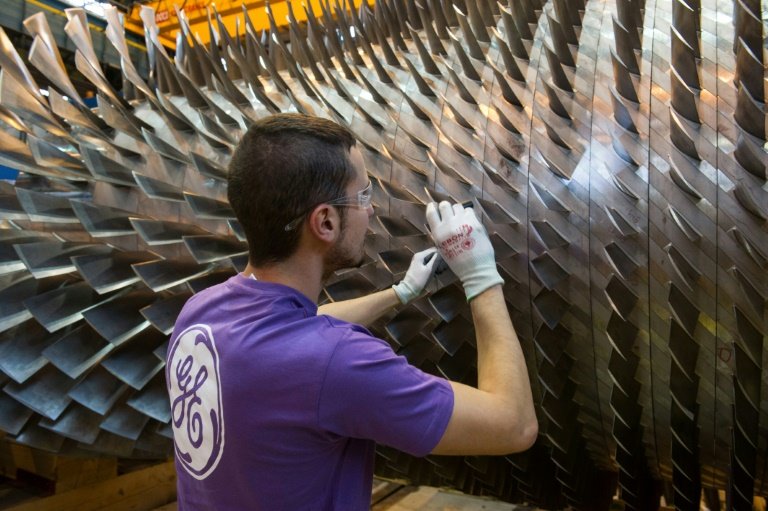 At work on a GE turbine in Belfort, eastern France. / © AFP/File

French electricity giant EDF is in talks with General Electric to buy its steam turbine business for nuclear plants, the companies confirmed Wednesday, the latest move by the American conglomerate to streamline its operations and cut debt.

The discussions had recently been reported in the press on both sides of the Atlantic, and both firms told AFP there was no guarantee they would lead to a deal.

"EDF is studying the conditions in which EDF's interests could be maintained," a spokesman said.

GE has been shedding assets for several years in a bid to focus on its energy production businesses as well as healthcare and aircraft engines.

It is now looking to sell the nuclear division of its Steam Power unit, which is separate from its nuclear fuel and reactor businesses, in order to focus on turbines fuelled by natural gas or coal.

GE acquired the business in 2014 from France's Alstom, which developed the widely used Arabelle turbines that equip nuclear power plants including the next-generation EPR reactors.

But since then GE has shed thousands of jobs in France and elsewhere, and GE Steam Power recently announced plans to cut 144 French jobs.

The potential purchase by EDF got a cautious welcome in Belfort, an industrial bastion in eastern France that is home to the bulk of the business's sites.

"I'll be paying very close attention to the details, so that it's sufficient to ensure continued operations and jobs for Belfort," he said.