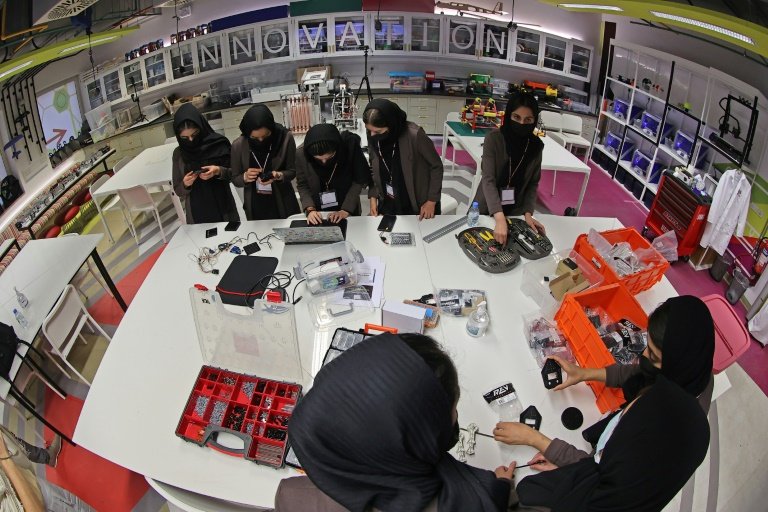 Members of an all-girl Afghan robotics team assemble components for a circuit board they are building, at the laboratory of Qatar's Texas A&M university in the capital Doha / © AFP

The nine members of an all-girl Afghan robotics team evacuated from Kabul to Qatar have built on their star status and captured hearts since fleeing their homeland.

Now back in education and working on their entries for a global robotics competition, the girls worry about their immediate future but hope they can one day return to Afghanistan.

Team member Ayda Haydarpour, 17, who switched onto digital engineering playing Super Mario as a child, said it was "too hard" to follow events in Afghanistan but hopes to return to open the first STEM (science, technology, engineering, and mathematics) school.

"My grandfather used to ask me lots of questions about his tablet and phone," she said with a smile.

"In Afghanistan, robotics is new, especially for women," said Haydarpour, who has three sisters back in Afghanistan.

Her mother had worked as a teacher at a girls' high school, but the facility is yet to reopen following last month's fall of the government to the Taliban.

The Taliban had banned women from work and education, confining them to homes during their brutal rule of Afghanistan between 1996 and 2001.

On Tuesday, the Taliban vowed girls would be allowed to return to school although they have so far been effectively excluded, with a spokesman saying "more time is needed".

While Haydarpour dreams of one day working for tech giant Microsoft, she is adamant that she wants "to go back and serve my people".

In the robotics laboratory at Texas A&M, one of several US universities with an outpost in Qatar, Haydarpour hunched over a laptop decorated with colourful badges while her teammates assembled components.

The girls evacuated to Qatar were placed in one of three institutions depending on their needs with full scholarships granted by Doha.

Some of their teammates remain in Afghanistan while others are in Mexico and the UAE.

But the nine girls in Qatar all get together after school to work on their entries for the First Global Challenge robotics competition. 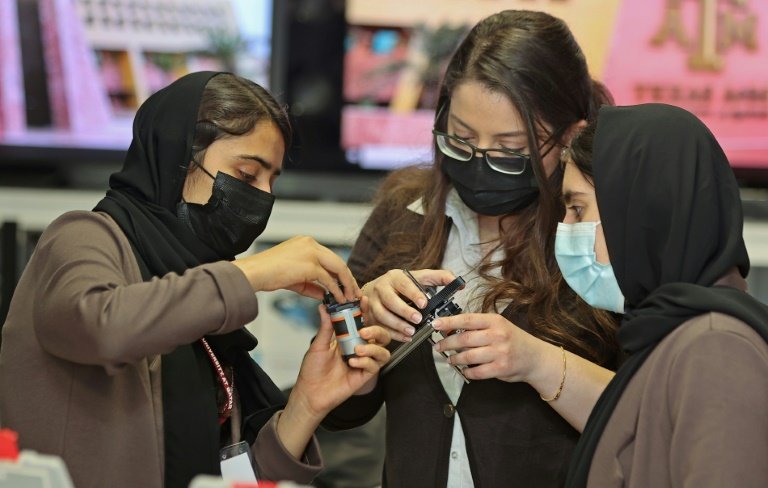 Asked how their second day of school had gone, following their arduous departure from Afghanistan on a Qatari military plane and 10 days quarantine amid the coronavirus pandemic, the girls chimed back "all good" in chorus.

Eight of the girls had a spirited exchange about a faulty component on a circuit board they were building to use on a CubeSat weather station.

"For one week we couldn't fix it -- so we changed the wire," said Haydarpour, holding up a printed circuit board trailing cables onto a lab bench dotted with toolboxes.

Beside her, another member of the team assembled the plastic housing for the weather station while periodically checking her phone.

On the other side of the table, half of the girls worked to build a robot capable of scooping up plastic balls and firing them away.

"It's for the shooter for the balls," said 18-year-old Somaya Faroqi, the team leader, as she and her teammate Florans conferred on how to fix a motor.

She had earlier told AFP that she was "so sad because we lost our family, our (robotics) coaches, our life" by abruptly leaving Afghanistan.

Roya Mahboob, founder of an Afghan software company, helped form the team which went on to develop a low-cost ventilator last year at the height of the pandemic. 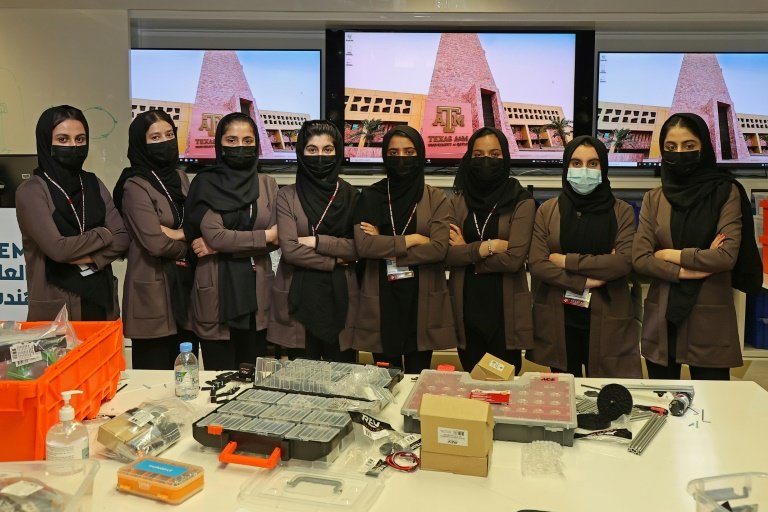 Now back in education and working on their entries for a global robotics competition, the girls worry about their uncertain present but hope they can one day return to Afghanistan / © AFP

The girls made headlines in 2017 after being denied visas to take part in a robotics competition in Washington -- before then-president Donald Trump intervened and they were allowed to travel.

The same year the girls won a prestigious robotics award.

US Secretary of State Antony Blinken dropped in on the girls during a visit to Qatar earlier this month.

"I was honored to meet several remarkable women & girls of the Afghan Robotics Team. Their journeys & STEM aspirations are inspiring," he tweeted.

Benjamin Cieslinski, a laboratory manager at the university, called the girls' skills "a really high level" despite their ordeal.

But Haydarpour still worries about the future and education of girls in her country.

"What will happen in Afghanistan?" she asks. "It's too hard to see your country in that situation."