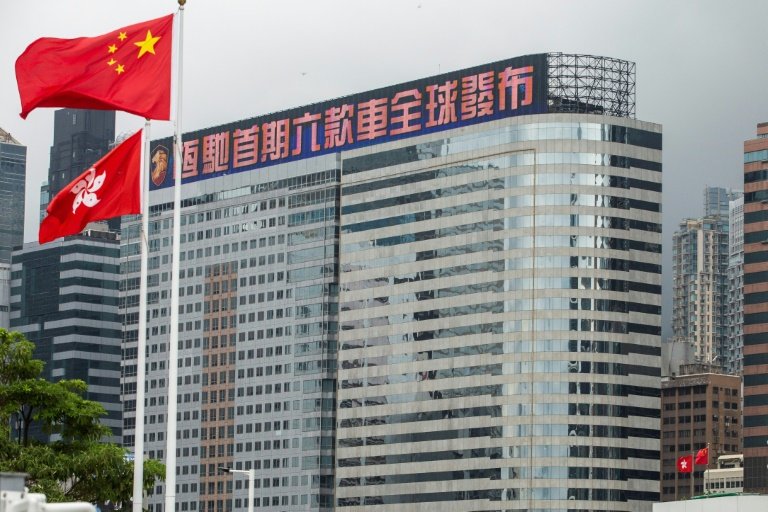 China Evergrande is trying to offload assets to raise cash, with reports saying it is willing to take a loss on the sale of its Hong Kong headquarters / © AFP

Chinese housing giant Evergrande is one of the country's largest and most indebted private conglomerates, teetering on the brink of bankruptcy after years of rapid growth and a buying spree.

Chinese housing giant Evergrande is one of the country's largest and most indebted private conglomerates, teetering on the brink of bankruptcy after years of rapid growth and a buying spree.

Crippled with debt, the firm's Hong Kong-listed shares have collapsed this year on mounting fears for its financial health.

Any possible bankruptcy of the group -- which claims to employ 200,000 people and indirectly generate 3.8 million jobs in China -- would have major repercussions on the country's economy, and possibly the world.

Here's what we know about Evergrande.

With a presence in more than 280 cities, Evergrande is one of the largest private companies in China and one of its leading real estate developers.

The firm made its wealth over decades of rapid property development and wealth accumulation as China's reforms opened up the economy.

Its president, Xu Jiayin, was ranked as the fifth richest person in the country in a recent wealth report from Hurun.

What does it do?

While predominantly a real estate firm, in recent years the group has embarked on an all-out diversification.

Outside of property development, it is now best known in China for its football club Guangzhou FC, formerly Guangzhou Evergrande.

The group is also present in the flourishing mineral water and food market, with its Evergrande Spring brand. It has also built children's amusement parks, which it boasted were "bigger" than rival Disney's.

Some investments have been more successful than others. It's Evergrande Auto electric car, founded in 2019, is not currently marketing any vehicles at all.

What are the problems?

Evergrande has increased acquisitions in recent years, taking advantage of the frenzy in real estate.

The group said this week its total liabilities had swelled to 1.97 trillion yuan ($305 billion) and warned of "risks of defaults on borrowings".

In August the rating agency Moody's -- worried about the repayment capacity -- lowered its strength rating to "negative", while Fitch and Standard & Poor's have since done the same.

Evergrande shares have lost more than 70 percent of their value in one year, and some contractors and suppliers have complained about not being paid on time.

Bloomberg News reported Friday that some creditors of the heavily indebted giant are demanding immediate payback of loans.

Last year, a leaked letter from Xu apparently asked for permission from regulators to restructure prompted market panic -- although Evergrande later said it was a fake.

However, the ensuing unrest led the group and its investors to agree to the repayment of some 130 billion yuan of debt.

The Shenzhen-based group has been dubbed a "grey rhino" by Beijing -- a large company with alarming debt that presents a systemic financial risk.

In recent years, the authorities have been pushing similar companies to slim down, including real estate giant Wanda and tourism conglomerate Fosun.

Real estate is one of the engines of the Chinese economy, and the sector has played a key role in the post-pandemic recovery.

Any bankruptcy would have major repercussions on the world's number-two economy.

The debt-laden developer reported a drop in first-half profit in late August, as net income fell 29 percent from a year earlier to 10.5 billion yuan, following an earlier profit warning.

Company bosses will now have to try to reduce its debt while keeping up profitability, as Beijing tightens the conditions of access to credit for real estate developers.

It has undergone an asset sale, including offloading stakes in holdings such as a Hong Kong-listed internet business, a regional bank and an onshore property firm. Meanwhile, Bloomberg News and local media have reported that it is mulling the sale of its Hong Kong headquarters and a large land parcel in the city at a loss.

Meanwhile, under new rules, Evergrande can no longer sell any property until it has formally finished building it -- ending a practice of pre-sales that the group has largely used to finance itself and keep its activities afloat.

However, analysts believe that regardless of the group's troubles, there is a slim chance that Beijing would allow such a behemoth to go to the wall-- instead pushing it to drive down debt and applying pressure for it to reduce its exposure.

Beijing "will not let Evergrande go bankrupt", say analysts at US-based SinoInsider, believing it would have "a huge impact on the regime" and its stability.