England lifts virtually all of its coronavirus restrictions, setting it at odds with the three other nations of the United Kingdom and sparking concern among scientists. / © AFP

Thirsty punters, spendthrift shoppers and jubilant clubbers toasted England's "freedom day" easing of Covid restrictions on Monday, even as many others saw little to celebrate.

The end to limits on social mixing came as a relief to the hospitality, retail and events industries after more than a year of meagre takings.

The government says a mass vaccination campaign justifies the move, but a resurgence in virus cases has prompted widespread concern among scientists both at home and abroad.

Nightclubs had been shut since March 2020, and many reopened at the stroke of midnight. For those filling Bar Fibre in the northern city of Leeds in the early hours, the experience was exhilarating.

"This is a special moment, this is freedom," the DJ announced as revellers took to the dance floor and the club sprayed showers of confetti.

"People are treating it like a special occasion, a New Year's Eve type of affair. Freedom Eve is what we're calling it," said Bar Fibre owner Terry George, dressed in a black sequinned tuxedo.

George handed out single-use masks on the dance floor, but wearing a face covering in enclosed spaces is no longer a legal requirement in England, and there were few takers.

A beaming Lorna Feeley, 44, said she was "absolutely ecstatic" to be going out again. "That is my life, my soul, I love dancing."

Peter Marks, chief executive of Rekom, which operates 42 late-night bars and clubs, told Sky News that clubs do not deserve their reputation as potentially "super-spreader" settings. 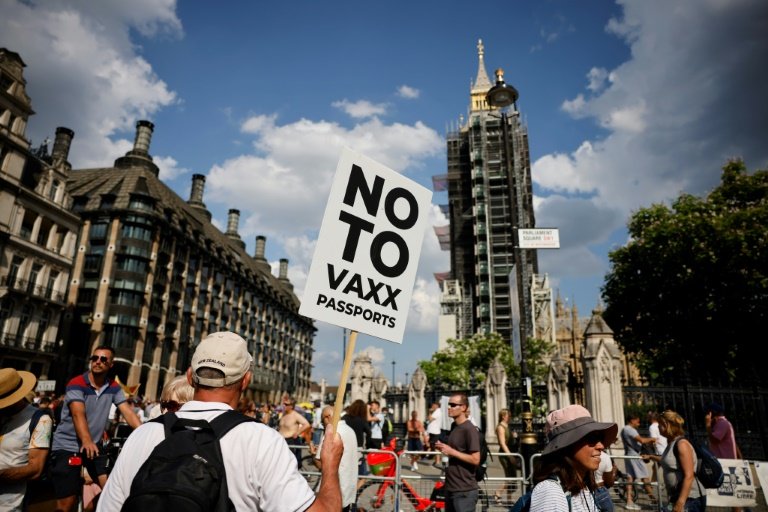 Anti-vaccination protesters gather outside the Houses of Parliament as coronavirus restrictions are lifted in England. But scientists expressed deep concern as infections. Britain will administer vaccines to clinically vulnerable youngsters. / © AFP

He argued that clubs have "amazing ventilation", due to the fact that previously people smoked inside and shows included pyrotechnics.

But researchers for a government pilot programme of test events found that two indoor dance nights in Liverpool, with more than 3,000 attending in April and May, did have poor ventilation.

There were sustained higher levels of carbon dioxide from dancers' breathing by the stage, their report said, calling this a "cause for concern".

However, there was also only a handful of Covid infections registered after the test events.

Pubs reopened months ago, but only for table service, and many in city centres have struggled for custom given the government's mandate for employees to work from home where possible.

Now, people can mingle at the bar, and the homeworking mandate is gone.

"The footfall has fallen -- on a regular midweek day we're struggling with not having many customers around," said Liam Dugglevy, 28, assistant manager at The Viaduct Tavern in London.

"When the office staff come back, that is when we'll see a big uptick," he said.

But many are apprehensive at the changes, and the government's decision henceforth only to recommend that people wear face masks has been widely panned. A customer buys a pint in a pub in central London as coronavirus restrictions are lifted. / © AFP

Operators of London's sprawling public transport network insist that passengers will still need to wear masks, and the devolved governments in Scotland and Wales are maintaining the mandate.

Hannah Mordi, 34, was out enjoying some retail therapy in central London, and drew some reproving looks for not wearing a mask in shops.

"I'm trying not to focus on that and just enjoy being out with my mum and having a bit more freedom," she told AFP.

"It does feel exciting, but it's tainted a little bit because (infection) numbers are going up -- there's an overhang of doom and gloom."

Gym manager Harry Wood, 27, added: "It doesn't feel like real freedom -- it's more like a pause. It wouldn't surprise me if we're going back to lockdown after summer."

Sipping a pint of beer outside The Sugar Loaf pub in London, pensioner Chris Doyle did not contemplate radical changes to his behaviour in response to Prime Minister Boris Johnson's new direction.

"Freedom day feels like a bit of sloganeering from Boris. I'm not going to pile into places where I don't feel comfortable," the 63-year-old said.