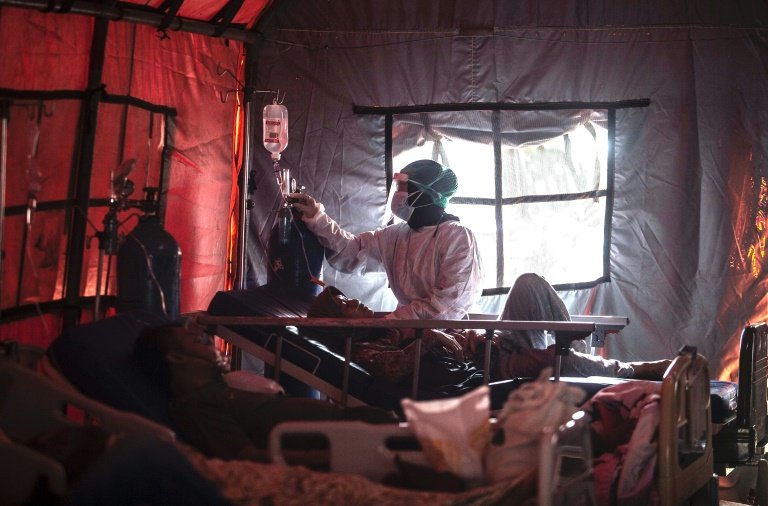 Russia's Covid-19 death toll hit a new record Wednesday as the country battles the highly infectious Delta variant, while Europe geared up for the launch of an EU-wide Covid certificate to boost its devastated tourism industry.

Russia's Covid-19 death toll reached a record on Wednesday as the country battled the highly infectious Delta variant, even as Europe prepared to launch an EU-wide Covid certificate to boost its devastated tourism industry.

Delta, the most contagious coronavirus variant to date, is fuelling concerns over new waves of the coronavirus pandemic, which has already claimed nearly four million lives worldwide.

Russia reported 669 Covid deaths in the past 24 hours -- a high for the second day in a row, government figures showed. 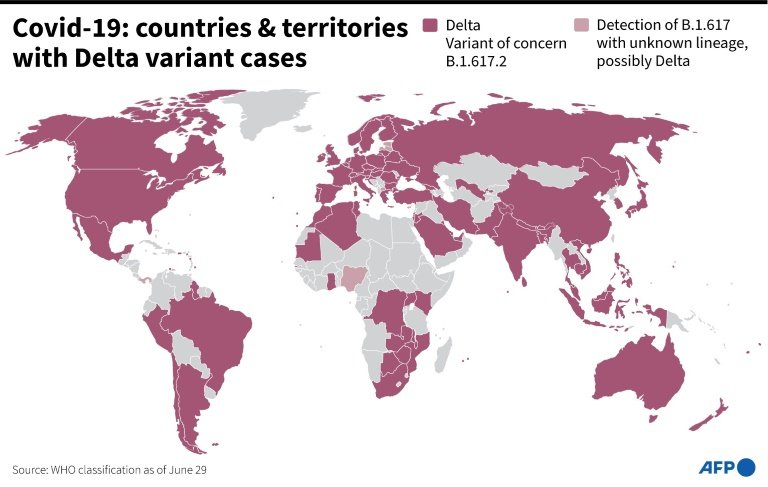 The Delta variant around the world / © AFP

Those figures came two days ahead Friday's Euro 2020 quarter-final in Saint Petersburg in front of 26,000 spectators, many of them foreigners flying in for the match.

President Vladimir Putin, while he had not called for mandatory vaccinations, on Wednesday urged Russians to get the shot. So far, only 15 percent of the population has chosen get the free jabs, even though they have been available since December.

"It is necessary to listen, not to people who understand little about this and spread rumours, but to specialists," said Putin.

The Delta variant is fuelling multiple outbreaks in Australia, a country that had largely escaped the mass infections seen elsewhere. Alice Springs on Wednesday followed Sydney, Brisbane, Perth and other cities into lockdown. 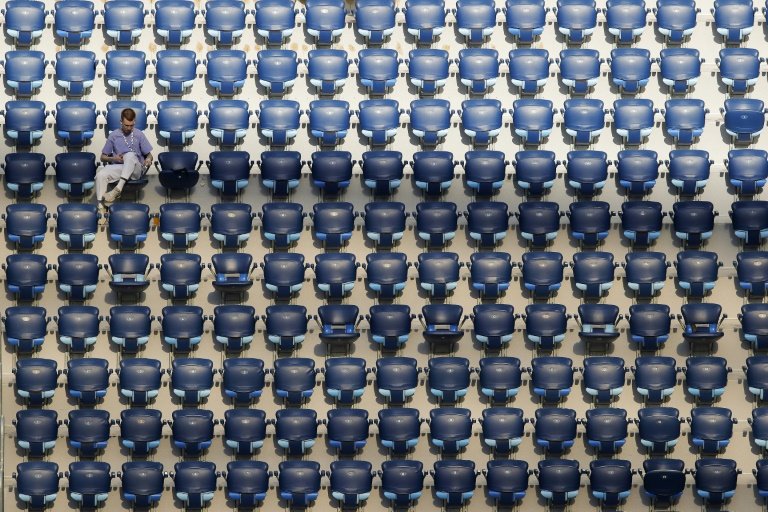 Saint Petersburg is set to host some 26,000 fans for a Euro 2020 quarter-final on Friday, despite worries over the pandemic / © POOL/AFP

There is mounting anger among Australians over the country's slow vaccine rollout, with only about five percent having received it so far. Until now, the authorities have relied heavily on border closures and strict quarantines to curb the spread of the virus.

"It is disgraceful that the situation in Australia has essentially not changed in the last year," locked-down Perth resident Robert Binczyk told AFP.

Cases of the Delta variant, which was first detected in India, have been reported in at least 96 territories, according to the World Health Organization (WHO), which has called on countries to redouble vaccination efforts.

Just over one percent of Africa's population was fully vaccinated as of last week, the WHO has said. But their appeals to be bearing fruit Wednesday.

International donors pledged over $700 million to South African pharmaceutical giant Aspen to boost production of Covid-19 vaccines and treatment on the under-vaccinated continent.

And the World Bank announced it had boosted its vaccine fund for developing countries by $8 billion to $20 billion. 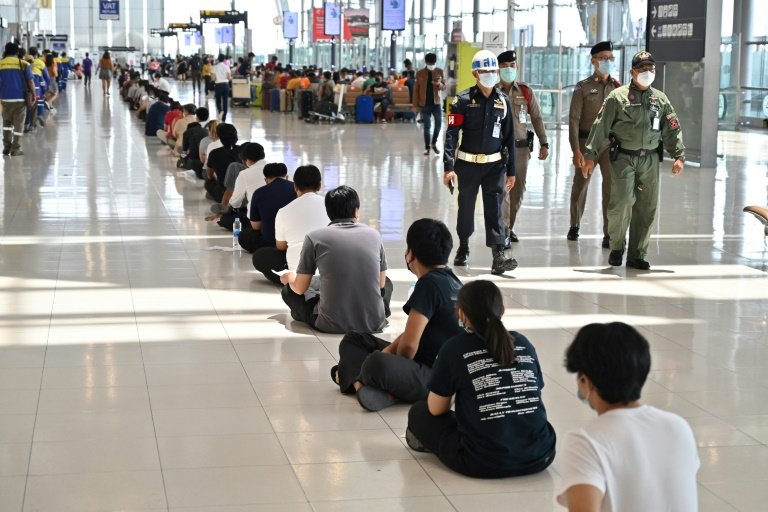 Although Delta is soon expected to become the dominant variant in Europe, European Union leaders are banking on mass vaccinations to protect their populations from the death tolls seen in earlier waves of the pandemic.

France on Wednesday ended most of its capacity limits on restaurants, cinemas, stores and other public venues, despite warnings of a likely fourth wave of cases in the autumn.

American tourists armed with vaccination certificates are now starting to return to Paris, to the relief of the hospitality sector.

"It's just a rush of culture and we really missed it," said Padmini Pyapali, enjoying a drink outside a cafe on a tour of France and Greece with five friends. 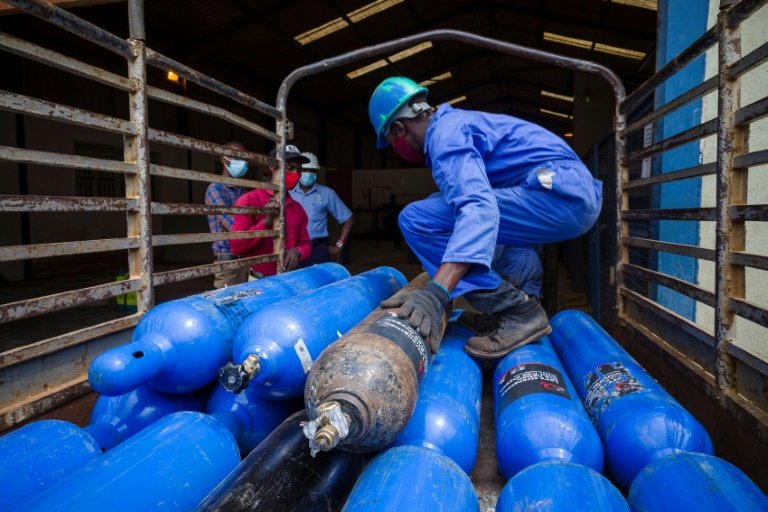 Hit by third wave of Covid, Uganda is in need of more oxygen / © AFP

In Asia, Thailand is also preparing to reopen the holiday hotspot of Phuket to vaccinated travellers, even as the country registered 53 Covid deaths Wednesday -- its highest single-day death toll.

Globally, the economic impact from the plunge in tourism during the pandemic could top $4 trillion, according to a new UN report.

Health authorities in Portugal, where tourism accounted for around 15% of GDP, reported over 2,000 new cases of coronavirus in 24 hours Wednesday, driven by the Delta variant.

And in a stark reminder of the continuing threat from other variants of concern, Spain is struggling to contain an outbreak of the Alpha strain.

It is a spike in Delta and not Alpha in Britain that led authorities there to caution football fans from flying to Rome to support the England football team in Saturday's quarter final.

Supporters who have tickets to the match against Switzerland would face five days of quarantine and therefore miss the game.

North Korea is one of the five countries in the world that has yet to start immunising people against Covid-19, along with Burundi, Eritrea, Haiti and Tanzania.