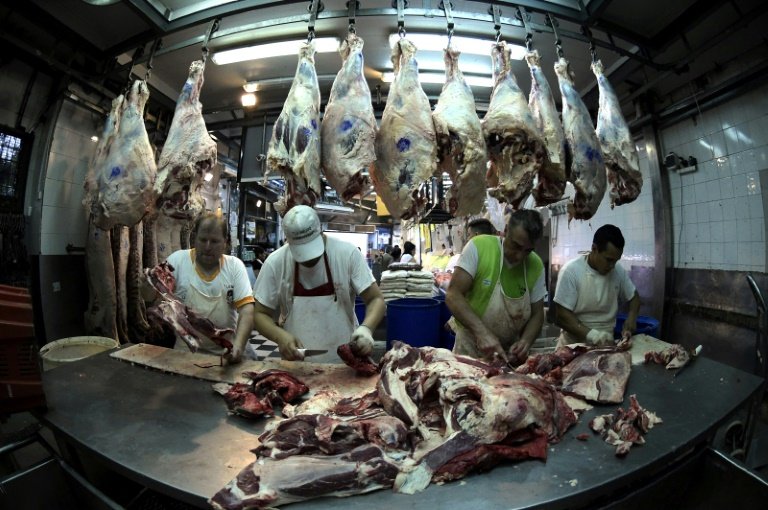 Argentina, one of the world's biggest beef exporters, has suspended foreign sales of the meat for 30 days to combat price increases at home, the government said Monday.

Argentines ate 38 kilograms (84 pounds) of beef and veal per head in 2019, according to figures from the Organisation for Economic Cooperation and Development -- about 12 kilograms per head more than the second-placed United States.

But they also face one of the most elevated consumer price indexes in the world. Inflation hit 4.1 percent in April, according to state statistics agency Indec, and the cost of living has increased 46.3 percent in the last 12 months.

"As a consequence of the sustained increase of the price of beef on the domestic market, the government decided to implement a set of measures aimed at regulating the sector," a statement from center-left President Alberto Fernandez said.

"During the implementation of these measures, beef exports are limited for 30 days."

Exceptions will be allowed for foreign exports already in progress.

In an interview Sunday evening, Fernandez said he was concerned about the increase in prices, especially of food.

"It worries me a lot, because it is inexplicable, there is really no reason, other than the increase in consumption, to explain the increases that we saw in March and April," he told news channel C5N.

Agricultural exports make up most foreign spending in the country.

Beef industry groups pushed back against the plan.

"The damage caused by the measure will decrease the supply of meat, making prices rise as has happened in the past."

"The closure of meat exports is an error," the organization posted. "A step back for the development and growth of ranching. We are on our way to a trading halt."

Recent sustained inflation reinforces the concern that it will be difficult for the government to cap this year's total inflation at 29 percent, which is the target that has been laid out in budget legislation.

In an effort to fight the effects of a long coronavirus lockdown, the government launched an economic aid program that included large monetary payouts.

Argentina is navigating its third year of recession, worsened by the Covid-19 pandemic which led to a 9.9 percent drop in GDP in 2020.