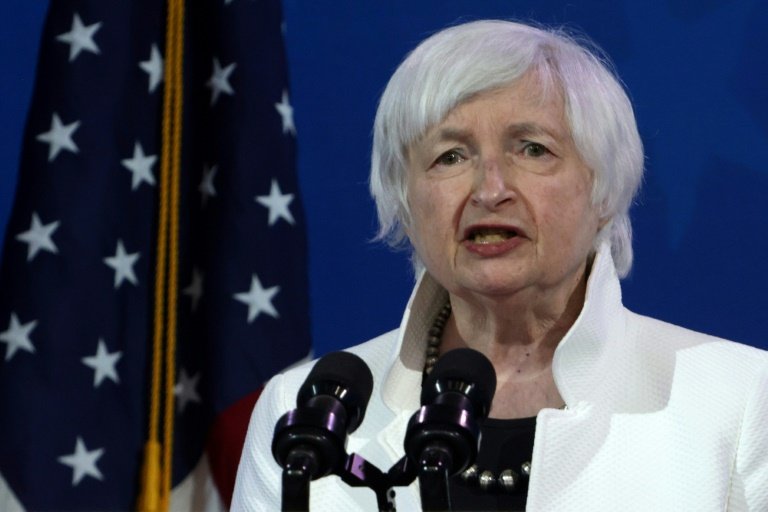 US interest rates may have to increase "somewhat" to keep a lid on inflation if President Joe Biden's latest spending proposals are enacted and the economy heats up, Treasury Secretary Janet Yellen said Tuesday.

But after her comments set off a mini-firestorm and sent stock prices tumbling, Yellen later clarified that she was not predicting nor suggesting the Federal Reserve should raise rates.

After winning approval for a $1.9 trillion pandemic rescue plan in March, Biden has made two more proposals totaling nearly $4 trillion over a decade and partially paid for with tax increases on corporations and the wealthy.

The goal is to revamp the US economy after the Covid-19 pandemic caused a severe downturn in 2020.

"It may be that interest rates will have to rise somewhat to make sure that our economy doesn't overheat," Yellen said in a pre-recorded conversation with The Atlantic.

However, she said "the additional spending is relatively small relative to the size of the economy" and is over a larger time frame than the pandemic rescue spending, which focused on immediate needs of workers and families.

Though Yellen acknowledged the higher growth "could cause some very modest increases in interest rates," the United States needs the investments "to be competitive and to be productive."

The Federal Reserve has pledged to keep interest rates near zero until employment recovers and inflation holds above its two-percent target level for some time, but economists and investors are increasingly sounding the warning that government spending will cause an inflationary spiral.

Fed Chair Jerome Powell and others have tried to tamp down those concerns, saying price increases in the short term are due to the rebound from the unprecedented impact of Covid-19, as well as temporary supply issues as economic activity resumes.

Yellen, who was Powell's predecessor as Fed chair, agreed price spikes will be temporary.

"I don't think there's going to be an inflationary problem but if there is, the Fed can be counted on to address them," she said during a conference hosted by The Wall Street Journal.

She stressed that she "respects the independence of the Fed" and would not suggest a policy course.

She was upbeat about the outlook, predicting the US would return to full employment next year.

"I think the economy's going to get back on track."

In the effort to boost employment and growth in coming years, Biden has proposed the $2 trillion American Jobs Plan that would pay for renovating roads and bridges while also funding green technology, expanding broadband internet access and fixing household water supplies.

And his latest proposal is the $1.8 trillion American Families Plan, which would pour money into childcare, early education and colleges and universities.

In response to questions about the massive spending, Yellen said it is important that government "deficits stay small and manageable," which is why the White House has proposed some tax hikes to pay for the investments, as well as tightening up on tax collection by closing loopholes.

"It's really shocking and distressing to see estimates suggesting that the gap between what we're collecting in taxes under our tax law, and what we should be collecting if everybody were paying the taxes that are due, amounts to over $7 trillion over a decade," she said.

"We're trying to make meaningful steps to close that gap."