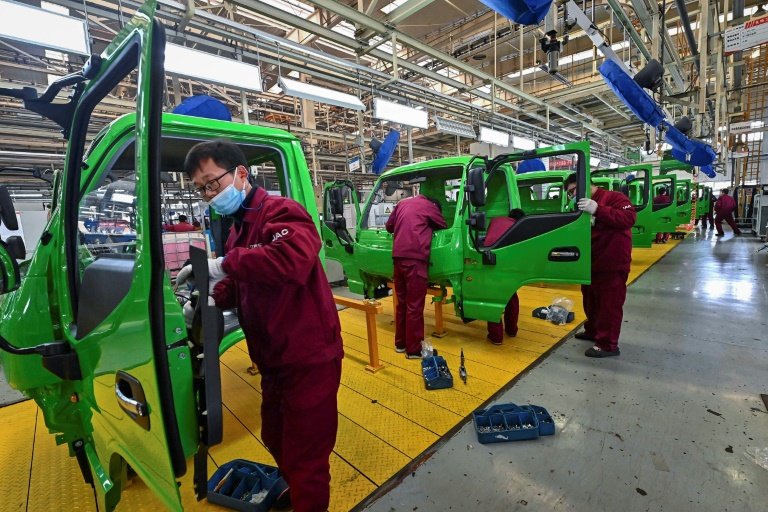 The Chinese economy expanded at a record pace in the first quarter, helped by a strong surge in consumer activity in the vast nation / © AFP/File

China saw expansion of 18.3 percent in the first quarter, boosted by a sharper-than-expected increase in retail sales.

The economic growth figure was the highest since records began three decades ago, enhanced by its chronically weak comparison figure from last year, though the reading was slightly below forecasts in an AFP survey.

The data came on the heels of strong government reports on employment and retail sales released Thursday.

"We had tremendous data all week this week," said Chris Low of FHN Financial.

"In addition to strong data, we get reassurances from Fed officials all week, including the chair, that they're very comfortable with the economic and inflation environment... so that's good news for equities, as well."

Both the Dow and S&P finished at fresh records Friday and also posted their fourth consecutive weekly gains.

"The bulls continue to call the shots and they have reason once again to like what they see and hear, as it resembles in many respects what they saw and heard yesterday," said Patrick J. O'Hare at Briefing.com.

London's benchmark FTSE 100 index climbed above 7,000 points for the first time since February 2020, or just before the coronavirus pandemic took hold worldwide.

"The FTSE's breakout above the key 7,000 level and the DAX surging to a new record high suggest investors remain convinced that the European economy will also rebound strongly in the months ahead as lockdowns ease and travel and tourism resumes," said Think Markets analyst Fawad Razaqzada.