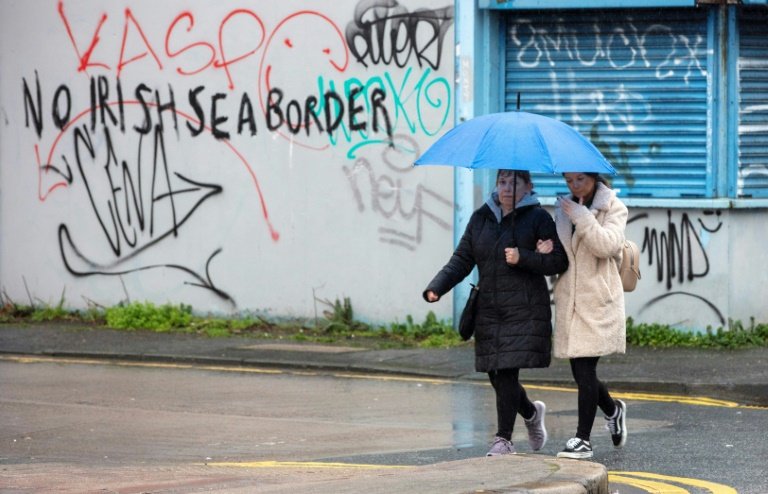 Graffiti in a loyalist area of south Belfast, Northern Ireland. The difficult Brexit transition has led pro-UK unionists to warn of tensions within their communities / © AFP

A new cross-Channel row erupted Wednesday as Britain threatened to break the terms of the Brexit withdrawal treaty by unilaterally delaying checks on food going to Northern Ireland.

The European Union warned it would respond with "legal means" to the announced move, which it said would undermine a pact meant to protect peace on the island of Ireland.

The Irish government called London's decision "unhelpful", while France said it was "unacceptable".

But the UK government, in a statement after talks between Brexit minister David Frost and EU Vice-President Maros Sefcovic, said the measures were "limited and technical".

Northern Ireland Secretary Brandon Lewis triggered the dispute by announcing that London will delay from April until October 1 a grace period under which food and farm products can flow to Northern Ireland from mainland Britain without customs inspections.

The six-month delay is necessary, it argued, "to provide more time for businesses such as supermarkets and parcel operators to adapt to and implement the new requirements in the Protocol."

Britain has chafed at the terms of the January 2020 Brexit agreement it signed, part of which keeps its territory of Northern Ireland in the EU's customs area, essentially creating a customs border down the Irish Sea.

Ahead of the Frost-Sefcovic videoconference, the EU said the announcement amounted to a "violation" of the January 2020 Brexit agreement under which Britain left the European Union.

"This is the second time that the UK government is set to breach international law," Sefcovic warned.

That referred to a previous attempt by London -- later dropped -- to override the protocol in the Withdrawal Agreement relating to Northern Ireland.

Sefcovic -- who co-chairs with Frost a joint EU-UK committee meant to work through issues related to the Brexit treaty -- stressed that the agreement aims to protect the 1998 Good Friday Agreement that brought an end to decades of sectarian violence in Northern Ireland.

"A unilateral announcement is deeply unhelpful to building the relationship of trust and partnership that is central to the implementation of the protocol," he said in a statement.

Brussels had agreed the initial grace period, which was to end in April, to allow Northern Ireland supermarkets time to work out new supply chains.

Shelves in the territory had gone bare in the first months of this year, after a post-Brexit transition period ended and Britain left the EU single market on January 1.

The disruption caused widespread confusion among businesses, with some UK suppliers refusing to ship goods across the Irish Sea.

The difficult transition has also had political ramifications, with pro-UK unionists in Northern Ireland warning of tensions within their communities over the protocol.

The European Union has signalled it could consider "flexibilities" within the Brexit treaty, but only if Britain first builds the permanent inspection facilities for goods arriving in Northern Ireland it has promised.

Northern Ireland's agriculture minister said last week construction of those facilities had been halted over concerns about the new rules.

The UK statement said Frost had argued "that such operational measures were well precedented in other international trade arrangements, and that they were entirely consistent with our intention to discharge our obligations under the Protocol in good faith.

"He and Vice President Sefcovic agreed that both parties would remain in close contact," it said.

UK Prime Minister Boris Johnson, who had hailed the Brexit treaty when he signed it, told lawmakers at weekly parliamentary questioning Wednesday that Northern Ireland's place within the UK internal market was "rock solid and guaranteed".

He spoke of "some temporary operational easings in order to protect the market in some areas, such as food supplies, pending further discussions with the EU".