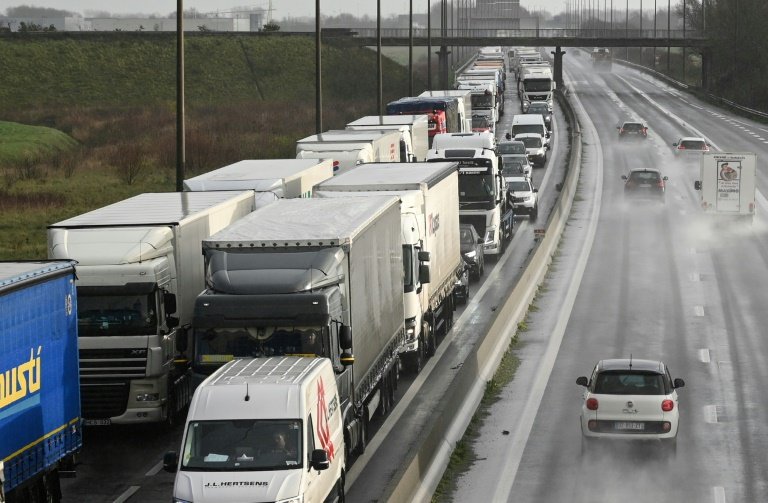 French companies must confront new procedures that have caused delays and additional costs for doing business with post-Brexit Britain, sparking concerns about an uncertain future.

"When Britain was part of the single market, delivering to a client in London was like delivering to one in Lyon," said Gary Haworth, director of Toupret, which makes fillers to repair wall cracks.

The company employs 200 people and has worked on building up its market presence in Britain in recent years.

While Britain left the EU in January last year, it stayed on in the single market for a transition period to the end of 2020.

While the post-Brexit deal that went into effect on January 1 avoids trade tariffs on most goods, customs checks have been re-established, with the resulting paperwork causing delays and added costs.

Those delays mean "we have invested more there and keep more stock in our British warehouse, because we still need to be able to deliver to clients with the same service as before," said Haworth, a British national who has spent part of his career in France.

A shipment that left Toupret's factory near Paris on January 11 arrived in Britain without problems thanks to careful preparation of customs documents.

The company had set up a team of eight people to prepare for changes stemming from Britain's withdrawal from the EU.

France Beury, who heads European and international affairs at TLF Overseas, a trade group for transport and customs facilitation firms, emphasised that companies must be prepared to now deal with Britain as a foreign country.

Although the post-Brexit trade deal was not agreed until the 11th-hour, she said its contents should not come as a surprise.

For the past year "we had an idea of the contents of the eventual accord," Beury noted.

One of the most complicated issues for companies is furnishing information for the rules of origin requirement.

In order for goods to be exempt from tariffs a certain threshold of local content must be met, which means companies must gather paperwork from their suppliers.

Beury said that while there have not been any major problems so far, trade across the Channel was slow until mid-January, and it probably will not be fully clear if the new system functions at full tempo until the end of February.

French companies are worried about another issue as well -- that Britain will adopt its own regulations and they will have to adapt.

For example, Toupret's products contain chemicals and thus the firm adheres to EU regulations known by the acronym REACH.

However, Britain plans to develop its own rules.

"That means we need to conform to European regulations as well as local British regulations," said Haworth, before adding that this will result in additional costs, including time spent by his staff.

But there is no question of the firm simply abandoning the British market after all the effort spent winning clients there.

"We're as determined as before, just we'll have to be more flexible and work much more, be more tenacious," Haworth said.

Uncertainty created by Britain's departure from the EU is even greater in the financial services sector, as the trade deal did not deal with it.

Many companies worry that from 2022 they will lose their regulatory "passport" to offer services on the other side of the Channel without having to create a local corporate structure.

"If the passport system disappears, which seems to be in the works, recreating a business in Britain seems like it will be very complex," said David Charlet, head of asset manager CC&A Finance Patrimoine.

If companies have to create a fully-fledged company in Britain "we risk having to abandon our clients in Britain to our British colleagues" while British firms will be under pressure to leave French clients to French firms.

Several thousand financial firms stand to be affected, according to Charlet, who until last year was the head of the European Federation of Financial Advisers and Financial Intermediaries.

"It's unlikely that all these firms will decide to create fully-fledged corporate structures, especially because we are a regulated profession and there are lots of constraints," he said.

Rather, Charlet expected firms would opt to deal with Britain like they do with the United States or China -- find a reliable local partner to whom they can refer clients.