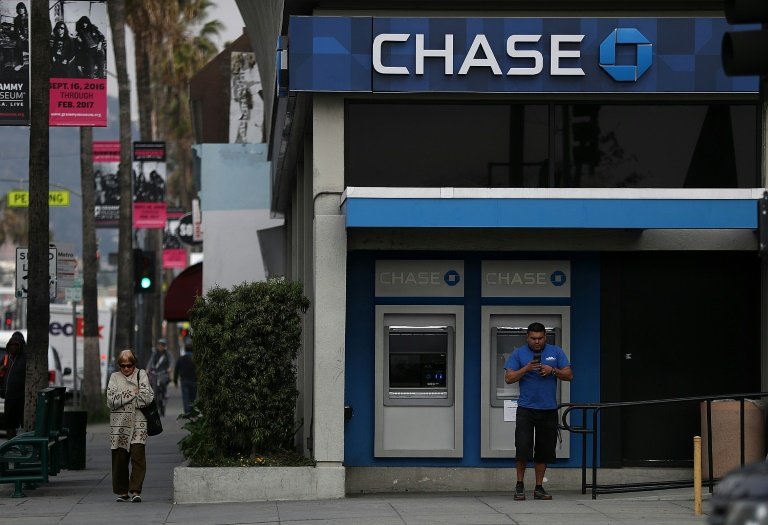 Large US banks reported Friday a mixed fourth quarter to conclude a turbulent year, but expressed optimism about 2021 thanks to the coronavirus vaccine and additional fiscal stimulus.

JPMorgan Chase, Citigroup and Wells Fargo all modestly lowered their reserves set aside earlier in the pandemic when coronavirus shutdowns prompted the banks to establish huge provisions in case of a wave of defaults due to a much sharper economic downturn.

The banks are still keeping billions of dollars in provisions for bad loans in case the economy takes another turn for the worse.

But executives are generally hopeful about the new year as coronavirus vaccines become more widely deployed and as President-elect Joe Biden advances a fiscal package expected to keep households flush with enough funds to pay their bills.

"You have a cloudy next two quarters of mixed economic information and you have almost 4,000 people dying today," said JPMorgan Chase Chief Executive Jamie Dimon.

But "we've got the vaccine coming, we've got fiscal stimulus and people have saved a lot of money," Dimon said on a conference call with reporters. "You've got a lot of pent-up demand and hopefully optimism by the fact that we're getting through this mess."

Citigroup Chief Financial Officer Mark Mason said conditions have improved even since the end of the fourth quarter, with more vaccines advancing and clarity over the next US presidential administration.

"There are a lot of favorable indicators that ... make for a positive outlook," he said. "And hopefully a continued stable recovery."

Shares of all three banks fell sharply Friday. However, the S&P financials index had risen nearly 32 percent over the last two and a half months.

JPMorgan reported record quarterly profits of $12.1 billion, up 42.4 percent from the year-ago levels, while revenues rose 3.3 percent to 29.2 billion.

But the bank still has $30 billion in reserves, which "continue to reflect significant near-term economic uncertainty and will allow us to withstand an economic environment far worse than the current base forecasts by most economists," the bank said.

Although US unemployment levels remain elevated and some business sectors like commercial real estate and hospitality are in dire straits due to the pandemic, aggressive fiscal support measures from Washington have mitigated the effect on many households.

Jennifer Piepszak, chief financial officer at JPMorgan, said clients in sectors still have "very very strong" access to liquidity, which has limited the charge offs so far. She said the bank was closely monitoring conditions in commercial real estate however amid rising vacancy rates.

At Citigroup, earnings dipped seven percent to $4.6 billion on a 10 percent drop in revenues to $16.5 billion.

Results were pressured by a hit from lower Federal Reserve interest rates. Citi's investment banking operations were mixed, due to lower merger and acquisitions advising revenues, offset by gains in market trading.

Mason, the Citi CFO, said US fiscal relief packages have enabled consumers to stay current with bills and that Biden's latest $1.9 trillion package should extend that trend.

"Without being able to forecast the future, it does seem as though consumers have maintained their ability to pay and that the stimulus program has been helpful in that regard," he said.

The results included one-time costs of $781 million in restructuring expenses as it aims to gain momentum following a series of scandals and missteps.

"Although our financial performance improved and we earned $3.0 billion in the fourth quarter, our results continued to be impacted by the unprecedented operating environment and the required work to put our substantial legacy issues behind us," said Chief Executive Charlie Scharf.