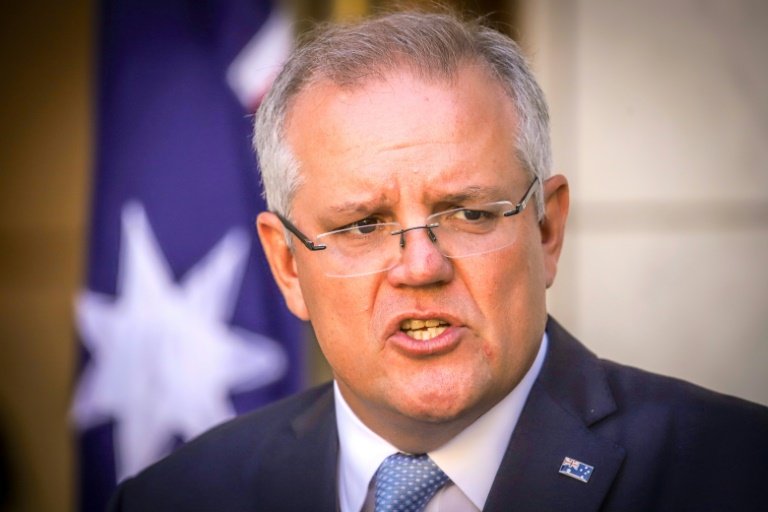 Australia has hit out at "needlessly" worsening relations with China, with the country's prime minister appealing for smaller nations not to be caught in the crossfire of Sino-US rivalry.

Prime Minister Scott Morrison decried mounting Chinese pressure and rejected the portrayal of Australia as a US lapdog, saying it was wrong and "needlessly deteriorates relationships" in an online speech to a London forum late Monday.

Morrison insisted Australia wanted "mutually beneficial" relations with both its largest trading partner and the United States, while having the right to pursue its own interests independent of both.

In recent months, Canberra's relationship with Beijing has gone from bad to worse.

Beijing has produced a laundry list of complaints about Australian policies -- from banning Huawei's participation in 5G rollout to its call for an investigation into the origins of the coronavirus pandemic.

It has also targeted sensitive Australian exports with economic sanctions, in a bid to increase the cost of defying China's wishes.

Morrison warned this coercive diplomacy was just "a foretaste" of what other countries -- including those in Europe -- can expect to endure in future.

But in a nod to the incoming administration of US president-elect Joe Biden, Morrison also insisted countries like Australia should not be asked to pick sides as Washington and Beijing duke it out for influence.

"Greater latitude will be required from the world's largest powers to accommodate the individual interests of their partners and allies. We all need a bit more room to move," Morrison told the UK Policy Exchange.

It is uncertain that Sino-US relations will improve under a Biden administration, with the Democrat outspoken during his campaign on China's dismal human rights record.

"There must be a more nuanced appreciation of individual states' interests in how they deal with the major powers. Stark choices are in no-one's interests," Morrison said.