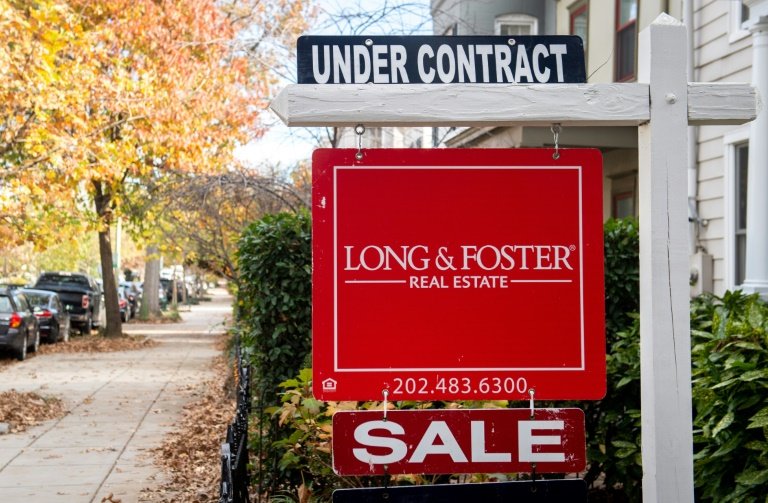 A home in the Washington area has been sold -- a small part of the booming housing market in the United States, but high prices have left some families incapable of buying a place of their own / © AFP

The US real estate market is booming even as the coronavirus crisis intensifies, and the seemingly insatiable appetite for new and older homes has sent prices soaring -- meaning more and more families with modest incomes are seeing their dreams of owning property shattered.

"It very much is a tale of haves and have nots," said Dana Scanlon, a property agent in the Washington area.

In a bid to mitigate the economic crisis provoked by the pandemic, the US Federal Reserve slashed interest rates in March to near-zero.

As Scanlon explains, "that gives a very big boost to buying power for those people who still have jobs... where they can work from home."

For some, it has, perhaps counterintuitively, even meant a "little uptick in savings" as commuting and other costs have been cut due to restrictions on travel and dining out, she says.

That means some families have more money to spend on upgrading to a bigger home -- or even considering buying a second home.

With many white-collar employees contemplating a long-term shift to telework, and children still going to school over Zoom, the pandemic is still fueling demand.

That soaring increase in home purchases has surprised industry experts, who still remember how the market bottomed out during the financial crisis of 2008-2009.

But all is not rosy for all Americans seeking to buy.

"There's a kind of a pyramid, or a ladder, of buyers," says Scanlon, who works in the US capital, Maryland and Virginia.

In October, sales of existing homes hit their highest level since early 2006, according to the National Association of Realtors (NAR).

But a dip in the number of available homes for sale has sent prices skyrocketing.

According to NAR data, the median price for individual houses rose to $313,500 in the third quarter, up 12 percent year-on-year.

As a result, more and more potential first-time home buyers are finding themselves unable to enter the market.

Indeed, the percentage of first-time buyers has dropped to 31 percent of the total in 2020, from 33 percent a year ago, according to the NAR's chief economist Lawrence Yun.

"Because of the strong price gain, it is increasingly becoming more difficult for renters to save up for a down payment," Yun said.

However, in April and May, households with more modest incomes were able to take advantage of low interest rates, said Tracey Scott, a real estate agent in West Virginia.

But since the summer, Scott admits more and more of her clients have been well-off families from the greater Washington area.

"We are probably two hours from Washington, DC," Scott told AFP. "But we still have a lot of land, mountain, rivers. The landscape is very beautiful in the mountains."

Some of Scott's clients are looking for a second home as an investment, but others are hoping to leave the city behind, now that offices are a vestige of the Before Times.

Scott said she "absolutely" did not expect to see such demand -- her agency has seen at least a 25 to 30 percent increase in the number of clients seeking second homes.

The boom in demand for second homes is two-fold -- as an investment but also as another potential primary residence if the trend towards telecommuting remains.

Scanlon agrees that work as we once knew it is likely gone forever.

But she is upset about the inequalities in the markets, saying: "Unfortunately, the have nots are always the ones who lose the most in any kind of an economic crisis."

For Yun, the only way to make it easier for first-time buyers is by "increasing supply -- via homebuilding, for example, and an incentive for real estate investors to sell their properties."