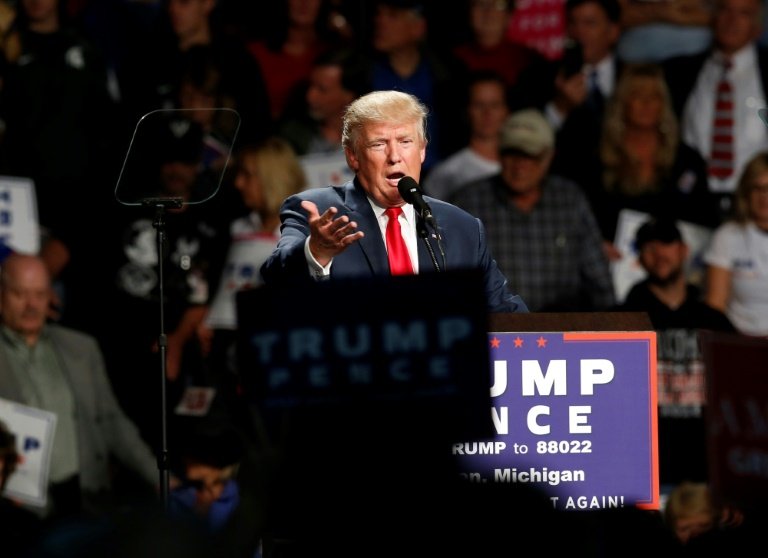 Candidate Donald Trump's campaign pitch in 2016 to revive US manufacturing was critical to his upset election victory over Hillary Clinton, helping him capture vital battleground states such as Michigan and Ohio, albeit by narrow margins.

Trump railed against free trade agreements and boasted he would be able to strong-arm Detroit's "Big Three" to shift jobs from Mexico to the United States.

But did he make good on those promises?

- How have auto jobs fared under Trump? -

The trend in US auto employment has mirrored the larger dynamic in manufacturing jobs, rising throughout much of Trump's presidency, but falling off a cliff in the wake of the coronavirus pandemic.

US auto employment rose 4.6 percent between January 2017 and the end of 2019, when it stood at around one million. 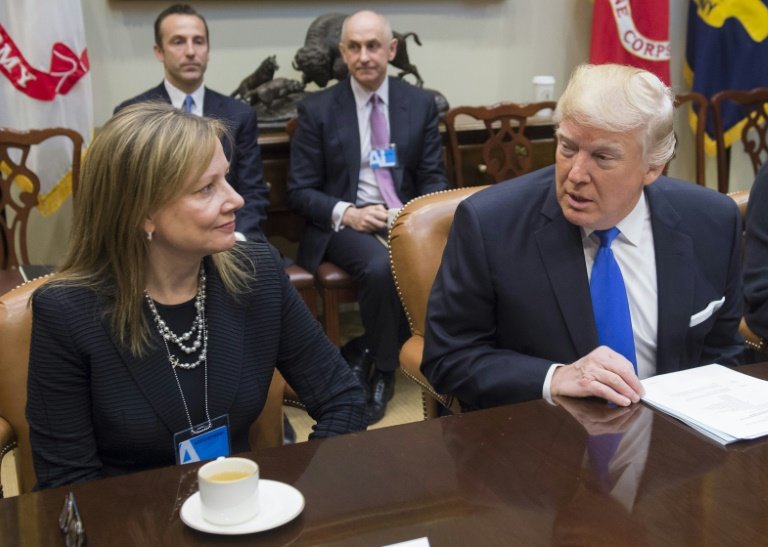 US President Donald Trump met with General Motors CEO Mary Barra and other Big Three leaders shortly after taking office; the industry has had a mixed record on US investment and jobs during Trump's tenure / © AFP/File

But since the coronavirus crisis erupted, employment fell to 919,500 in September, according to the latest estimates from the Bureau of Labor Statistics, down about 3.7 percent from when Trump took office.

The record is mixed at Detroit's "Big Three," which have traditionally been big employers in battleground states such as Michigan and Ohio.

General Motors has cut almost 20,000 US jobs since Trump took office, while Fiat Chrysler has added about 3,000 jobs, based on the latest company figures. Ford's overall US employment is about flat over the period, a spokeswoman said.

- Has production come back from Mexico? -

All of the Big Three continue to make cars in Mexico, though there has been some movement.

In January 2017 shortly before Trump took office, Ford dropped a plan to build a new factory in San Luis Potosi to manufacture a new Ford Focus, saying it would shift the $1.6 billion in funds from that venture into a plant in Michigan.

Trump cheered the FCA announcement, saying: "We are on the right track!" 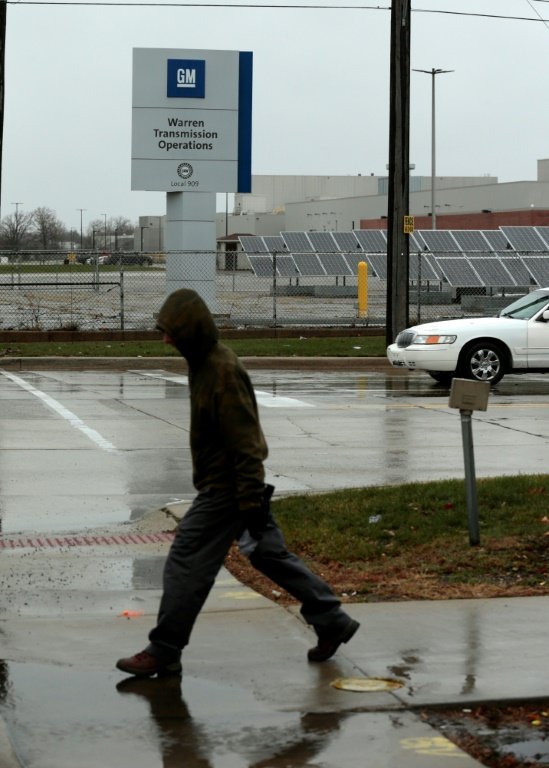 A worker walks in front of GM's plant in Warren, Michigan in November 2018, shortly after the company announced plans to shutter the factory / © AFP/File

But in February 2019, FCA reversed course, announcing it would continue producing Ram heavy trucks in Mexico. FCA currently has 11 manufacturing facilities in Mexico, according to a securities filing.

Kristin Dziczek, a vice president at the Center for Automotive Research in Michigan, said there is no evidence production has shifted under Trump.

In 2020 so far, US auto production is down 22 percent from the prior year, while Mexican output has fallen 19 percent, she said.

"It's yet to be seen how the USMCA is going to play out on investment decisions," Dziczek said of the new US-Mexico-Canada trade agreement, which took effect July 1.

The major American automakers have both added and closed plants since Trump took office. 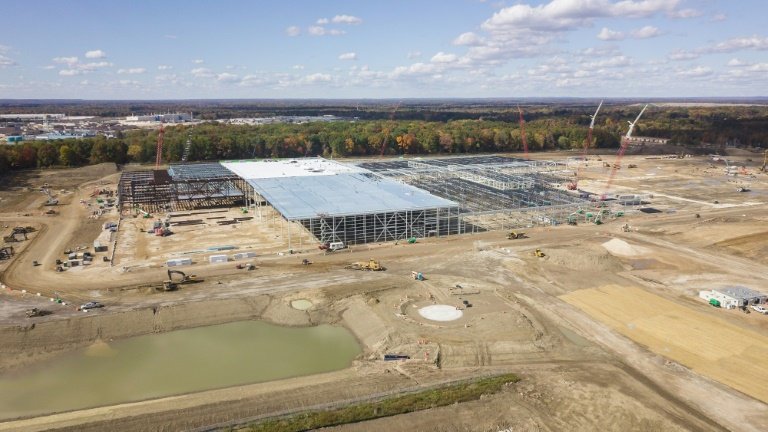 Ultium, a joint venture between GM and LG Chem, is now constructing a plant in Lordstown, Ohio for battery cells for electric cars, an example of new investment during Trump's term / © AFP

The most dramatic moves were at General Motors, which unveiled plans in November 2018 to cut 15 percent of its salaried staff and shutter five plants in North America, including facilities in Maryland, Michigan and Ohio.

Following a bruising strike led by the UAW, GM reversed course on one plant in Detroit, announcing it would invest $2.2 billion in the facility to make electric vehicles, supporting 2,200 jobs.

On Tuesday, GM announced a plan to invest $2 billion to upgrade a Tennessee factory to make electric cars, with Chief Executive Mary Barra touting a "vision of an all-electric future" and saying the company is "committed to investing the US, our employees and our communities."

FCA in February 2019 announced it would invest $4.5 billion in five Michigan plants and develop a new plant in Detroit to build new Jeep products, including plug-in hybrid models. 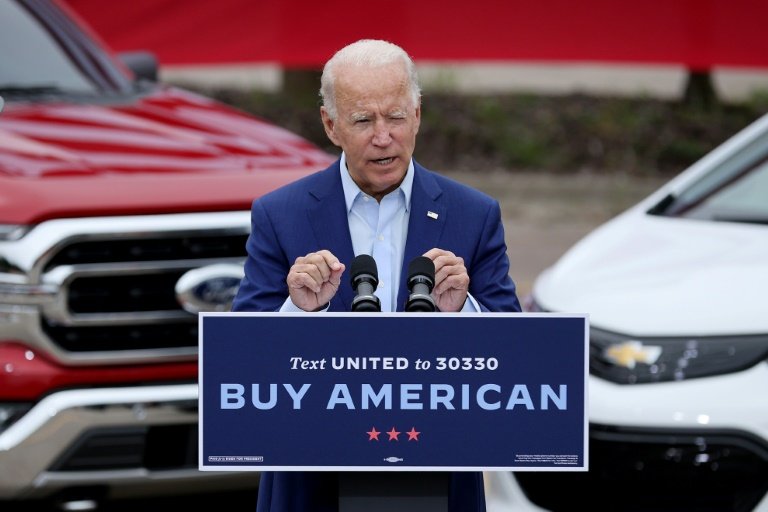 Ford also announced new investments in December 2019 after reaching an agreement with the UAW that included $1.5 billion in new spending to upgrade two Michigan plants. However, Ford said last month it would cut 1,400 salaried US jobs through voluntary buyouts.

Prior to Covid-19, the auto industry's overall performance had been solid if unspectacular, Dziczek said.

"It's done okay -- pretty much been status quo on a lot of things," she said. "Employment levels were basically flat."