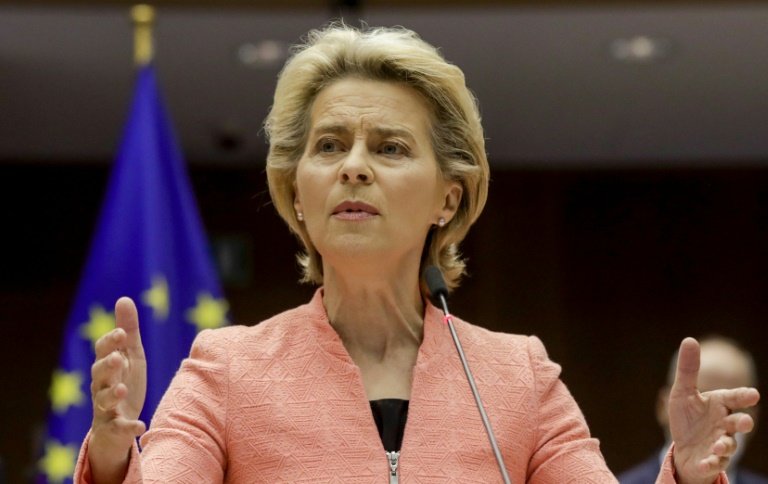 EU chief Ursula von der Leyen vowed Wednesday that Europe would lead the global search for a coronavirus vaccine while rebuilding its shattered economy with a green recovery plan.

EU chief Ursula von der Leyen vowed Wednesday that Europe would lead the global search for a coronavirus vaccine while rebuilding its shattered economy with a green recovery plan.

In her first annual State of the European Union address, the president of the European Commission also warned Britain not to breach the Brexit withdrawal treaty and Turkey not to threaten neighbours.

She promised reform of the EU's rickety asylum system and urged member states to step up for refugees.

And she recommitted the bloc to fighting racism and homophobia, denouncing the so-called "LGBT-free" zones set up by some towns in EU member state Poland.

In an implicit swipe at US President Donald Trump's approach to the pandemic, von der Leyen said Europe would lead the world in the search for a vaccine and support multilateral bodies like the World Health Organization.

"None of us will be safe until all of us are safe -– wherever we live, whatever we have," she said. "Vaccine nationalism puts lives at risk. Vaccine cooperation saves them."

Europe's own economy has been devastated by the epidemic and the ensuing economic and social lockdowns, but von der Leyen touted her Commission's green recovery plan as a way back.

She said that Brussels would urge member states to set a more ambitious goal of cutting greenhouse emissions by 55 percent by 2030, up from a target of 40 percent.

"For us, the 2030 target is ambitious, achievable, and beneficial for Europe," she added.

The new target is backed by EU powers France and Germany, as well as big business, but faces stern resistance from eastern member states that depend on coal for their energy needs.

Poland's climate ministry said it was "concerned" the Commission was launching the more ambitious goal "without presenting measures to implement it".

Warsaw recently earmarked billions for its first nuclear power plants. Slated to go online by 2033, they are meant to ease the transition away from coal, but Poland is keen to secure transition funding from Brussels.

EU leaders will attempt to agree on the target at a summit in October, which would then need the approval of European Parliament, where a majority of MEPs want a still more ambitious target.

Von der Leyen said that 30 percent of spending from the 750-billion-euro ($890-billion) plan would be devoted to climate-friendly projects and financed through so-called green bonds.

In a broadside aimed at Poland's populist government, she also declared that so-called LGBT-free zones have "no place in our union".

"I will not rest when it comes to building a union of equality... a union where you can be who you are and love who you want -- without fear of recrimination or discrimination," von der Leyen said.

A number of Polish towns have declared themselves "LGBT ideology free zones", and President Andrzej Duda has compared the struggle for equality to communism in terms of the alleged threat it poses to national values.

Brussels has denounced this stance before, but von der Leyen's speech went further as she vowed to push EU member states to recognise adoptions by same-sex couples across the bloc.

To applause, von der Leyen also re-committed her European Commission to the fight against racism.

"Hate is hate -- and no one should have to put up with it," she said, vowing to use the budget to address discrimination in employment, housing and health care and to appoint an anti-racism coordinator.

And she promised that the bloc would move on from the so-called Dublin Regulation, which requires the first EU country where asylum seekers arrive to process their claims.

"Migration is a European challenge and all of Europe must do its part," von der Leyen said.

The Commission is due to lay out proposals for reforming the thorny issue on September 23.

The 61-year-old former German defence minister also warned Turkey against trying to bully Greece and Cyprus, as tensions grow over energy reserves in the eastern Mediterranean.

And she had a stark warning for another troublesome neighbour, Britain, which she warned was threatening the peace in Northern Ireland by trying to override the Brexit withdrawal agreement.

The row over Prime Minister Boris Johnson's attempt to pass a law to override the divorce pact has also overshadowed talks to reach a trade deal before the end of the year, when the UK leaves the EU single market.

"With every day that passes, chances for a timely agreement do start to fade," she said.

The existing withdrawal agreement is "the best and only way to ensure peace on the island of Ireland. And we will never backtrack on that," von der Leyen added.