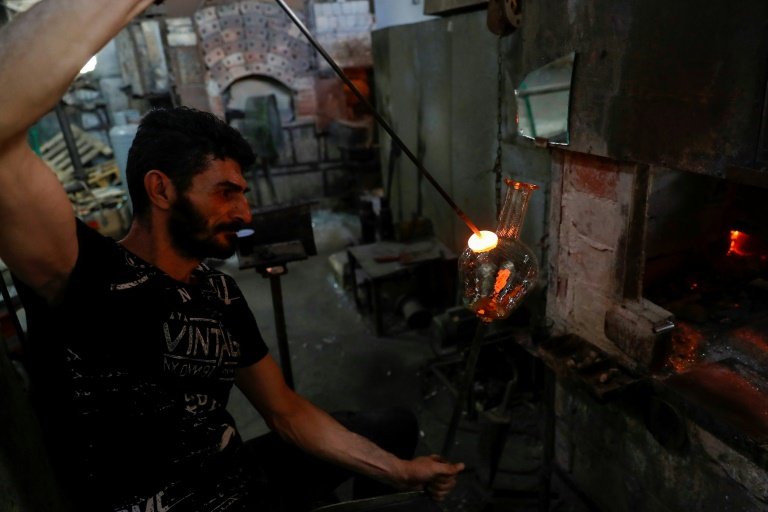 A glass blower shapes traditional water pitchers at the Uniglass factory in Tripoli, north Lebanon, where glass broken in the Beirut port explosion is being repurposed / © AFP

Standing in a pile of broken glass in northern Lebanon, a man heaved shovel-loads of shards -- retrieved from Beirut after the massive explosion at its port -- into a red-hot furnace.

Melted down at a factory in the second city Tripoli, they re-emerged as molten glass ready to be recycled into traditional slim-necked water jugs.

Volunteers, non-governmental groups and entrepreneurs have tried to salvage at least part of the tonnes of glass that littered the streets, some of it through recycling at Wissam Hammoud's family's glass factory.

"Here we have glass from the Beirut explosion," said Hammoud, deputy head at the United Glass Production Company (Uniglass), as several men sorted through a mound of shards outside the building.

"Organisations are bringing it to us so that we can remanufacture it," said the 24-year-old.

As workers washed and stacked jars behind him, Hammoud said between 20 and 22 tonnes of glass had been brought to the factory, a hive of rhythmic activity centred around the furnace that burns at 900-1,200 degrees Celsius (1,650-2,190 Fahrenheit).

Nearby, three men produced jars stamped out of a mold in a carefully choreographed sequence, while another two handled the more delicate process of blowing and forming the traditional Lebanese pitchers.

"We work 24 hours a day," Hammoud said. "We can't stop because stopping costs too much money."

In the first days after the blast, he teamed up with civil-society organisations and a host of volunteers to come up with a plan to keep as much glass as possible out of landfills already overburdened by a decades-old solid waste crisis.

"We decided that at least part of the shattered glass... our local industries should benefit from as a raw material," Abichaker told AFP. 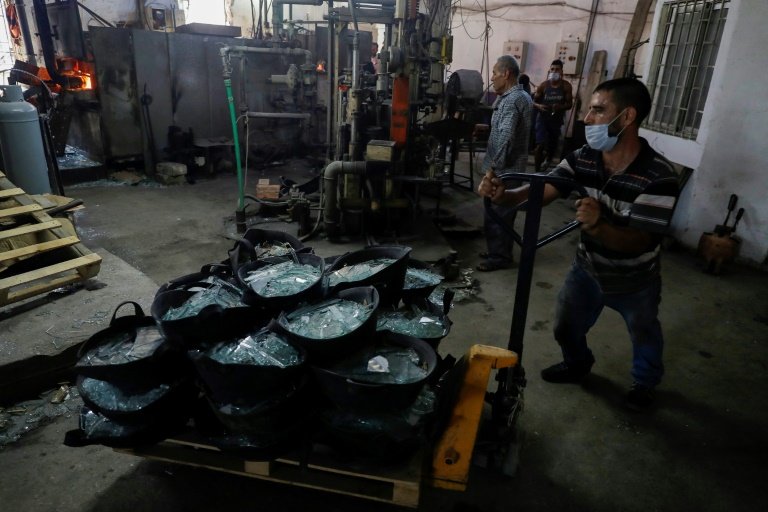 From mid-August to September 2, up to 22 tonnes of glass were sent from Beirut for reuse at Uniglass in Tripoli / © AFP

"We're diverting glass from ending up in the landfill, we're supplying our local industries with free raw material," he added.

According to him, more than 5,000 tonnes of glass was shattered by the explosion.

From mid-August to September 2, almost 58 tonnes were sent for reuse at Uniglass and Koub/Golden Glass in Tripoli.

Abichaker said he hoped, with funding, to bring the total to 250 tonnes.

At the volunteer hub dubbed the Base Camp in Beirut's hard-hit Mar Mikhael district, young men and women kitted out with sturdy shoes, masks and heavy gloves sort the glass, pulling bits of detritus out of the piled shards under a scorching sun.

Anthony Abdel Karim, who months before the blast had launched an upcycling glass project called Annine Fadye or "Empty Bottle" in Arabic, coordinates the operations.

We have "mountains of waste that are piling up in Beirut, they're mixed with everything. Glass and rubble and metal are mixed with organic waste... and this is not healthy," he said. 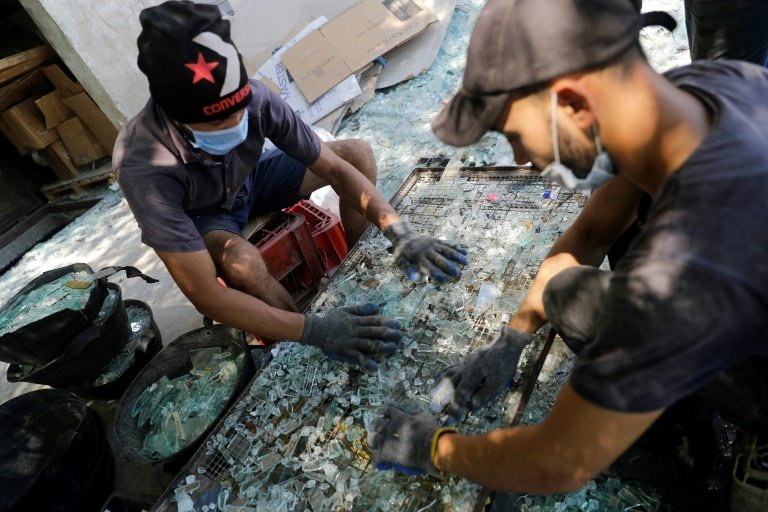 "We don't have proper recycling in Lebanon."

Abdel Karim was drawn to recycling glass after seeing huge numbers of bottles being thrown out while working in events management in Beirut's nightlife, one of the city's calling cards first quieted by the pandemic and economic crisis, and now battered by the blast.

Glass from the explosion poses different challenges from bottles, as much of it is dirty, so the initiative focuses on gathering glass from inside homes and other buildings, setting up a hotline where people can request pickup.

Abdel Karim said they aim to find other ways of recycling the glass that is not suitable to send to Tripoli, possibly by crushing it to be used in cement or other materials.

"This is the tip of the iceberg," he said, noting just a fraction of the glass so far had been collected and repurposed.