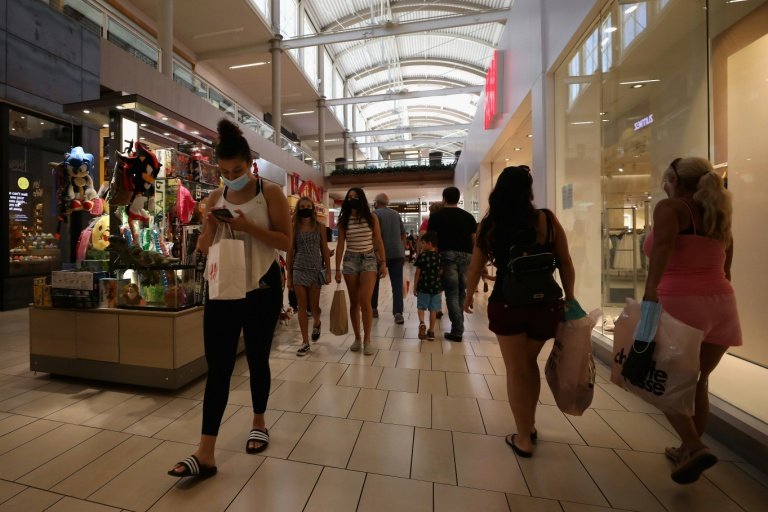 Americans ramped up spending again in June and prices inched higher following the collapse caused by COVID-19, but the data released Friday reflect the time before cases began to resurge.

Personal consumption expenditures (PCE) rose 5.6 percent last month, after gaining 8.5 percent in May, the Commerce Department reported, and the PCE price index rose 0.4 percent compared to the prior month.

The data, which already were incorporated into the historic 32.9 percent plunge in second quarter GDP reported Thursday, also showed what many hoped would be the start of a recovery after consumption in April plunged just under 13 percent amid falling prices.

But the coronavirus made a comeback in July with case counts rising and many states like California, Texas and Arizona reimposing restrictions and business closures, and Florida setting new daily records.

Personal income fell 1.1 percent last month after its 4.4 percent drop in May, which "was more than accounted for by a decrease in government social benefits to persons as payments made to individuals from federal economic recovery programs in response to the COVID-19 pandemic continued, but at a lower level than in May," the report said.

But many of the federal benefits expire Friday and Congress has not agreed on a new support bill, at the same time that job losses show signs of increasing as the virus spikes.

"In spite of the rebound, the outlook for household spending is uncertain especially given recent virus-induced shutdowns that will once again result in layoffs," said Rubeela Farooqi of High Frequency Economics.

"Expiring enhanced unemployment benefits will be an added shock to incomes. Subdued support from household spending will likely result in a more muted bounce in growth in Q3."