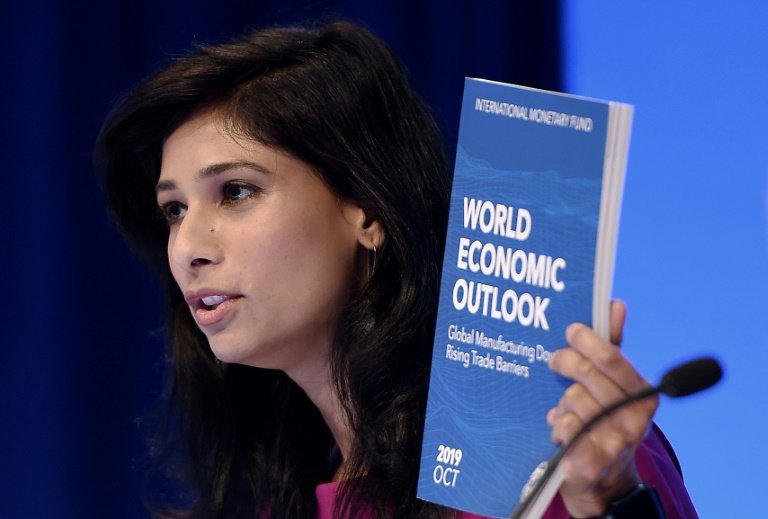 The global coronavirus pandemic has sparked an economic "crisis like no other," sending world GDP plunging 4.9 percent this year and wiping out $12 trillion over two years, the IMF said Wednesday.

The global coronavirus pandemic has sparked an economic "crisis like no other," sending world GDP plunging 4.9 percent this year and wiping out $12 trillion over two years, the IMF said Wednesday.

Worldwide business shutdowns destroyed hundreds of millions of jobs, and major economies in Europe face double-digit collapses in the worst crisis since the Great Depression nearly a century ago.

The prospects for recovery post-pandemic -- like the forecasts themselves -- are steeped in "pervasive uncertainty" given the unpredictable path of the virus, the IMF said in its updated World Economic Outlook.

"The COVID-19 pandemic has had a more negative impact on activity in the first half of 2020 than anticipated, and the recovery is projected to be more gradual than previously forecast," the fund warned.

While businesses are reopening in many countries and China has seen a bigger rebound in activity than expected, a second wave of viral infections threatens the outlook, the report said.

World GDP is expected to rebound by just 5.4 percent in 2021, and only if all goes well, the IMF warned.

IMF chief economist Gita Gopinath said under current forecasts, the crisis will destroy $12 trillion over two years, and cautioned, "we are not out of the woods."

She warned governments against withdrawing the stimulus too quickly. 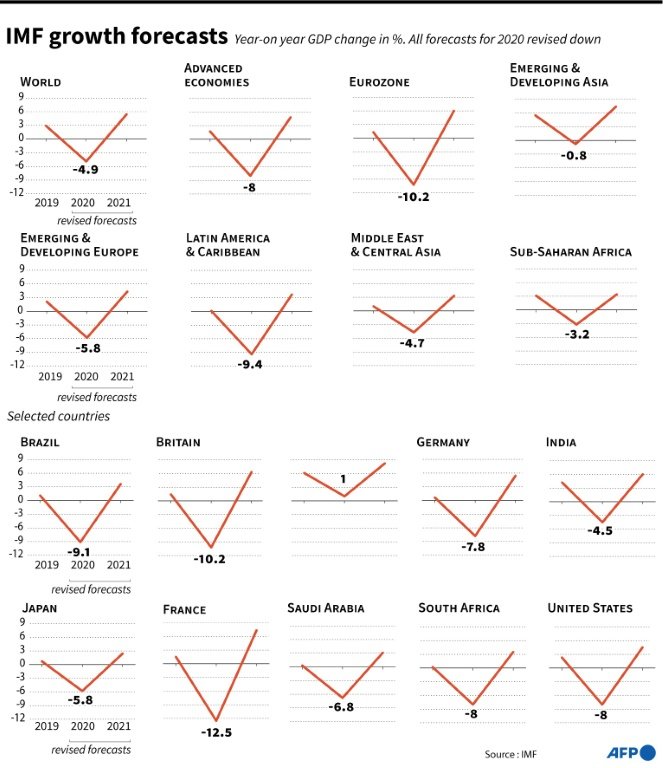 "This is a crisis that requires all hands on deck," she told reporters. While governments and central banks have gone to extraordinary lengths so far to provide support for workers and businesses, "more will be needed."

"It's important not to back off very quickly, but to do so only gradually, because this crisis is not over," Gopinath said.

The downturn is particularly damaging for low-income countries and households, and threatens to endanger the progress made on reducing extreme poverty, the Washington-based crisis lender said in its report.

The fund made drastic downward revisions to most of the April forecasts made in the early days of the pandemic, and IMF economists fear the coronavirus will leave lasting scars on employment, businesses and trade.

Hanging over the predictions are the bills for massive government stimulus plans, fueled by extremely low interest rates and likely preventing the recession from turning into another depression, even as they created huge and ever-increasing debt levels.

The damage is nonetheless stunning, and more widespread than any downturn in recent decades. 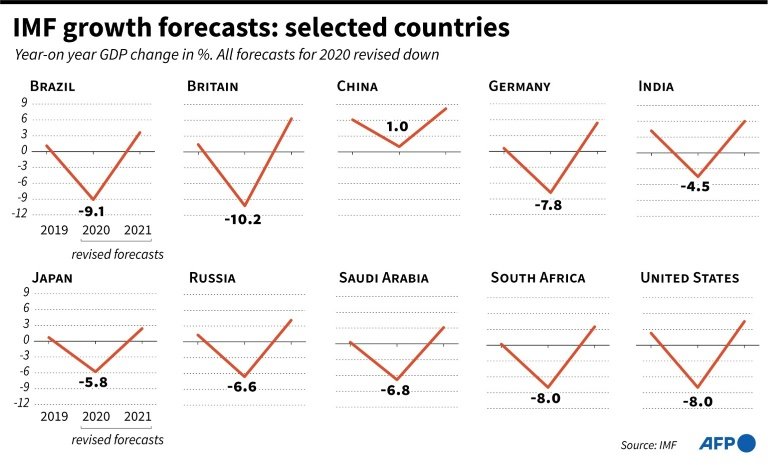 China will eke out growth of one percent this year, the only positive figure on the long list of key economies the IMF tracks.

The United States will shrink eight percent and Germany slightly less, while France, Italy, Spain and Britain will suffer double-digit contractions. Japan makes out a bit better with a drop of just 5.8 percent, according to the forecasts.

Mexico also will see a double-digit decline, while Brazil just misses that mark, as does Argentina, which is in the middle of a massive debt crunch on top of its health and economic crises after the country once again defaulted on its foreign obligations.

The IMF pointed to International Labour Organization data estimating more than 300 million jobs were lost in the second quarter of the year.

"A more prolonged decline in activity could lead to further scarring, including from wider firm closures, as surviving firms hesitate to hire jobseekers after extended unemployment," the fund warned.

With transport and manufacturing shut down for weeks, the IMF projects global trade volume will collapse by just under 12 percent -- and advanced economies will see an even more dramatic drop.

The IMF also warned of dangers posed by eroding relations between and within countries.

"Beyond pandemic-related downside risks, escalating tensions between the United States and China on multiple fronts, frayed relationships among the Organization of the Petroleum Exporting Countries (OPEC+) coalition of oil producers and widespread social unrest pose additional challenges to the global economy," the report said.

Amid the uncertainty, there is a chance the recession could be less severe than forecast, the report said.