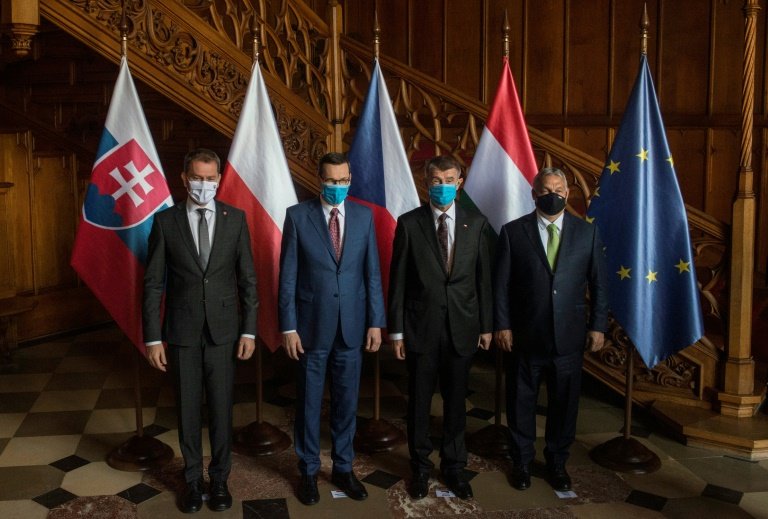 The prime ministers of Slovakia, Poland, the Czech Republic and Hungary met in the EU's first major face-to-face political meeting since the coronavirus lockdown / © AFP/File

Four central European prime ministers called for a "fair" distribution of the EU's massive recovery fund on Thursday, at what has been dubbed the bloc's first major face-to-face political meeting since the coronavirus lockdown.

Sporting face masks and gloves, the Czech, Hungarian, Polish and Slovak leaders failed, however, to agree a common stance on the 750-billion euro ($850-billion) fund.

The European Council is due to hold a video summit on June 19 on the controversial stimulus package, the EU's largest to date.

Hungary's Viktor Orban wore black gloves and the other three leaders of the so-called Visegrad-four (V4) countries donned white ones for the initial handshakes at the grand neo-Gothic Lednice castle, nestled in the picturesque southeastern corner of the Czech Republic.

Introduced by Brussels last month, the "Next Generation" recovery package has been slammed by fiscally conservative members of the bloc, like the eastern V4 countries.

"We want to send a signal together... that we should be fair," Slovak Prime Minister Igor Matovic told reporters.

Slovakia and Poland turned out to be more conciliatory on the fund than Hungary and the Czech Republic, which holds the rotating V4 presidency.

"I think the main criterion should be the GDP slump (for each member) and that must be assessed early next year," said Czech Prime Minister Andrej Babis.

A fervent critic of the EU, Viktor Orban said the fund was "philosophically quite far from what the Hungarians think about the world."

"The Hungarians think you must first make money and then you can spend it," he said.

"We are willing to accept it, because we feel positive about the initiative, but it still needs to be worked upon," Orban added.

With the exception of Poland, which has recently seen a spike in COVID-19 cases, the V4 countries fared well in the battle against the virus, having imposed restrictions in a timely manner.

The meeting was overshadowed by an attack on a school in Slovakia, with all four premiers sending condolences after a knife-wielding man fatally stabbed a teacher on Thursday morning.