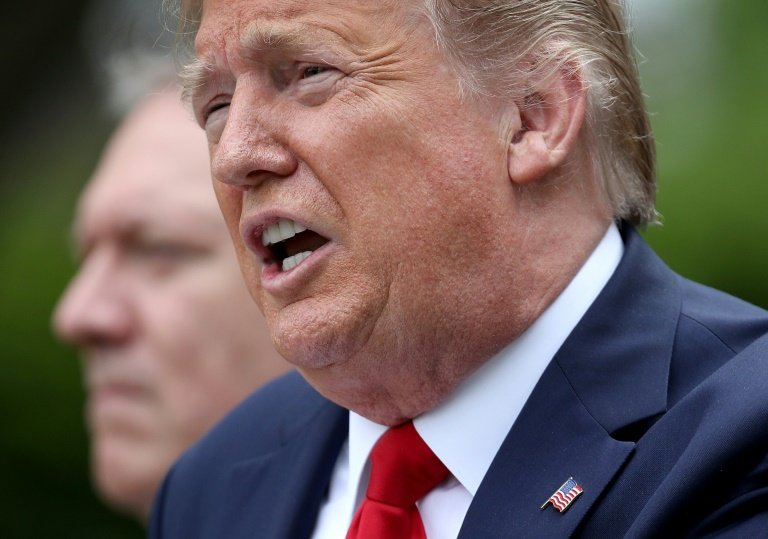 President Donald Trump announced the US would pull out of the World Health Organization in a speech that sharply criticized China, but he made no mention of trade tariffs / © GETTY IMAGES NORTH AMERICA/AFP

Trading in US stocks was choppy throughout the session, with major indices sinking into negative territory as a mid-afternoon White House speech by President Donald Trump began.

Trump harshly criticized China's handling of the coronavirus, blaming the country for the deaths of 100,000 Americans, and announcing new actions including an end to funding for the World Health Organization.

But Trump made no mention of the "phase one" trade agreement with China that walked back earlier trade tariffs, nor did he threaten new levies on US imports from the country.

"When (Trump) first started talking, he sounded pretty hawkish, there was an initial knee-jerk selloff," said Briefing.com analyst Patrick O'Hare. "When it became clear he wasn't saying anything about tariffs, there was a snapback rally."

While the Dow finished narrowly lower, both the S&P 500 and Nasdaq ended solidly higher.

Many analysts expect Trump to continue to rail against China in the months ahead as he faces a challenging path to re-election in light of COVID-19 and the resulting economic slowdown.

Gorilla Trades strategist Ken Berman cautioned that "the possible collapse of the 'phase one' (trade deal) poses a risk to the global economic recovery, especially since the exact damage of the virus is still uncertain."

Earlier, bourses in Paris, Frankfurt and London retreated in anticipation of Trump's speech, which was delivered after European markets closed.

Renault was the biggest loser in Paris, with shares crashing by more than seven percent after the company revealed a radical restructuring plan to save two billion euros ($2.2 billion) over three years.

The French carmaker plans to axe almost 15,000 jobs, including 4,600 at core operations in France as it seeks to steer out of a cash crunch exacerbated by the coronavirus crisis.

At the other extreme, Williams-Sonoma surged 14.0 percent as it reported a surprise profit despite having all its stores shuttered for more than half the quarter, fueled by surging sales of cooking equipment while much of the US was stuck at home under quarantine orders.

But Williams-Sonoma withdrew its full-year profit forecast, saying that while current trends in its businesses are still strong, there was still uncertainty about the lasting macroeconomic drag from coronavirus shutdowns.