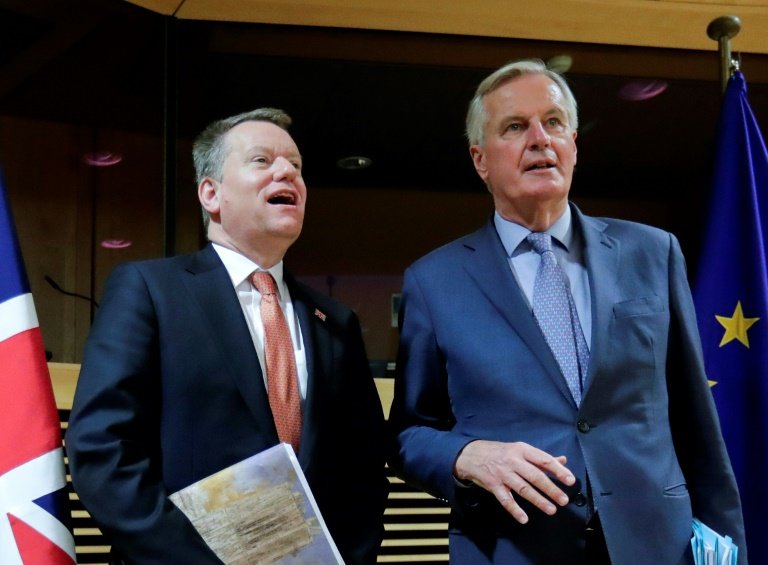 A joint statement following a call between EU negotiator Michel Barnier (R, pictured March 2020) and UK counterpart David Frost made no mention of postponing the end of Britain's transition out of the bloc beyond December 31, 2020 / © POOL/AFP/File

A joint statement following a call between EU negotiator Michel Barnier and UK counterpart David Frost made no mention of postponing the end of Britain's transition out of the bloc beyond December 31.

"The two sides agreed on the need to organise further negotiating rounds in order to make real, tangible progress in the negotiations by June," they said, describing the videoconference as "constructive".

To this end, both negotiating teams will meet by video conference to thrash out various "chapters" of the future trading relationship between Britain and the EU single market.

These rounds will last roughly a week each -- starting on April 20, May 11 and June 1 -- with an additional "high-level" meeting in June to take stock before they decide whether a delay is necessary.

Britain's Prime Minister Boris Johnson insists there is no question of the UK remaining under EU rules after December 31.

However, some observers have warned that the coronavirus epidemic has made a quick deal impossible.

Under the Brexit withdrawal agreement, the sides must decide on a delay of a year -- or up to two years -- before the end of June. With no deal nor delay, British trade with Europe could face serious disruption.

Barnier and Frost have both been isolated after testing positive for coronavirus, and Johnson got seriously ill and was hospitalised with COVID-19, throwing the future of the negotiations into doubt.

But even when all three are fully recovered, the sides will remain far apart both literally -- they talk by video link from London and Brussels -- and politically -- they have different visions of a future trade arrangement.

A European official told AFP that Brussels is still waiting for some British negotiating texts, notably on fishing rights, an early sticking point that could derail the whole talks process.

While London is trying to negotiate a series of packages in different domains -- fishing, goods, aviation, justice and energy among others -- EU leaders want a single overarching structure for ties with the former member.

All European economies, however, are taking a massive hit from the global pandemic and associated lockdowns and it is not yet clear whether this will shift negotiating positions.