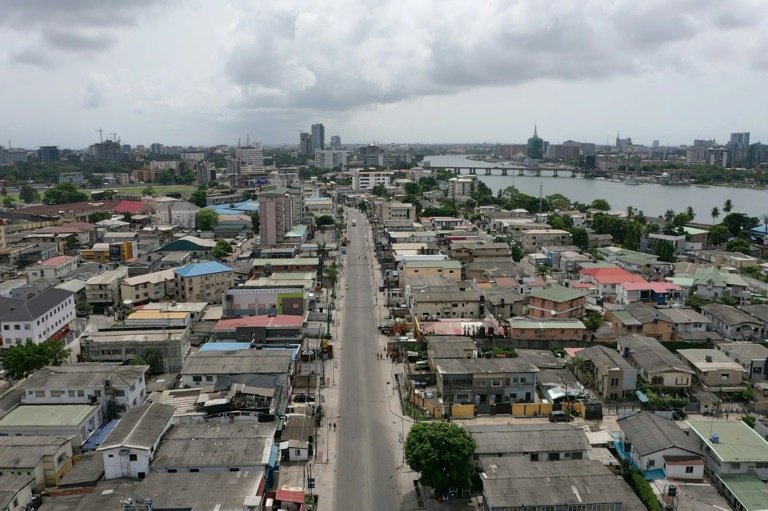 Lagos under lockdown: The pandemic will have a devastating effect on African growth this year, says the World Bank / © AFP

The World Bank warned Thursday sub-Saharan Africa could slip into its first recession in 25 years because of coronavirus and called for debt relief to ease the impact on the world's most impoverished region.

The virus has arrived late in Africa compared to elsewhere but is spreading rapidly in some countries, and the continent is highly vulnerable to declining trade and tourism and falling prices for oil and minerals.

Coronavirus could cost the region between $37 billion and $79 billion in output losses for 2020, said the twice-yearly update.

"The COVID-19 pandemic is testing the limits of societies and economies across the world, and African countries are likely to be hit particularly hard," said Hafez Ghanem, the Bank's vice president for Africa.

The impact will vary between countries, however, with real GDP forecast to "fall sharply" in the region's three largest economies -- Nigeria, South Africa and Angola -- because of "persistently weak growth and investment" and declining commodity prices.

The continent's most industrialised country, South Africa, slipped into recession in the final quarter of 2019 and has posted its weakest growth rates ever in the past five years -- never exceeding 1.3 percent and in some years falling below one percent.

"That is dragging down growth... and therefore significantly reducing average growth across Africa."

Zeufack predicted GDP shrinkage this year of between six and seven percent in the region's three economic superpowers.

The collapse in oil prices is "catastrophic" for public finances in the continent's leading crude producers, Nigeria and Angola, he added.

"We are living in unprecedented times," Zeufack said. "The world has not seen this since World War II."

"This is going to be the deepest recession globally but also affecting Africa, and the reason why this is so serious is because it is not just a health crisis, it’s a health crisis that’s going to be combined with an economic crisis and potentially a food crisis in African countries."

While governments are taking varying steps to deal with the economic fallout of the pandemic, the bank said African countries will inevitably require debt relief.

"There is no doubt there will be need for some sort of debt relief from bilateral creditors to secure the resources urgently needed to fight COVID-19 and to help manage or maintain macroeconomic stability in the region," said Cesar Calderon, lead author of the report.

The bank said it will be giving out up to $160 billion in financial support over the next 15 months to help countries protect the vulnerable, support businesses and shore up economic recovery.

The pandemic will also worsen food shortages on a continent already grappling with drought, locust invasions conflict and violence, the Bank said.

It predicted the region's agricultural production to contract by up to seven percent and food imports could decline by as much as 25 percent due to higher transaction costs and lower demand.

Domestic currencies are already losing value while prices of staple foods are rising in many parts of the continent.

The UN World Food Programme (WFP) said Wednesday that since December, hundreds of thousands more people had already slipped into the severely hungry category in Zimbabwe, where more than half of the population faces hunger.

"We can close borders to limit population from moving but trade needs to remain open," within and between African countries, cautioned Zeufack.

The Bank's report was released on the back of an African Union study revealing that about 20 million jobs on the continent are at risk as economies shrink due to coronavirus.

The AU study, published Monday, also called for the cancellation of total African external debt, which is valued at $236 billion.

But the Bank's Zeufack pointed out that there could still be a silver lining to the crisis.

"This could actually be an opportunity to strengthen our regional value chains," said Zeufack. "To produce some of the manufacturing goods that are so needed by African economies."