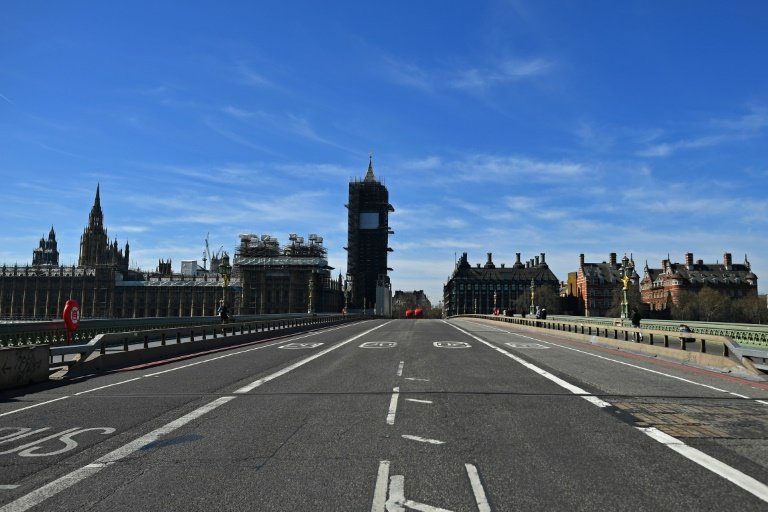 Britain on Tuesday said it will open a 4,000-bed field hospital at a London exhibition centre to treat coronavirus cases in the latest measure to tackle the outbreak after the government ordered a nationwide lockdown.

Prime Minister Boris Johnson on Monday imposed a three-week lockdown to tackle the outbreak, which has seen 422 deaths and 8,077 cases in Britain.

He urged people to "stay at home" to stop close-contact transmission and ease pressure on the state-run National Health Service, amid concern at current rates of infection.

Non-essential shops and services were told to shut, with unprecedented peacetime restrictions on movement, including a ban on gatherings of more than two people.

In further measures, Health Secretary Matt Hancock said the NHS Nightingale Hospital will start running next week at the giant ExCeL venue in the east of the capital.

"The NHS Nightingale Hospital will comprise two wards, each of 2,000 people," he told a news conference.

"With the help of the military and NHS clinicians, we will make sure we have the capacity we need so everyone can get the support they need."

Hancock announced a boost in numbers for overstretched medical teams, announcing that 11,800 retired and former NHS workers would return to duties.

They would be bolstered by 5,500 final-year medics and 18,700 student nurses in their last year of study from next week.

"In total that's over 35,000 more staff coming to the NHS when the country needs the NHS most," he told reporters in a "virtual" news conference from Downing Street.

He also called for 250,000 volunteers to help with grocery shopping and delivering medicine to the elderly and those self-isolating.

The first day of lockdown saw many streets deserted, although reduced traffic still circulated in London and construction workers were allowed to stay on site.

Britons were told to stay inside, except to buy essential, medicine or take daily exercise.

But there were questions about the extent of the measures and how they will be enforced.

The prime minister's spokesman said police would use their discretion in enforcing the lockdown and focus on dispersing groups of people.

Those failing to pay "could be subject to criminal proceedings and a summary conviction", he added.

Police numbers though were thinly spread even before the outbreak which has caused further shortages due to officers self-isolating.

But there was concern about the guidelines after another day of packed rush-hour trains on the London Underground "Tube" network, partly because of a reduced virus-hit timetable.

Hancock urged London Mayor Sadiq Khan to increase tube services but he said that was impossible because growing numbers of staff were off sick or self-isolating.

Britain has been slower than some of its neighbours to impose a shutdown and introduce compulsory testing of anyone displaying symptoms to give a truer picture of the virus' spread.

Johnson insists he has been following the scientific advice, but some commentators suggest his instinctive dislike of telling people what to do has played a part.

The government last week told people to maintain 'social distancing' and on Friday shut pubs, restaurants and cafes only to see crowds packing parks and beaches over the sunny weekend.

AFP reporters on Tuesday reported quiet streets with shops shuttered and pavements emptied except for joggers and dog walkers.

In Edinburgh -- heavily reliant on tourism -- tour guides, buses, bagpipers on street corners were nowhere to be seen, as the Scottish capital turned into a ghost town.

Johnson's government has already announced unprecedented measures to help businesses and workers hit by the economic fallout as the latest statistics showed a record slump in industrial output.

He promised an announcement "in the coming days".