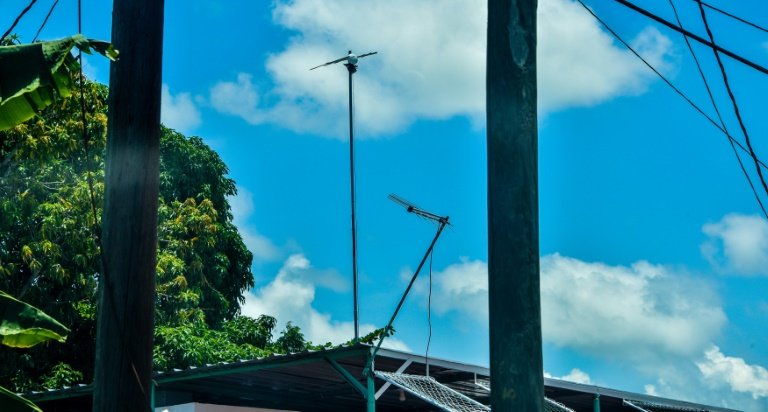 In Havana, residents install antennas on the roofs of their homes to pick up the state WiFi signal that is only available in public squares and parks / © AFP/File

What, no internet? That is no problem for Juan, who used to play the e-sports game Dota 2 on a giant local intranet created with a massive network of cables and antennas connecting thousands of homes in Havana.

Except it was illegal, so Cuba's one-party communist authorities decided to clamp down on the practice, meaning the service had to adapt or be shut down.

It's called SNET -- "Street Network" -- and began with people linking one home to another using rudimentary wiring. Eventually, the entire capital city was connected to an intranet through antennas and nine huge servers.

As the popularity of online multiplayer video games exploded around the world thanks to developing technology, Cuba was left behind in a telecommunications black hole.

But Cubans learned to adapt and simply created their own intranet to play amongst themselves.

"I connected to a friend with a 100-meter network cable, and he connected with another 100-meter cable to a friend who was using a Nanostation M2 (which supplies wireless connectivity) to connect to our local administrator," Juan, who chose not to reveal his surname, told AFP.

It's a totally localized network within a single city -- it's not even connected to anywhere else in Cuba -- and used by an estimated 40,000 people.

Other areas have started to replicate it, and there was even a plan to try to interconnect.

While its creation circumvented the island's restrictions, SNET is no lawless land. There are rules: no pornography or politics.

"SNET helped me to improve in e-sports like Dota 2 or World of Warcraft... it helped me find new friends and get access to a Cuban community of mostly gamers and to learn programming," said Juan.

The challenges for internet users, let alone gamers, are manifold in Cuba, where 3G technology only arrived last December -- and that was considered a huge leap.

Without widespread domestic internet connection, most people connect to the state WiFi service provided in public squares and parks, but that costs $1 an hour -- in a country where the minimum wage is $16 a month.

At the end of last month, the government authorized the use of domestic antennas, which many Cubans were already using from home to capture the public WiFi signal from their own sofas.

At the same time, authorities regulated cabling, the use of radio space and the power of a wireless apparatus. And that was where SNET hit a brick wall.

SNET used imported wireless technology that, while illegal, was tolerated. The problem was that the infrastructure was competing with the state telecommunications company ETECSA.

Due to the new regulations, those signals could interfere with state ones, making the house-to-house cabling system illegal.

"We have one of the only offline Dota 2 platforms with everything that makes it work, developed by a Cuban. We have our own servers for Steam, World of Warcraft, etc. Hundreds of multiplayer games," said Juan, who was also the administrator of one of those games.

Faced with the possible closure of SNET, around 20 users went to the communications ministry in early August to protest the new rules but left disappointed.

A new protest was called for August 17 but several SNET users were subjected to police intimidation and warned against attending.

On the day of the protest, guards were stationed outside the ministry.

SNET's administrators were asked to find a different solution.

One was found: authorities would absorb SNET into the largest state network, Joven Club (JCC), which has 644 installations including 260 linked by fibre optic cables. There was still no internet connection, but now there was a national grid.

Initially, the solution faced resistance, which eventually turned to resignation and finally optimism over the potential to expand the network of players.

"The good thing is that through JCC, SNET will be able to connect to similar networks in other Cuban cities through the state fibre optic cables," an ex-administrator told AFP.

But the United States embassy in Cuba sees a sinister side to this, claiming on its Twitter account that it's only there "to subject the users to regime control and surveillance."

For the communications ministry, though, "the country won."