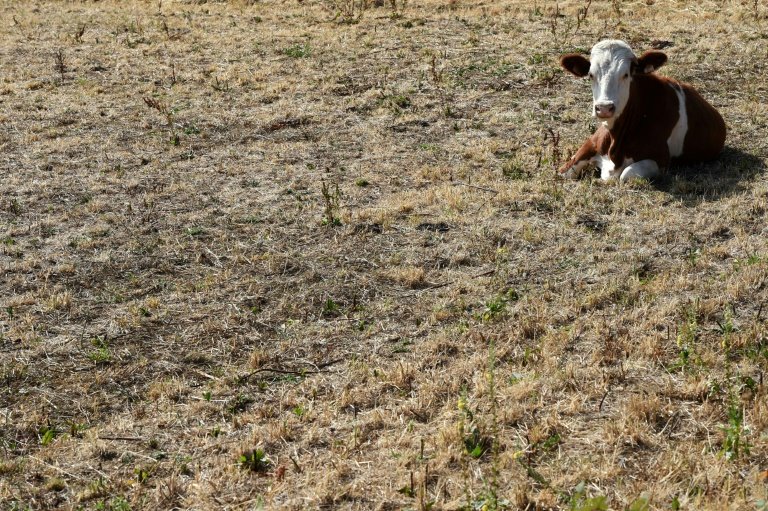 The EU will open its markets to South America agricultural products via quotas, sparking anger in France and elsewhere / © AFP/File

European farmers and environmentalists have denounced a historic trade deal signed between the EU and South American countries as a "dark moment", warning of unfair competition and dire consequences for the climate.

The European Union and South American trade bloc Mercosur sealed the blockbuster pact on Friday evening, ending 20 years of talks over one of the world's largest regional commercial accords.

Tough negotiations between the EU and the Mercosur countries -- Argentina, Brazil, Paraguay and Uruguay -- had repeatedly stalled because of European farmer sensitivities over the beef market.

Brussels said the EU's largest ever deal would save European companies more than four billion euros ($4.5 billion) in trade duties every year.

But shortly after its announcement, the agreement sparked an angry backlash including from the Copa-Cogeca union, which represents 23 million farmers across the EU.

"This deal will go down in history as a very dark moment," Copa-Cogeca secretary-general Pekka Pesonen tweeted.

"A deal encouraging double standards trade policy and widening the gap between what is being asked from European farmers and what is tolerated for #Mercosur producers."

Criticism was particularly strong in agricultural power houses like France and Germany.

The head of Germany's main farming union, Joachim Rukwied, on Saturday called the deal "totally unbalanced", saying it would threaten the livelihoods of "many family-run agricultural businesses".

Similarly, Christiane Lambert of France's biggest agricultural union FNSEA tweeted: "Unacceptable signature of a Mercosur-EU accord, which will expose European farmers to unfair competition and consumers to total deception."

French environmentalist and MEP Yannick Jadot said it was "shameful" of the European Commission to have signed a pact with Brazil's far-right and climate-sceptic leader Jair Bolsonaro.

Speaking on the sidelines of the G20 summit in Japan, French President Emmanuel Macron hailed a "good" deal, but said his government would remain "vigilant".

He welcomed that the yet-to-be-published accord explicitly referenced the Paris climate agreement and contained guarantees that it would "respect" the EU's environmental and sanitary standards.

But even within Macron's own camp, there was disunity over the deal, with MEP Pascal Durand calling it a "dark day". 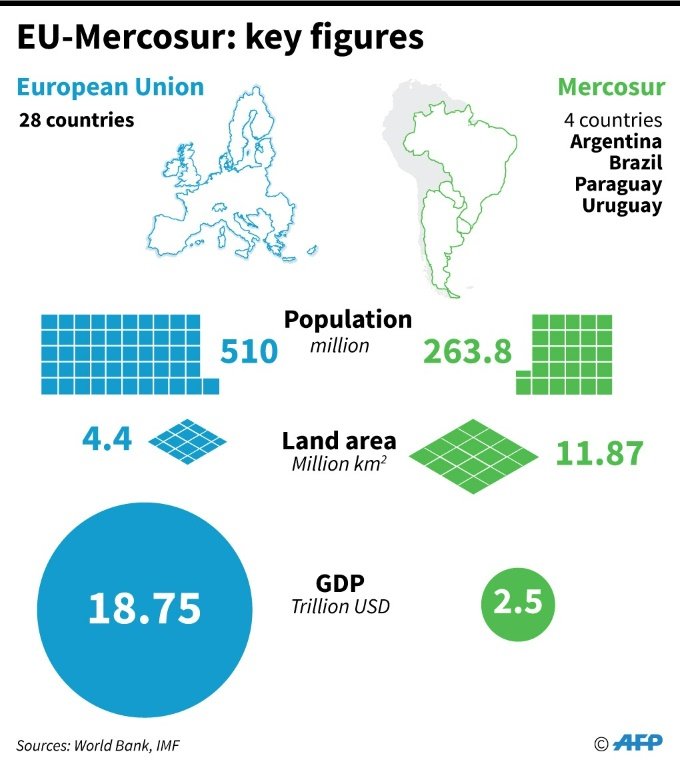 The main figures for the EU and Mercosur / © AFP

The pact -- announced in a climate of tension between the US and several of its bilateral trade partners -- covers markets that total approximately 780 million consumers representing a quarter of global GDP.

Once implemented, it is tipped to eliminate 99 percent of agricultural and industrial tariffs on both sides and facilitate exchanges in services and government procurement, reduce technical barriers, and effect sanitary and phytosanitary measures and intellectual property.

In its biggest concession, the EU will open its markets to South America agricultural products via quotas: 99,000 tonnes of beef per year at a preferential rate of 7.5 percent, a supplementary quota on 180,000 tonnes of sugar and another one on 100,000 tonnes of poultry.

Ireland's Agriculture Minister Michael Creed said he was "very disappointed" about these quotas introduced "at a time when the beef sector in Europe is facing significant uncertainty because of Brexit".

The Irish Farmers' Association was also upset, labelling the deal "a disgraceful and feeble sell-out".

EU Agriculture Commissioner Phil Hogan acknowledged the agreement presented "some challenges", but said the European Commission would provide up to a billion euros in support to farmers "in the event of market disturbances".