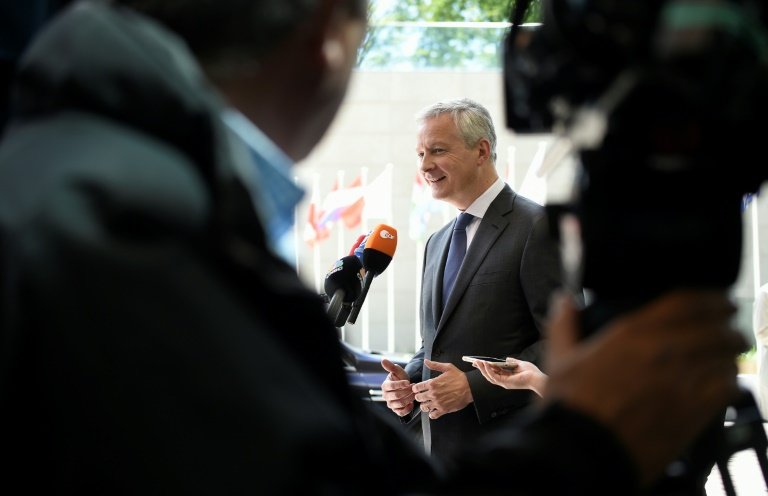 EU finance ministers agreed on the broad outlines of a eurozone budget early Friday, a key reform pushed by Paris that was scaled back amid deep resistance from the Netherlands.

French President Emmanuel Macron had championed the idea of budget, seen by many as a missing pillar in the single currency bloc almost a decade after the debt crisis nearly led to it tumbling down.

But his original proposal has been toned down by opponents, led by the Dutch, with the sensitive question of financing left unresolved and put off to a later date.

The Netherlands lead a group of richer northern eurozone members that fear a joint budget would serve to transfer wealth towards crisis-prone countries such as Italy, Greece or Spain.

"We did tonight what we had set out to do: we've created a genuine eurozone budget," French Finance Minister Bruno Le Maire said after more than 12 hours of talks.

"For the first time, we have created an operational budget that will help eurozone countries to converge and become more competitive. It's a breakthrough," he told AFP.

Other officials were more cautious of the deal's reach, with EU commissioner Pierre Moscovici acknowledging that the deal was incomplete and limited.

"Some would say we took only small steps... that may be true in a way," Moscovici told reporters.

"It's the best compromise with the present state of play in Europe. We must not forget that some countries, some ministers were against the word, the fact," he added, referring to the idea of a "budget".

Spanish Finance minister Nadia Calvino said: "I am convinced that there will be a eurozone budget. What we still do not have is 100 percent clarity on what the characteristics are."

The ministers' agreement is officially not called a budget -- which would be too politically sensitive in some countries -- but rather the Budgetary Instrument for Competitiveness and Convergence or BICC.

The cumbersome jargon came at the demand of the Dutch, who have accepted the instrument only on condition that it remains a modest affair and under the authority of the overall EU budget.

This is in opposition to the French and Spanish who would like the budget to be governed specifically by eurozone members who could step up contributions independently from the full 27 EU members (after the exit of Britain).

"No avenue for this budgetary instrument was closed yesterday... and this is the important thing," said Eurogroup chief Mario Centeno after the talks.

All sides agreed the final amount for the budget will be much lower than the initial hopes of the French president, who had envisaged several hundred billion euros.

Two European sources mentioned a budget of 17 billion euros spread over seven years between the 19 countries that use the single currency.

The compromise by ministers will be presented for formal approval to EU leaders at a summit next week in Brussels with hopes that the financing deadlock can be broken.

On the eurozone budget he added only: "Discussion on the finance of the BICC will continue at a later stage."

To please the northern countries, the ministers unanimously agreed that spending from the new budget would be strictly limited to pre-approved investment and structural reforms and not to help boost the economy during a downturn.

Payments would come with clear conditions, a statement said, much like existing EU structural funds and the austerity pushing bailouts for Greece, Portugal and Ireland.