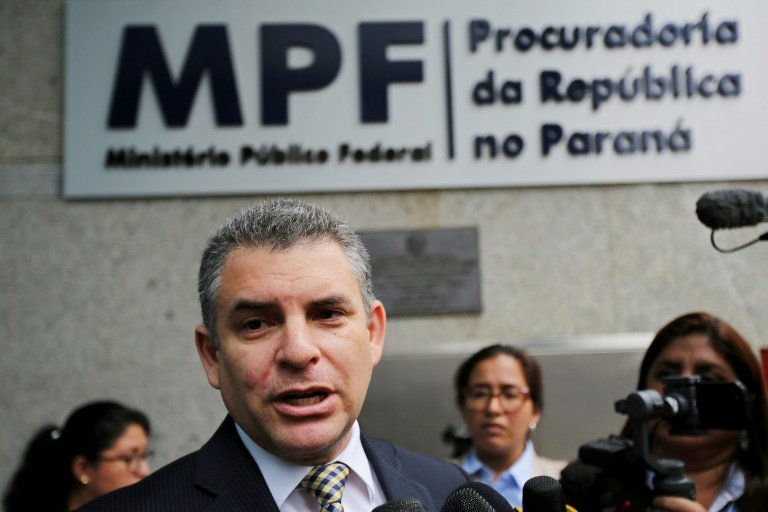 Jorge Barata, Odebrecht's former chief in Peru, provided details of "money routes" to Peruvian prosecutors who questioned him in the southern Brazilian city of Curitiba.

"Mr Barata has given an explanation of the money routes," said Rafael Vela, the lead prosecutor who questioned the former Odebrecht executive for a second day at Curitiba's federal prosecutors' office.

"We are absolutely satisfied with what he has said," Vela told reporters.

"The investigative hypothesis of the Public Prosecutor's office is being verified," he said.

He gave no details, but the influential Peruvian portal IDL-Reporters said Barata had confirmed Odebrecht paid more than $4 million to Garcia's aide Luis Nava during the ex-president's second term from 2006-2011.

According to the website, Barata told prosecutors that Nava "was the person who opened the doors to the Government Palace during Alan Garcia's term."

It said Barata had "agreed to pay Luis Nava $3 million" to ensure the Brazilian construction giant would hold the contract to build Peru's interoceanic highway, which links Brazil's industrial cities to ports on Peru's south coast.

Garcia, who was 69, shot himself dead at his home in Lima last Wednesday, as police arrived to arrest him over allegations of money laundering during his time in office.

Before his suicide, Garcia insisted he was innocent.

As part of the deal, Odebrecht must pay $182 million to Peru in civil reparations, an amount based on the four projects the Brazilian firm gained through paying bribes.

The company paid $788 million in bribes throughout a dozen Latin American countries to obtain major public works contracts over a decade, according to the US Department of Justice.

Barata's illicit payments to Nava were made in two instalments beginning in 2006, the website reported.

A second payment of 1.3 million was made through a bank in Andorra, it said.

The former Odebrecht chief said an additional payment of half a million dollars was made to Nava's son, according to the website.

Nava is currently in preventive detention in Lima as part of the investigation. He denies any wrongdoing.

On Friday, a Peruvian judge ordered Kuczynski held in pre-trial detention for up to three years as investigators look into allegations he received kickbacks from Odebrecht.