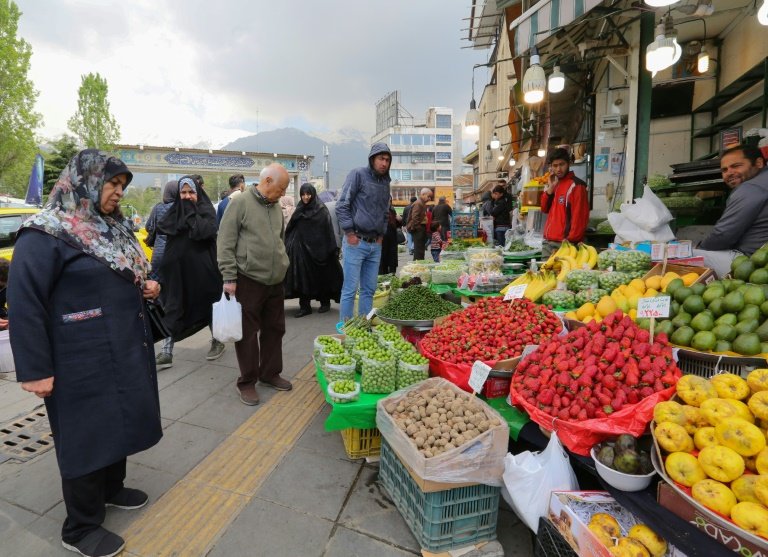 Iranian shoppers say inflation is putting pressure on food and housing prices, as they brace for more pain from US sanctions / © AFP

Iranians, already hard hit by punishing US economic sanctions, are bracing for more pain after Washington abolished waivers for some countries which had allowed them to buy oil from Iran.

"In the end the pressure (America) is putting out is on the people," said a 28-year-old technical instructor in Iran.

"Some have crumbled, and those still standing will probably give up when things worsen," he added, asking not to be named.

In 2015 when Iran struck a landmark nuclear deal with world powers, hopes were high that it would end the country's years of crippling economic isolation.

Thousands even flooded the streets of the capital, Tehran, to celebrate and hail Foreign Minister Mohammad Javad Zarif as he arrived back from tough negotiations in Vienna.

But those hopes were shattered when President Donald Trump withdrew the US from the accord last year and reimposed sanctions.

Pressure has piled up ever since, with Washington saying Monday it would sanction all countries that buy Iranian oil, in a move meant to squeeze Iran's main source of revenue down to zero. 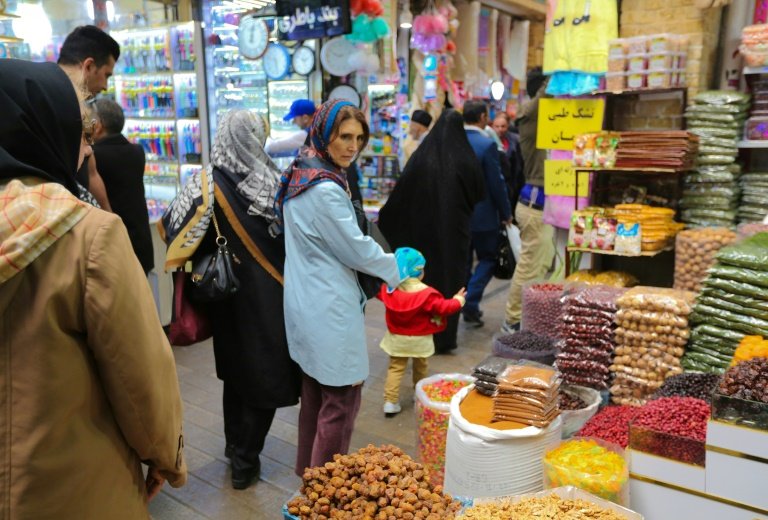 Iran's economy has been battered. Inflation has shot up, the country's currency has plummeted and imports are now vastly more expensive.

"The country's revenues will naturally reduce and maybe the rial will drop further," the instructor told AFP.

Analysts have put Iran's oil exports in March at around 1.9 million barrels a day, while the Central Bank had forecast revenue from oil sales in 2019 at around $10.57 billion.

Many of the country's woes pre-date Trump and the sanctions, however, as it has struggled with a troubled banking system, a stifled private sector and the lack of foreign investment.

Yet life continues at Tehran's Tajrish Bazaar, located north of the city.

On Tuesday people thronged the tight alleyways, drawn in by the tantalising smells of fresh vegetables and fruit as stall-owners shouted out prices, haggled with customers and hurriedly packed their goods. 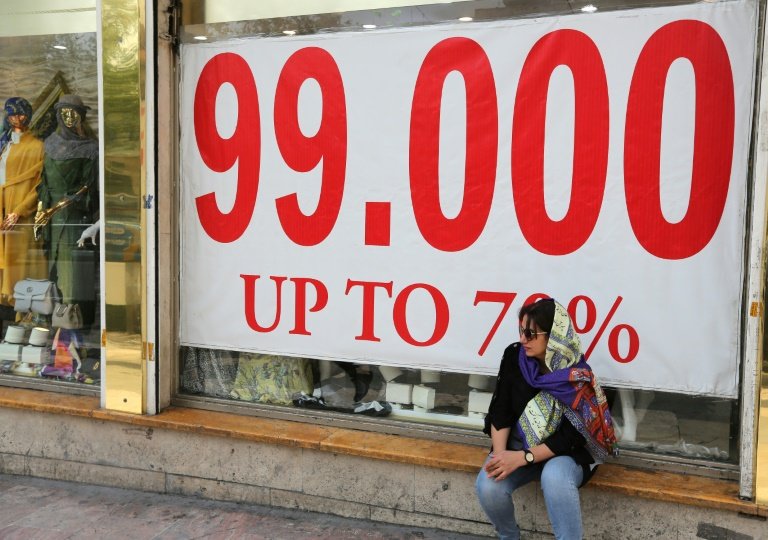 Iranians say they are struggling to make ends meet, with ordinary citizens bearing the brunt of rising prices / © AFP

But other parts of the bazaar selling non-essential goods such as pots, perfume and clothing were noticeably less busy.

"Have sanctions affected me? Which rock have you been hiding under all these years?" asked one irritated stall-owner, keeping an eye out for potential customers among the window-shoppers.

"We have a limited wage, you see. (When sanctions came back) we were forced to spend what was meant for food and meat on the rent that went up," she said.

Most people questioned by AFP asked to remain anonymous, and complained bitterly about inflation, saying they were especially pressured by growing housing and food prices.

According to the Statistical Center of Iran, overall inflation for the Iranian month of Farvardin (March 21-April 20) rose to 51.4 percent compared to the same month last year.

Food and services prices shot up by by 85 and 37 percent respectively over the same month. 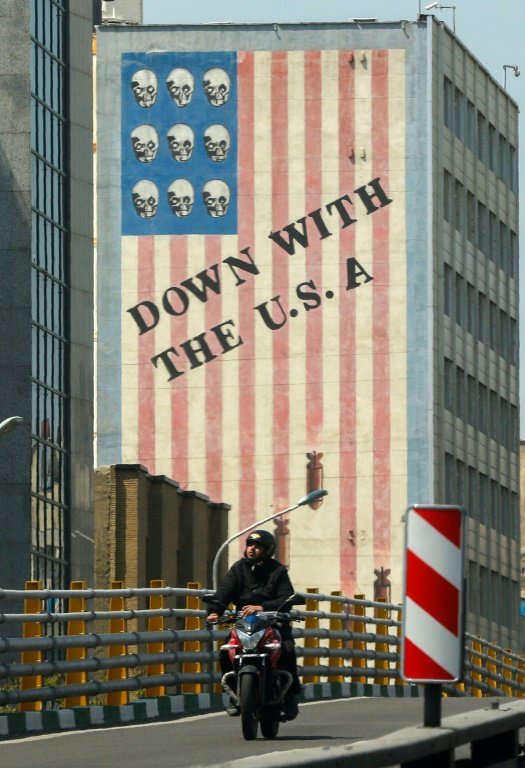 This has caused "the class gap to really widen. There is only rich and poor now, nothing is left in between," said the housewife.

"It will get worse. As ordinary citizens, we already expect prices to rise further" if oil exports reach zero, she added.

Iranians have also been forced to cut back on travelling, a tradition during the Nowruz, the Iranian new year which started on March 21, as prices grew out of many people's reach.

"Demand for trips, whether abroad or in Iran has dropped significantly."

For Zarif, the US move to sanction Iran's oil sales is another instance of what the Islamic Republic has repeatedly called "economic terrorism." 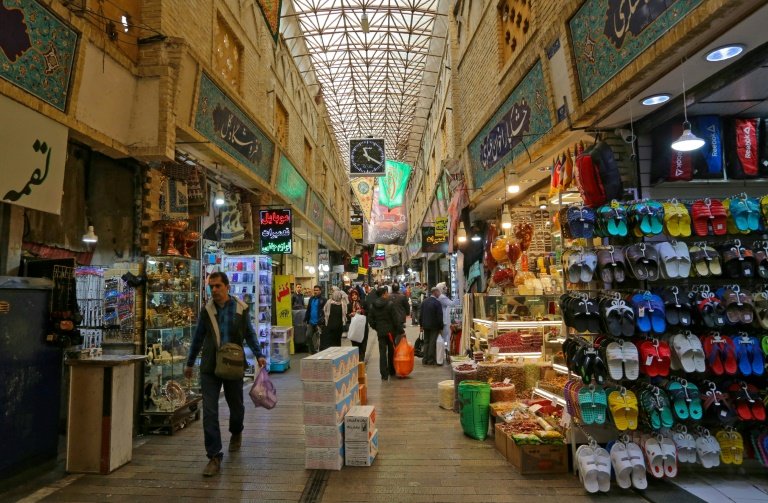 "Escalating #EconomicTERRORISM against Iranians exposes panic & desperation of US regime," he wrote Tuesday on Twitter.

The foreign ministry denounced the sanctions as "illegal" and said Iran was in "constant talks with its international partners including the Europeans".

Russia on Tuesday called the US tightening of sanctions an "aggressive and reckless" policy.

Other major sources of income for the Iranian economy are minerals, about $8 billion annually, and agricultural exports, at about $5 billion -- but it also imports large quantities of both, offsetting much of that income.

Oil Minister Bijan Namdar Zanganeh, however, has said he believes the US will not be able to block Iran from selling its oil.

"America's dream for bringing Iran's oil exports to zero will not be realised," he told lawmakers on Tuesday, ISNA reported.

"America and its allies have made a big mistake by politicising oil and using it as a weapon," he added. "Given the market's circumstances, (it) will backfire on many."