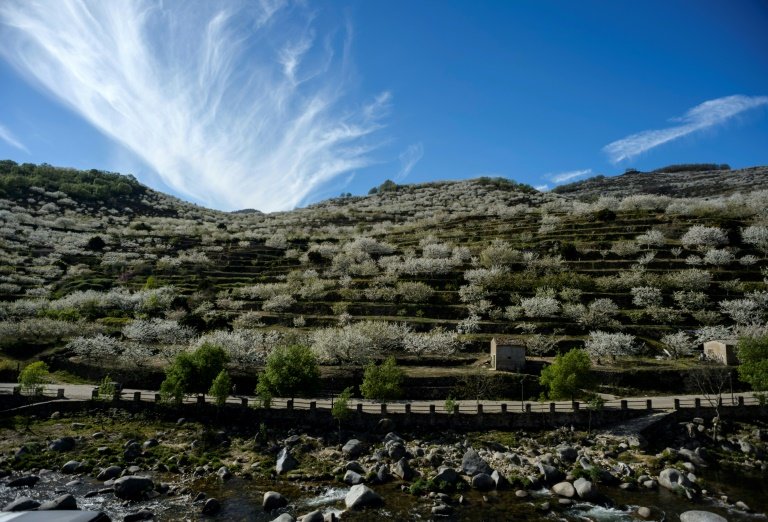 Positioned on the edge of a railway line, Villafranca de los Barros should be in prime position to move goods from its three factories. There is a slight problem though -- close to no trains come through.

So it is that products are transported by truck from this town in southwestern Extremadura, Spain's poorest region and also its worst connected, a major bugbear ahead of general elections on April 28.

Although nestled in the midst of vineyards, Villafranca depends more on the industrial sector than on agriculture.

While Extremadura as a whole is experiencing a population drain, it has managed to maintain this 13,000-strong town thanks to three factories -- one that makes bottles, the other cooking grills and a third that recycles aluminium.

But "the trains are slow and few and far between," says Joaquin Rodriguez, deputy mayor of the sun-baked town.

Spain's dense network of high-speed trains is famous in Europe. But its tentacles have yet to reach Extremadura, on the border with Portugal.

The trains that link the two provincial capitals, Badajoz and Caceres, to Madrid are antiquated and often break down.

To top it all, they're expensive, says Juan Carlos Lopez Duque, spokesman for the association Milana Bonita which campaigns for better trains -- an issue that has taken centre stage before the elections.

"It's cheaper to take the plane to the Canary Islands," a Spanish archipelago some 1,200 kilometres (750 miles) south of the mainland, he says.

Public Works Minister Jose Luis Abalos has promised that by 2020, hybrid trains will connect the region with the rest of Spain.

These trains can go up to 200 kilometres an hour and are powered by electricity and diesel, which is useful where there are no electrified rail lines, like in Extremadura.

The region was neglected during the 1939-1975 dictatorship of Francisco Franco, says Cesar Ramos Esteban, a socialist lawmaker in Caceres.

Spain's best cured ham, the world-famous "Jamon Iberico," comes from pigs that have fed off the green pastures of Extremadura.

Tomatoes are grown on its southern plains, making it the fruit's biggest producer in Spain.

It is the least developed region in Spain with the lowest GDP per capita and the highest unemployment -- 23.1 percent compared to the national average of 14.4 percent.

The successive regional governments, most of them socialist, have tried to ensure that everyone has access to public services no matter where they live, says Cesar Ramos.

He adds that in a region of one million people -- with a further 700,000 from the region living outside its borders -- they have battled to avoid villages dying off.

In Casas de Don Antonio, a village 40 kilometres south of Caceres where hundreds of white houses creep up a hill to group around the church, only 85 residents remain.

But there is a doctor, nurse and a medicine depot, says Pedro Macarino, 82, as he plays cards with three other retirees in the village's last cafe, which doubles as a shop.

Extremadura now counts two universities. Fifteen years ago, it was the first region in Europe to provide one computer for every two high-school students, Cesar Ramos says proudly.

"We were last on the starting line and we're still lagging behind, but we're catching up".

But he recognises that even if students are trained up, the region doesn't have the industrial structure to keep them.

Extremadura has always been a land of emigration.

Spain's famous explorers Hernan Cortes and Francisco Pizarro, who conquered Mexico and Peru, were from Extremadura.

For a long time in Spain, the word "emigrant" referred to people from Extremadura who would leave to find work in the northern, richer regions of Catalonia and the Basque Country.

And so it continues.

"You can study whatever you want, but it's really difficult to find a job," says Alvaro Crisolino, 34, an electromechanical technician who survived on unstable jobs for five years before leaving his town, Coria, to work in a factory in Madrid.

"We were 26 at school. Only five have stayed in Extremadura," he says.

"The others left for Germany, the Basque Country, Madrid or Barcelona."