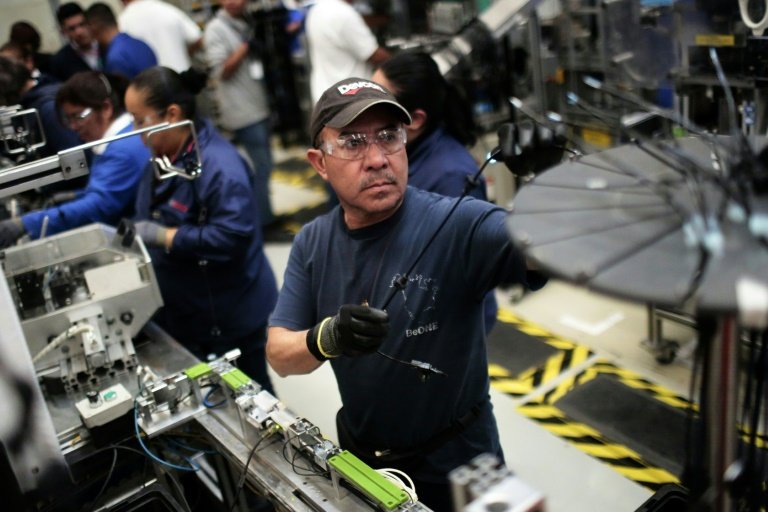 The North American trade pact signed last year will have a "moderate" positive effect on the US economy, an independent US government report said Thursday, an underwhelming endorsement as it faces an uncertain path to ratification.

And the trade deal could actually dent the US auto sector, slightly increasing employment but raising prices while reducing sales and manufacturing output, according the US International Trade Commission.

The report was released as President Donald Trump's administration instead unveiled rosy projections that the new trade deal would actually cause a boom in the auto industry, generating tens of billions in new investments and tens of thousands of new jobs within five years.

US Trade Representative Robert Lighthizer said Thursday that the report showed there was "no doubt" the trade deal was "a big win" for the US economy -- because the predicted gain was bigger than that for Trans-Pacific Partnership, from which Trump withdrew in 2017.

After a year of tough negotiations, Washington, Ottawa and Mexico City in November signed a new continent-wide trade deal to replace the 1994 North American Free Trade Agreement and revamp rules on manufacturing, digital commerce and labor rights, among other areas.

But the boost to the US economy "is likely to be moderate," given that most tariffs were already dropped region-wide 25 years ago and because the United States economy is much larger than those of Mexico and Canada, according to the ITC report.

Under the model used by the US ITC, total US GDP would increase as a result of the agreement by just 0.35 percent, or around $68 billion and the US should gain 176,000 new jobs compared to a scenario in which the current North American trade agreement remains in place, the report said.

"The model estimates that the agreement would likely have a positive impact on all broad industry sectors within the US economy," the report found.

Trade between the United States, Mexico and Canada is also likely to increase, according to the report -- with US exports rising by about the same amount as its imports from the two partners.

"It's positive," Jack Caporal, a trade policy expert at Center for Strategic and International Studies, told AFP. "It won't have a huge impact."

But in the auto sector, outcomes are not so upbeat.

The US auto workforce would rise by a net 28,000 workers yet prices would also rise somewhat -- actually cutting auto sales by 140,000.

Automakers would likely cease offering some vehicles as they become more expensive to produce, "which would ultimately decrease consumer choice."

Signed by the three North American countries in November, the USMCA makes sweeping changes to how autos must be produced in order to enjoy duty-free access within North America.

In particular, the share of a motor vehicle's content that must be produced in North America was raised to 75 percent and between 40 and 45 percent of the content must be produced by workers earning at least $16 per hour -- a rule expected to boost wages in Mexico.

Greater domestic production of auto parts would also "draw resources away from other manufacturing sectors and the rest of the US economy," the report found.

US imports of autos from outside the region would actually increase, it said.

But, in a separate report released hours earlier on Thursday, Lighthizer's office said auto manufacturers would instead invest $34 billion in the United States and add 76,0000 jobs within five years of the date the deal takes effect.

A senior USTR official told reporters that USTR's estimates were based on "hard numbers" manufacturers had given to the agency.

Prospects for USMCA's ratification in Congress face what could be an uphill battle, with Washington reportedly reluctant to lift punishing steel and aluminum tariffs so long as Canadian and Mexican authorities object to export quotas.

However, influential Republican Senator Chuck Grassley of Iowa told The Washington Post last month that the tariffs must come off before any vote on ratifying the trade agreement.

Caporal of CSIS said Thursday's ITC report was less likely to shift the balance of voting in Congress than it was to harden positions lawmakers have already taken.

"You might see people beginning to take more concrete positions."