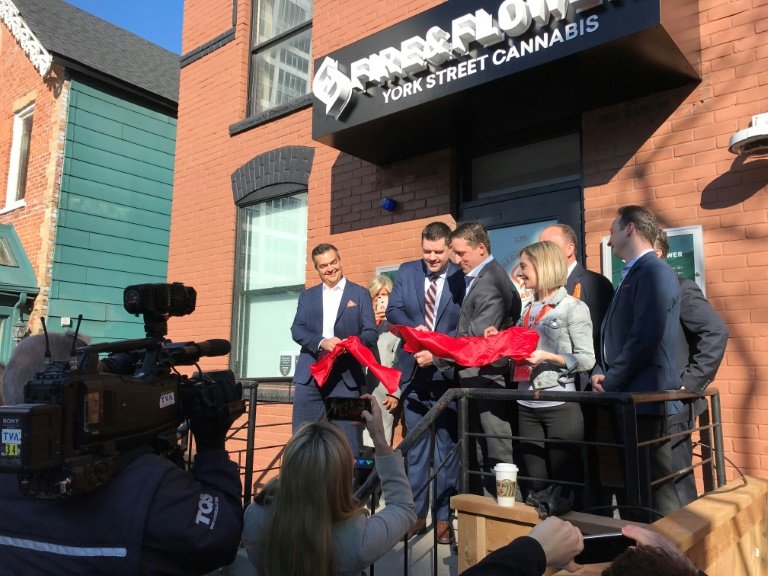 People gather outside during a ribbon cutting ceremony by the owners at the new Fire and Flower pot store on April 1, 2019 in Ottawa / © AFP/File

But authorities say the legal market will eventually put street dealers and criminal gangs out of work, once the fledgling industry finds its footing.

In October, Canada became only the second country in the world to legalize recreational cannabis, five years after Uruguay.

But six months on, people queue in long lines outside outlets, and supplies of many popular strains have dried up.

A patchwork of public and private online portals and bricks and mortar stores have popped up across the country, as each province rolled out their own marijuana retailing framework. 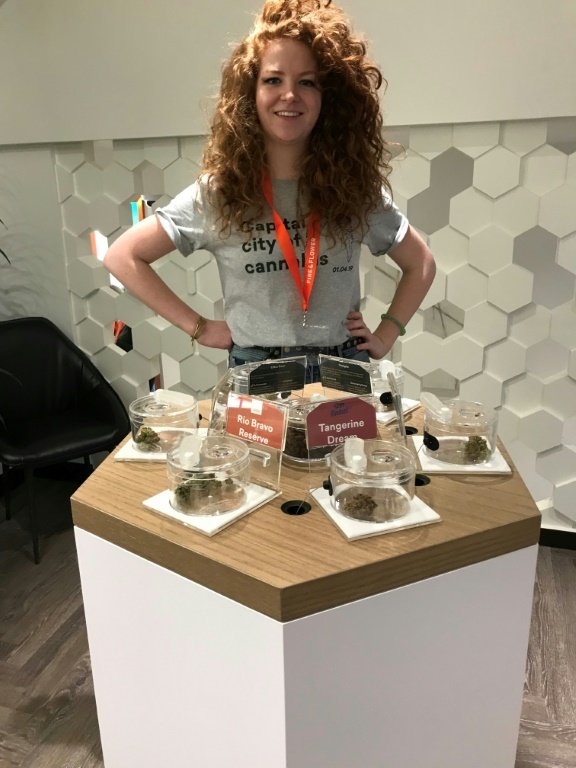 A store clerk stands ready to advise customers on the various marijuana strains at the new Fire and Flower pot store on April 1, 2019 in Ottawa / © AFP/File

Ontario -- the nation's biggest pot market -- was late to the game, opening only 10 stores out of 25 licenced in the province on April 1, relying until now on a government online portal.

"They're working through it and they're making progress," Blair commented. "And what we see every month is continued progress in displacing of the illicit market and creating a normalized supply chain."

Getting rid of the black market was a key objective in Trudeau's legalization plan.

Many feared a surge in drug-impaired driving and pot-related emergency room visits, but authorities said that has not materialized.

According to Statistics Canada, legal sales -- including medical marijuana, which has been allowed in Canada since 2001 but accounts for only a fraction of total consumption -- amounted to only Can$307 million. 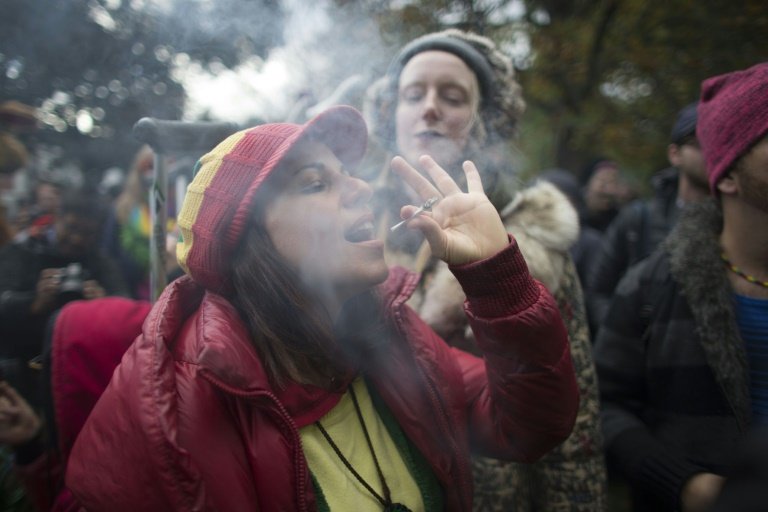 Authorities say the legal market will eventually put street dealers and criminal gangs out of work, once the fledgling industry finds its footing / © AFP/File

Canada has one of the world's highest rates of cannabis use -- with almost 15 percent of the population or more than five million people having consumed pot.

Its supply shortage can be explained in part by the heavy licensing process imposed by the federal government.

Another reason put forward is the relatively short amount of time growers had to ramp up -- about four months from the time the cannabis legalization law was passed by parliament to its entry into force.

As a result, the average price of dried cannabis in Canada has increased by more than 17 percent since legalization, to Can$8.04 per gram, according to the government statistical agency.

Buyers of legal pot are paying on average 57 percent more than for cannabis purchased on the black market, which actually saw prices fall.

"I've continued buying from my (illicit) dealer because the price of legal cannabis is outrageous," said John, who lives around the corner from downtown Ottawa's first legal pot store.

"I've been paying the same price for pot from this guy for the past 10 years so why would I go to a flashy new store and pay huge mark-ups," he said. "It just wouldn't make sense."

The store near him, Fire and Flower, raked in a whopping Can$50,000 in sales on its April 1 opening day.

In Montreal, Anna Kagadaeva, in her 20s, is more sanguine about the legal market.

"It took me a while before I came to the store because I was told there were lineups and there wasn't much selection," she told AFP.

But she now shops for weed regularly at Quebec's government-run stores because she finds them convenient and it's a safer, healthier and socially responsible choice.

"The supply situation is improving week by week" and "it will pick up significantly towards the end of spring," said Fabrice Giguere of the Quebec Cannabis Society (SQDC), after contracting six new suppliers.

His outlook was echoed by several cannabis company executives, who also predicted a drop in prices as supplies rise.

In Quebec, "our goal is to take 30 percent of the market by the end of October," Giguere said, adding that the SQDC is betting it can grow that figure to 70 percent in five years, displacing the black market.