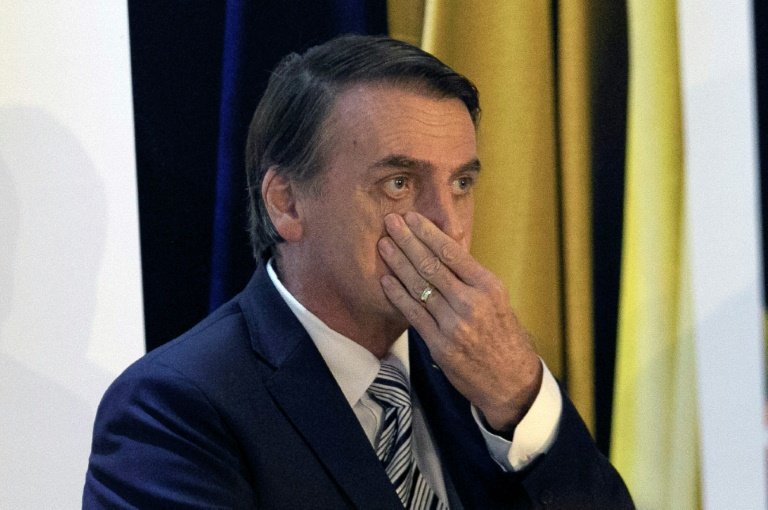 Brazil expects to save more than $300 billion over 10 years through a bill presented to Congress Wednesday that aims to overhaul the country's unsustainable pension system, the government said.

The bill, which requires constitutional changes to impose a minimum retirement age and extended pay-in periods for workers in both the public and private sectors, is a crucial plank of right-wing President Jair Bolsonaro's plan to overhaul Latin America's biggest economy.

Bolsonaro personally delivered the much-anticipated text to Congress, where he was jeered and booed by leftist deputies in the opposition.

"We are all counting on your abilities and your patriotism to save the Brazilian economy. We don't have any other option," he told the lawmakers.

Bolsonaro was to address the nation on the issue later Wednesday. Earlier this week he warned that pension spending would break Brazil's finances within four years if changes are not adopted.

In Brazil's biggest city of Sao Paulo, around a thousand people protested the "end of Brazil's pension system" in a first sign of how unpopular the changes might be.

Injecting pro-business vigor and removing sclerotic regulations were principal election pledges that propelled Bolsonaro into the presidency. He took office seven weeks ago.

"We need to change the rules of the pension system. People are living longer and women have fewer children, which means that the working population will decrease," Leonardo Rolim, the official responsible for pensions at the Economy Ministry, told a news conference.

Brazil is currently one of the few countries that has no minimum retirement age. Instead, workers can retire after contributing to the pension system for at least 35 years in the case of men, or 30 for women.

Under the proposed reform, the minimum retirement age would be set at 65 for men and 62 for women. Full pensions would be paid after 40 years of contributions, with access to partial pensions from 20 years of payments.

The new system would be phased in over a 12-year period.

The architect of the overhaul is Paulo Guedes, a US-trained free-marketeer who is Bolsonaro's economy minister. He had reportedly initially sought 65 as the minimum age for both sexes before Bolsonaro decided on a lower limit for women.

He and the government are concerned that Brazil's aging population will overwhelm the existing pension system. Official figures show that about nine percent of Brazilians were over age 65 in 2018 -- but will jump to 26 percent of the population by 2060.

"One of Brazil's problems ... is that there are people retiring at just over 50, and even younger in some categories such as police officers and teachers," observed Marcel Balassiano, an analyst at the Getulio Vargas Foundation.

The prospect of changes for those currently nearing retirement has prompted many Brazilians to look at doing so early.

That was the case of Silvia Oliveira, a 50-year-old secretary in Rio de Janeiro.

"I have paid in for 30 years, but I haven't reached the minimum age that the government wants. That's why I'm seeing if I can retire now, because I'm worried I might be made to work 12 more years," she told AFP.

Public spending on pensions accounted for 13.6 percent of GDP in 2017. If that trajectory is not altered, it could rise to 23 percent in 2060.

The government's room for maneuver has been crimped by a record-breaking 2014-2015 recession and subsequent tepid growth. The deficit in the pension system ballooned from 2.1 percent in 2011 to 4.3 percent in 2018.

According to the British economics consulting firm Capital Economics, the savings generated by the government's proposed reform would probably stabilize the public debt ratio at 90 percent of GDP by mid-2020.

The proposal "lives up to high hopes ... but history suggests that the legislative process could take time, and will ultimately result in the bill being watered down from its current form," the firm said in a briefing note.

Bolsonaro theoretically can count on a majority in Brazil's Congress, drawing on supporters in several parties. But to modify the constitution, he needs a supermajority of 60 percent of the lower Chamber of Deputies -- 308 of the 513 seats.

His vice president, Hamilton Mourao, said on Tuesday that he believed the government already has 250 votes and needs another 60 to 70 to get the bill passed.